The Book of Wonders 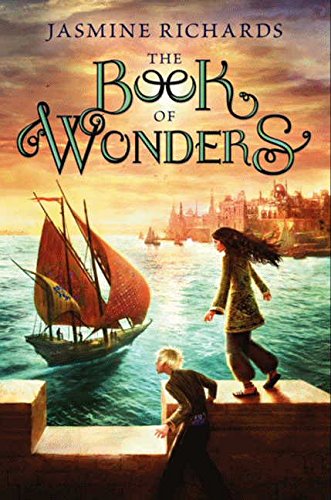 “The Book of Wonders displays a range of magic as expansive as it is imaginative. . . . debut author Jasmine Richards’ tale will provide middle schoolers with much pleasure—and perhaps a few furtive nights of reading with a flashlight under the covers.”

In her spirited debut novel, Jasmine Richards conjures up a maelstrom of magic and mystery, treasures and turmoil, as her appealing young protagonists pursue a thrilling quest.

Thirteen-year-old Zardi longs to sail the wide world in search of adventures denied to girls in her native Arribitha. Yet she never expected to find herself on Sinbad’s pirate ship with her best friend in a desperate attempt to incite the overthrow of the sultan who has abducted her sister and father.

This muscular plot will satisfy a modern young audience’s craving for action, even as it calls forth the ancient, fantastical Arabian Nights, with their magic carpets, flying horses, and a coveted lamp used to summon a powerful genie. For some of us, the most haunting aspect of those tales involves the premise under which they are told: the young bride Scheherazade prolongs her life each of 1,001 nights by creating a talismanic story for the sultan who plans to execute her, until at last his heart warms to her and his lust for blood dissolves.

Surprisingly, the novelist has constructed an equally chilling source of conflict: This tyrant’s idea of a good sport is to kidnap young women so he can pursue and kill them on his estate. Soon after Zardi’s sweet older sister Zubeyda disappears, the sultan himself arrives at her family’s home and coldly announces: “Zubeyda has now taken her place in the watchtower, and in ninety days time, as the sun reaches its zenith, it will be her turn to be hunted.” Shortly after that visit, the sultan throws the father in prison as well.

Ms. Richards plucks selected strands of the collection’s motifs in her novel to show her fictional heroes in fresh, sometimes unexpected prisms. Zardi, for instance, seeks to experience wondrous events rather than tell of them. Her name, we learn, is short for Scheherazade, and means “lion-born.” Courage will prove crucial in her subsequent confrontations with a barrage of obstacles: fierce storms at sea, the death of sailors, and exile on a mysterious island inhabited by wild creatures such as a brass giant and a terrifying Queen of the Serpents that reigns over a snake-filled kingdom.

While Zardi vows to rescue her sister and father, her silver-haired friend Rhidan aims to find the father he has never known. The two friends’ adventures begin as he leaps at the chance to join Sinbad, who appears to have some connection to the boy’s father. Yet the children find they cannot place much faith in the unpredictable sailor, in contrast to his mother Sula, a half-djinni who assists them in their journey.

The novel’s satisfying conclusion stops far short of unspooling Zardi’s fate. Will her brave deeds bring down the sultan too evil to live forever in a children’s fantasy? Unlike the trapped sister Zubeyda, we have more than 90 days to find out.

The Book of Wonders displays a range of magic as expansive as it is imaginative. In the course of their dangerous exploits, Zardi and Rhidan will discover a multitude of magical objects: an amulet, a ring, a Windrose, and a spelltrap, among others. Like the number of fearsome enemies, this list might seem excessive but debut author Jasmine Richards’ tale will provide middle schoolers with much pleasure—and perhaps a few furtive nights of reading with a flashlight under the covers.