The Book of Spice: From Anise to Zedoary 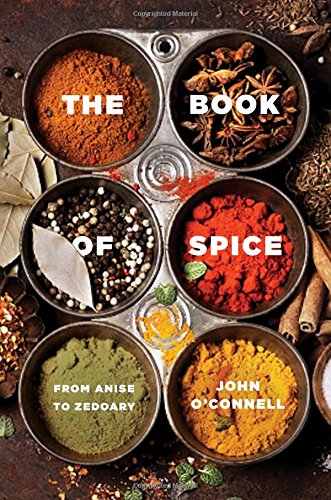 “what we have in common as citizens of the world is far more than what divides us. Maybe spices are the answer to world peace after all.”

If you are like most home cooks, your spice shelves are probably overflowing with all manner of spices that were once unfamiliar—let alone used—by the average cook. As our tastes continue to evolve and the kitchen becomes ground zero for assimilating an increasingly diverse society, a well-curated spice cabinet could become as important as a good wine collection.

And to go along with that well-curated spice cabinet, learning the backstory of the spices—just as you do with wine—will become the sine qua non for your cooking cred.

Enter John O’Connell, a one-time spice neophyte who has drilled down into the world of spices so you don’t have to. In his charmingly entertaining and thoroughly researched The Book of Spice you will learn all manner of interesting tidbits that will add a new dimension to your cooking.

First published in the United Kingdom in 2015, The Book of Spice explores the historical, botanical, cultural and (sometimes) political background of the spices we use every day. (Suffice it to say there is a lot of baggage packed into a humble jar of cinnamon.)

With references to recipes, literature, historical figures, and contemporary food writers and tastemakers, the book is decidedly framed by a British worldview. No matter, Americans will delight in learning about things like caraway seed cake, “which originated in East Anglia and was traditionally made in the spring to celebrate the end of wheat-sowing, when it was distributed among farm workers.” Apparently, it is a cake with all the appeal of (ahem) our American fruitcake.

It may also steer you toward some English food writers whose work is frequently quoted and whose voices have informed O’Connell’s work like Jane Grigson, Elizabeth David, and Dorothy Hartley as well as more contemporary food writers like Nigel Slater and Yotam Ottolenghi. This is the fun of reading about food through the lens of another nationality.

The aim of the book is “to tell a series of entertaining, illuminating stories about the role spices have played in the development of the modern world.” His introduction, which describes the role of spices throughout human history, is a fascinating read. Consider this: “Without the wealth generated by the spice trade . . . the Renaissance might never have happened.”

This isn’t a book to read in one sitting. Rather, it is a book to dip in and out of at leisure—perhaps as you are thinking about your next meal. While perusing your copy of Yotam Ottolenghi and Sami Tamimi’s Jerusalem, for example, stop for a moment and look up the entry for sumac, a lemony tasting Middle Eastern spice that most of us probably never heard of before Jerusalem became a bestseller.

Now that we are running through jars of the stuff as if it were common salt it is fun to learn that sumac comes from the berries of the shrub Rhus coriaria, commonly known as Sicilian sumac that grows abundantly in the Middle East. It is from the same family of shrubs or small trees as one of our native American sumacs (Rhus glabra) that grows freely along many U.S. highways. While North American sumac berries have not been used for cooking, Native Americans have used it for medicinal purposes to treat several common ailments like diarrhea, asthma, colds, and rashes.

This is what makes The Book of Spice such a pleasure: tracing the arc of any given spice throughout history and over continents to learn, once again, that what we have in common as citizens of the world is far more than what divides us. Maybe spices are the answer to world peace after all.