The Book of Rosy: A Mother's Story of Separation at the Border 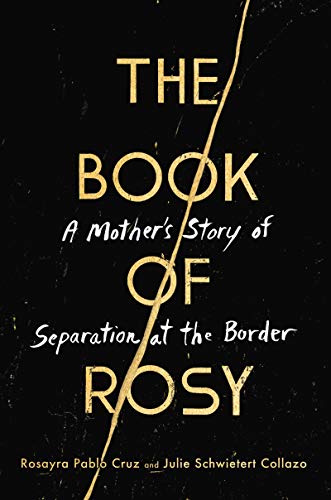 “How can those who read this compelling story of courage, commitment, connection, and love not want to share it with others?”

The Book of Rosy is a story by and about two remarkable women and how they came to connect with each other. It is also the story of an amazing grassroots organization and the Latin American women they have reunited with their children after being separated at the U.S. border. It is a story that will remain with readers, and likely motivate many of them to engage in advocacy and support on behalf of women and children who remain in the grip of America’s current policy toward asylum seekers.

Co-author Rosayra Pablo Cruz owned a small clothing store in Guatemala before coming to the U.S. She crossed the border with her two sons because she had survived an attempt on her life, and her older son was subsequently threatened. Separated from her children, she was sent to detention in Arizona, and her sons were put in foster care in New York. With the help of a grassroots organization called Immigrant Families Together, Rosy, who now lives in New York, was reunited with her sons. In February she was finally granted asylum.

Julie Schwietert Collazo is a bilingual writer, editor, and translator and the founder of the organization that helped Rosy. Dedicated to reuniting and supporting immigrant families separated at the US/Mexico border, the organization’s story is extraordinary.

It all began with Yeni Gonzalez, also an immigrant mother from Guatemala whose three children were taken by ICE agents and transported to New York. When she was unable to pay a $7,500 bond, a group of American mothers led by Julie, who heard Yeni’s story from a lawyer speaking on NPR, quickly mobilized to raise the bond money. Then they arranged to transport Yeni safely, state by state, to New York. There she was reunited with her children and Immigrant Families Together (IFT) was born. To date it has raised over a million dollars and paid over 100 bonds.

When she recalls the early days of IFT Julie remembers thinking of the words of Dr. Martin Luther King, Jr. at the site where he delivered his 1967 speech, “Beyond Vietnam”: “Over the bleached bones and jumbled residues of numerous civilizations are written the pathetic words, ‘Too late.’ There is an inevitable book of life that faithfully records our vigilance or our neglect.”

But it is Rosy’s telling of her story that is stunningly moving as she describes the magnitude and the impact of the human tragedy taking place still. Here she remembers the horrific journey north. “The trip is long enough for your stomach to struggle to accept food and water when you finally have access to them again. . . . The journey is long enough for you to make choices that, when you think about them later, fill you with disgust, like eating mangoes full of worms or drinking dirty water from a creek where cattle stand to cool off. You grip the mango with both hands . . . and you’re so ravenous, you don’t even avoid the worms.”

Of the agony of detention, she writes, “In my short time here, I have seen women go crazy with hysteria. They curl up on their bunks and refuse to leave their cells. They cry without ceasing . . . bottomless wells of tears. I have seen them shut down, becoming shells of who they once were. I have seen them lose their will to fight, their will to go on. . . . I ache for my two boys, of course, but if I let my tears flow, I will become one of those women, hanging on the edge of her own being, and then, what will I be able to do to get my boys, who have been taken from me, back into my arms?”

Her description of the icebox detention cells is as chilling as the cells themselves. “Months from now,” Rosy writes, “when there are news stories about children dying in the icebox I won’t be surprised.”

As she concludes her story, Rosy writes, “This is the immigrant experience I wish people could see, not because it’s my experience, but because it’s the story of so many of us, coming to the United States to escape violence and to build lives in which we will contribute to society. . . . We want to be part of your American dream. We want to help you realize it. We want to share it with you.”

How can those who read this compelling story of courage, commitment, connection, and love not want to share it with others?