This Book Is Not for You! 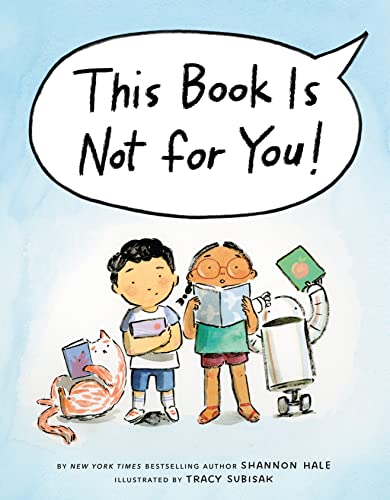 Stanley’s enthusiasm for Bookmobile Day is quickly slayed when the substitute librarian embarrasses him because the book he wants to read is about a girl. The stage is set for New York Times bestselling author Shannon Hale’s This Book Is Not For You! with themes of letting children choose what they want to read including books outside of their own experience. With drama beyond absurd, Stanley is discouraged from his book choices as a grumpy geriatric librarian suggests he only pick a book meant for a boy.

As the story unfolds, however, what starts out as humorous ends up being over-the-top ridiculous. And while this absurdity is meant to illustrate a kind of censorship, it becomes a maddening distraction while also depicting the librarian as a mean and narrow-minded stereotype of an older person. Stanley reaches for a book, “but the old man pulled it back. No, I didn’t mean for you, young man. Then for who? Stanley looked behind him. A tabby cat was padding up to the bookmobile.” The cat could have a book about cats. A robot could have a book about robots. And Stanley had to choose a book with a boy main character.

Stanley ends up with a book selected by the out-of-touch librarian (who is simply not believable as a modern-day character). Clearly not what he would have chosen for himself, he settles under a tree with his friend Valeria, who is reading the book Stanley originally wanted, along with the cat, robot, and various other animals that fancy reading. Thankfully, the kids decide to trade books, and they immediately get lost in the enjoyment of the stories they selected.

Cartoon-like illustrations done in ink, watercolor, pastel, and colored pencil by Tracy Subisak are fun and engaging and add a graphic novel touch to the book. The turning point of the story, when an allosaurus visits the bookmobile is particularly hilarious. “Good afternoon. I would like to check out a book about ponies!” The obtuse and scared librarian isn’t sure what to do, “B-B-But . . . But only ponies can read about ponies.” With the help of a dinosaur who chooses a book not about dinosaurs, Stanley gathers the courage he needs, “This book [with a girl main character] sounds interesting so I would like to check it out.”

Now the librarian, with enormous eyebrows that constantly obscure his vision (in more ways than one), sees cats reading books about robots, robots reading about cats, and a dinosaur reading about ponies. He agrees to let Stanley finally choose his own book, and he ultimately joins the reading menagerie with a book of his own—about goats. Perfectly suited perhaps for an old goat (who warms up in the end).

While the intention of This Book Is Not For You! is admirable in trying to show the harm in enforcing a read-in-your-own-lane mindset, the execution suffers from unrealities that would frustrate most savvy child readers. The absurdities are just too absurd.