The Book of Nonexistent Words 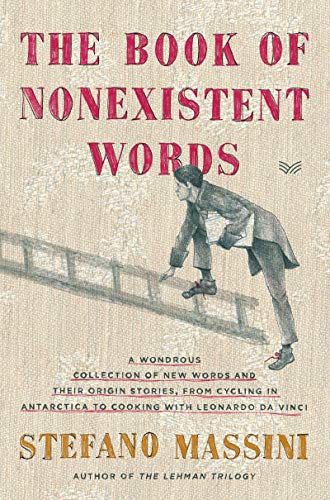 “a book that would be treasured by the collector of trivia, appreciated by the English major, and relished by anyone enjoying explanations of the dramatic twists and turns a word takes before it becomes embedded in our own particular language.”

How does one compile a book containing nonexistent words, when, by its very definition, a book contains nothing but words existing in one language or another?

Stefano Massini does exactly that in his Book of Nonexistent Words, as, in his introduction “The Words You Don’t Have,” he explains his discovery of the need to invent those words where an exact meaning is lacking.

“It really began with Enoughness, also called Morosinitude. Don’t go rushing to the dictionaries—you won’t find those words there for the simple reason they don’t exist. The same with all the words set out in this book. I’ve invented them myself.”

Massini goes on to explain that at a point in his life, he realized he didn’t know how to use language to say what he meant.

“It’s a fact that language is never neutral; it implies a system of values, and it applies them tyrannically, choosing what to define and what to leave unnamed.”

With that in mind, he then lists these words we don’t have, alphabetically, beginning with Annonism and ending with Zeissian, 29 multisyllabic creations that don’t exist anywhere except in this volume (unless someone uses them and starts a fad, that is).

With a history, reading like a quote from a book of trivia, he recounts the story of the person, place, or thing, from which the word is derived, and what interesting sources those accountings are! King louis XV’s minister of finance, a young seaman who was lifted aloft 2,000 feet because he accidentally tied himself to a line attached to a hot air balloon, the origin of the Bic ballpoint pen.

Some of the fanciful creations include:

Dottism (noun). Derives from the nickname of author Dorothy Parker (1893–1967). Indicates the supreme gift of those who are able to transform whatever drama, calamity, or prejudice into a comic interlude, and therefore, always into a triumph.

Henriettude; also, Alfonsinity (nouns). Derived from the female mountaineer Comtesse Henriette d’Angeville (1794–1871) and the cyclist Alfonsina Morini (1891–1969). Denotes the unequal comparison between men and women, in which the victory of the latter is reduced, debased, and invalidated.

Oatism (noun). Derived from the psychologist Wayne Edwards Oates (1917–1999). Denotes the transformation of a job into an object of worship, and therefore the religious celebration of ourselves not as human beings but as holders of a position.

Questic (adjective). Derived from the Antarctic expedition of the Quest (1921–1922). Described the condition of someone who sets himself major objectives in life but does nothing to prepare to achieve them.

Tautonaic (adjective). Derived from the TauTona gold mine in South Africa. Indicates the obsessive search for something good, so dazzling that it leads you to waste your life doing the exact opposite.

These vignettes are interspersed with explanations of words having actually embedded themselves in our language, such as Luddite, coined from the actions of Ned Ludd, the first English worker to vent his anger against a steam-powered invention—or Faradian, from the treatment scientist Michael Faraday received from his mentor’s wife, who treated him as a servant even after he was honored by Queen Victoria and lodged at Hampton Court.

“Nouns derived directly from specific names; each word hides a story and its discovery takes us to the root of its meaning.”

There is also an Afterword, in the form of Notes from the translator, Richard Dixon.

Entertaining as well as intellectual, The Book of Nonexistent Words is accompanied by apt illustrations. It is a book that would be treasured by the collector of trivia, appreciated by the English major, and relished by anyone enjoying explanations of the dramatic twists and turns a word takes before it becomes embedded in our own particular language.

As for the meanings of Enoughness and Morosinitude?

Morosinitude (otherwise called Enoughness) (noun). Derived from Francesco Morosini, a seventeenth century Venetian commander (1619–1694). Indicates the sublime virtue of someone who, in the face of a pointless battle, has the courage to pull out.