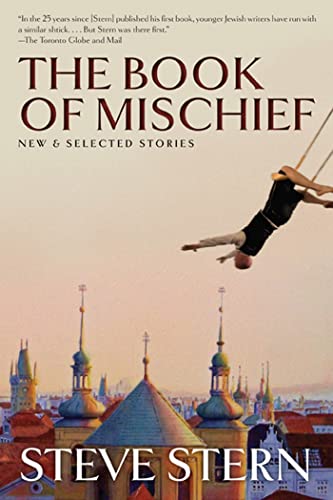 Steve Stern’s catchy, well titled, and well written collection of short stories, The Book of Mischief, is a wonderfully imaginative group of tales steeped in Jewish folklore and inspired by such writers as Sholem Aleichem, Isaac Bashevis Singer, Bernard Malamud, and Woody Allen—there is even some Borscht Belt humor sprinkled throughout.

The Book of Mischief includes both new and previously published stories organized geographically into different sections including, “North Main Street, Memphis,” a lesser-known Jewish quarter of the Pinch in Memphis; “The Lower East Side, New York;” “Europe;” and “The Catskills.”

Though many of the stories take place in the early 20th century, some cover other time periods, including modern day Prague and New York. All of the stories have an old world feel but cover a lot of ground.

Many of the tales in The Book of Mischief are influenced by Jewish folktales and often sound as if they had been passed down through generations by word of mouth. The tales include elements of magical realism, the supernatural, trickster figures, and the world of dreams.

For instance, in the story “The Tale of a Kite” a flying Rabbi is described: “Even from such a distance it is hard to deny it; around the corner of the next block, something is emerging from the roof of the railroad tenement that houses the Shpinker shtibl. It’s a wispy black and gray something that rises out of a propped-open skylight like vapor from an uncorked bottle. Escaping, it climbs into the cloudless sky and hovers over North Main Street, beard and belted caftan aflutter. . . . Then it’s clear that, risen above the telephone wires and trolley lines, above the water tanks, Rabbi Shmelke floats in a doleful ecstasy.”

Some of the stories fuse the old or even ancient and the new such as “The Lord and Morton Gruber,” a modern rewriting or even a satire of the Biblical story of Jonah. Morton Gruber, “czar of a string of lucrative coin-operated laundries” is address by God, in the form of a flame emerging from his tea kettle, to spread the word of doom.

Mr. Stern writes: “’It’s God, Morty,’ repeated the flame, modulating itself to a milder blue blaze, ‘and you’re going to be my prophet.’” And further, “’There was a lottery in heaven and you won,’ came the voice, sardonically. ‘What’s the difference? I’m the Lord and you’re my prophet. Now get off your tush and spread the word.’”

The story “Zelik Rifkin and the Tree of Dreams” opens with lovely images: “Even by the infernal standards of the Memphis summers, this one was unnaturally hot. So intense was the swelter in the flats above the shops on North Main Street that the wallpaper bubbled and the menorah candles melted into shapes like choirs of ghosts.”

Author Stern is not above including rather crude humor and grotesque characters such as in his stories “Legend of the Lost” and “The Ballad of Mushie Momzer.” But for the most part his humor is of the classic Jewish or Borscht Belt variety.

For instance, in the story “The Sin of Elijah,” the first person narrator, Elijah, introduces himself: “Somewhere during the couple of millennia that I’d been commuting between heaven and earth, I, Elijah the Tishbite—former prophet of the Northern Kingdom of Israel, translated to Paradise in a chariot of flame while yet alive—became a voyeur. Call me weak, but after you’ve attended no end of circumcisions, performed untold numbers of virtuous deeds and righteous meddlings in a multitude of disguises, your piety can begin to wear a little thin. Besides, good works had ceased to generate the kind of respect they’d once commanded in the world, a situation that took its toll on one’s self-esteem; so that even I, old as I was, had become susceptible from time to time to the yetser hora, the evil impulse.” Elijah’s language and tone reflect a sort of ironic, self-deprecating, world-weary Jewish humor.

Steve Stern is unquestionably a very talented writer possessing a fabulous imagination and a deep knowledge of Jewish folklore, language, and history.

Though all over the map, his tales reflect a very insular world. The stories in this collection are laden with inside jokes that might feel overwhelming or oppressive when read consecutively or in just a few sittings for The Book of Mischief is a bit much at times. But who am I to say? Enjoy!