The Book That Matters Most: A Novel 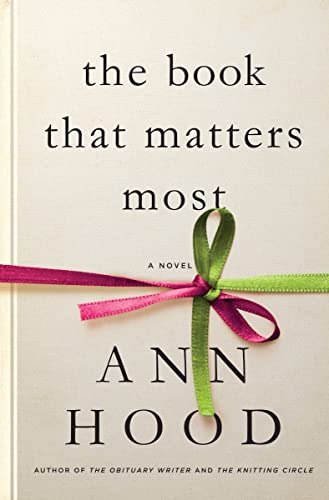 Newly divorced and facing the inevitable friend loss that often accompanies separation, Ava Tucker is feeling unmoored: “She was surprised by how much she longed for company. Not just for company, but for something more, a deeper connection to people.” To soothe that itch, she begs for admittance to the Provincetown library’s book club, hoping to tap into a long-dormant love of stories. There, she joins nine other members in devouring books that are important to each of them and finds solace and wisdom in the pages of great novels.

The Book That Matters Most, Ann Hood’s newest novel, explores the importance of literature to the human condition, loss, love, and finding one’s own identity in the world. Weighty stuff, especially when combined with the parallel story of Maggie, Ava’s troubled daughter, and her descent into drug abuse on the streets of Paris.

Hood is up to the challenge. Ava’s year-long journey is relatable: after 25 years of faithful marriage, her sense of disconnect and anger when her husband leaves her for another woman is palpable and believable. During the course of the story, she travels from sorrow, to anger, to resignation at the loss of this most important relationship.

Hood introduces several characters that are, or become, important in Ava’s life, but none is as important as Maggie. Again, Hood does a nice job of detailing a believable parent/older child relationship, especially in recognizing that facts are easily obscured as children grow up and move outside of the parental sphere. Maggie’s descent into addiction is heartbreaking (and is perhaps the most interesting part of the story)—even more so is how easily she can hide it from her mother.

Hood’s narrative descriptions are lovely: “He was inside her house. He was inside her bed. This man—this boy—whom she didn’t even like. But she had not been kissed in a year; not kissed like this, with passion and yearning and desire, for longer than she could remember. She was embarrassed by her body, her thickened middle-aged waist, her breasts that sagged. She wanted to tell him that she would read The Great Gatsby, that she would . . . what was the phrase? Run faster and stretch her arms out farther.” She gives both gravitas and lightness to Ava and to her story by recognizing both the vulnerability and the wisdom of age and loss.

Ava’s book that matters most, the theme of that year’s book club discussions, is a story of a lost child and a grieving mother, chosen because it came to mean a lot to Ava in the childhood year when she lost both her mother and her sister. Her search for the author of the book becomes tied into Ava’s search for self (and tied to Maggie’s redemption—a nice, if less likely, touch). The flashbacks to Ava’s childhood are less successful than the main story. Not much of it is important to the main story; those bits that are would have been better handled as part of the main narrative.

The framing conceit, a series of discussions of books that matter most to the various book club participants could be a good starting point for those looking for good books to read. The discussions themselves are perfunctory and tend to slow the narrative; it might have been more effective to note Ava’s reactions to the books and move on.

This is a book comfortably in the sphere of the older reader. Hood seems to have a disdain for the “tatted and pierced” generation; Luke, her younger lover, becomes a joke, his porkpie hat and chin beard used as literary shorthand for hipster and foolish. This prejudice might limit the appeal of this novel to younger readers. Maggie, though, could draw them back. She is the shining star of The Book That Matters Most.

Ann Hood’s The Book That Matters Most ends on a high, if unbelievable, note, which would have been more effective if not telegraphed early on. Still, it’s a comfortable, well written, snuggle down in your rocker and enjoy the fall leaves sort of novel, a nice love story to books and family relationships.