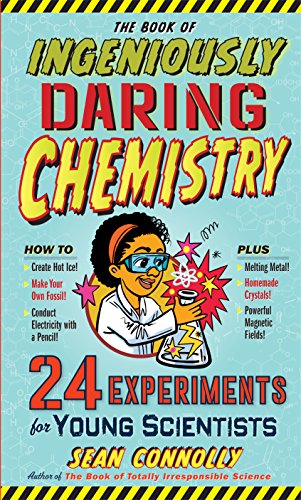 Daring Chemistry is one of a series of science books designed for young readers (ages nine and up). The author has written a number of books for children and adults, including the Totally Irresponsible Science series. The purpose is to combine the excitement of science with a fun approach to the topic.

Connolly takes a number of the more interesting elements to form the foundation for the 20 chapters of the book. In each chapter, the basic properties of the element are covered, along with a brief history of the discovery of the element (usually with some mention of the discoverer), and some comments on how the material is used. There is also an experiment described that involves the element in some way or another. Usually, the experiment does not require the element itself (that would often be very dangerous), but focuses on a reaction involving a compound containing the element under discussion.

Basic principles of chemistry are not overlooked. Scattered in and among the material about the elements are some descriptions of the structure of atoms, the organization of information in the periodic table, and some brief material about how elements react through the gain or loss of electrons. Placement of elements in the periodic table is a common theme that gives the student a better idea of how the different elements relate to one another.

One interesting section at the end of the book is the “Dirty Dozen.” These are elements that do have useful applications, but are also known to be very hazardous. Among them are plutonium (used in nuclear weapons); radon (formed from the decay of radium; and uranium, found throughout the environment); cadmium (found in electronics components); and arsenic (has many uses; thought to be the cause of Napoleon Bonaparte’s demise).

The experiments that accompany the chapters run the gamut from interesting to “really stretching the point.” The hydrogen example does not even use hydrogen. The student draws a diagram that illustrates the massive amount of space in an atom, by showing how far the hydrogen electron is from the nucleus at the atom. Another experiment using helium (obtained from a party store or supermarket) shows that helium is lighter than air. The effect of temperature on the ability of helium to rise is illustrated. The electrical conductivity of graphite (carbon) is demonstrated using a very simple set-up. This apparatus could easily be used to explore the conductivity of a number of different materials such as iron or copper.

A useful glossary is included that defines terms and organizes the chemistry vocabulary. Whimsical sketches illustrate some of the points of the text and lighten what could be a somewhat tedious read for many young people.

The Book of Ingeniously Daring Chemistry is an enjoyable addition to the genre of children’s science literature.

Don Calbreath bought his first guitar for $10.00 in 1958 and never looked back. Five guitars later (he presently owns a Martin D-28 and a Fender resonator guitar for slide blues), he has enjoyed playing privately and for small groups. Close friendships with talented guitarists have both improved his skills and enhanced his enjoyment of this “small orchestra” (Andrés Segovia).