The Book of Esther: A Novel 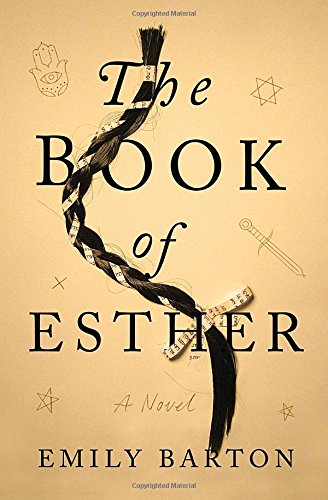 “Recommended for anyone who enjoys a literary novel, werewolves and golems notwithstanding.”

Emily Barton blends feminism and Jewish mysticism in an alternate history of World War II to create a story that fascinates and compels one to ask “What If?”

In August of 1942 only the Khazar kaganate, a nation of Turkic warrior Jews, stands between the advancing army of Germania and a city those in the West call Stalingrad. Josephus ben Malakhi, Khazaria’s  kender or chief policy advisor, recognizes the danger of invasion, but he hopes Khazaria forces can protect the nation’s borders until help can arrive, possibly the Turcii or soldiers from Rus.

Esther, the oldest daughter of Josephus, knows more of the danger to Jewish lives that Germania poses. She, along with her younger adopted brother, Itakh, regularly visits the huge refugee camp outside the city walls, where thousands of Jews fleeing the advancing enemy troops have taken refuge. She has listened as Rukhl, a refugee woman in the camp, tells of what has happened to the Jews who did not flee. “They take people there to shoot them and bury them in shallow graves.”

Esther confronts her father and his circle of advisors after eavesdropping on their meeting. “You’re standing around arguing with each other when you need a plan.”

Esther outlines what she believes should be done: requisition the mechanical horses, Khazaria’s principle cavalry, along with moto-trucks, and send them against Germania’s troops, supported by airplanes and naval ships along the rivers. She also advises them to enlist the aid of the Uyghurs, a criminal tribal organization that controls the oilfields.

As Esther faces the angry men “An inner voice said, I am Esther, and like my namesake before me, I will save the Jewish people.” She does not speak this thought aloud but instead blurts out “I want to fight.”

Josephus ejects Esther from the meeting, appalled that a woman dares to give advice on military matters, or on any matters, to men. Women have no place in policy meetings or in any gathering held by men. As for women joining the military and fighting beside men, such a thought is unthinkable.

Her father’s refusal to listen to her and his brushing aside her desire to fight to save Khazaria do not deter Esther. She will find another way, even if it means she will disobey her father, and that Shimon, her fiancé and future Chief Rabbi, may cancel their marriage.

With only vague directions Esther and Itakh travel across the steppes, stopping first with the Uyghurs to buy gasoline for Seleme, and receiving directions to Yetzirah, the kabbalist village. There Esther hopes the Jewish mystics will use their powers to transform her into a man, so she may lead her people in the coming battle with Germania.

Esther and Itakh reach Yetzirah, but her efforts to make the transformation into a man with the help of instructions from Amit, a young kabbalist, fail and she remains a woman. But the kabbalists suggest another way; an army of golems, gigantic creatures made from clay and animated by mystical rituals. They neither eat, drink, nor sleep. They never tire, and more to Esther’s purpose, they cannot be killed unless blown apart.

As Esther leads her army of golems back toward Khazaria’s capitol city of Atil, she gathers volunteers, including Uyghurs, to increase her numbers. As she comes closer to Atil, she has many things to ponder. If she loves Shimon, why is she so powerfully attracted to Amit? Why should Itakh be claimed as her adopted brother, while at the same time he is her father’s slave? Why must Itakh be denied schooling and allowed only a tiny room without windows?

One question that troubles Esther is whether or not Golems have souls. They worship God and follow Jewish customs, including keeping the Sabbath holy, but Amit insists they are only animated clay and cannot have souls. Esther is not so certain.

Gimmel, a golem with influence over his fellow creatures, tells Amit that “We, who possess only the breath of life that you breathed into us, nevertheless can judge between right and wrong.”

As Esther arrives with her army, the enemy is already on the attack. In vivid language author Barton describes the battle between the forces of Khazaria and those of Germania, not avoiding the details of death among Esther’s army and the price that liberty demands.

Barton succeeds in making such fantastical creatures as werewolves, mechanical horses, and golems as real as the physical landscape she describes. More subtle, but equally as believable is the relationship between Gimmel’s belief that he is more than animated clay, and Esther’s belief that her identity as a woman is more than the version society allows her.

Although the fantastical elements in The Book of Esther may startle the reader at first, the realistic human characters who believe in those same elements draw one into this eloquently alternate history. Recommended for anyone who enjoys a literary novel, werewolves and golems notwithstanding.