The Book That Changed America: How Darwin's Theory of Evolution Ignited a Nation 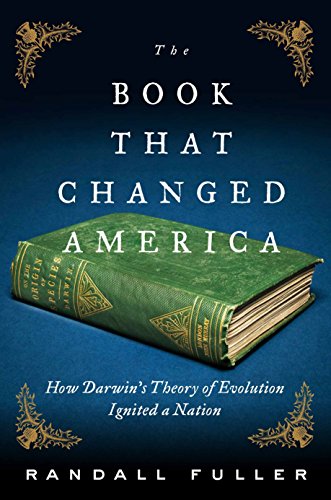 “Fuller’s explanation of the effect of Darwin’s theory certainly will stand as a fascinating example of the impact of scientific work on popular theory.”

For centuries, civilization has been split between those who believe devotedly in religious mysticism and those who would entrust a role to scientific empiricism. Scientists, such as Galileo, would suffer for their commitment to natural, observable facts and the principles derived from them. For many others—certainly the vast majority of humankind—the abiding reality was, and remains, spiritual. Today, more than 40% of all Americans believe in pure creationism—that God created humans in their present form 10,000 years ago. Another 20% believe that God has guided every step of the evolutionary process. Faith continues to conquer fact.

These spiritual convictions are not difficult to understand. Creationist dogma is not the result of folly or ignorance. It is part of the canon of belief in the divine. It is impossible for anyone to ignore the central reality of human life—that it is time-limited. No one escapes death. Religion in its various shapes and forms is the only way fully to understand the cycle of life, in particular what happens to each of us all after our demise.

English naturalist and geologist Charles Robert Darwin proposed the most important factual theory explaining the existence and development of the multiplicity of species in all their forms and diversity across the globe. His On the Origin of the Species, published in 1860, had a profound effect on biologists, religionists and philosophers in particular in America.

In The Book that Changed America, Randall Fuller, Chapman Professor of English at the University of Tulsa, focuses on the impact of Darwin’s theory of natural selection on America’s leading thinkers of the middle of the Nineteenth Century.  Centered in Concord, Massachusetts, Thoreau, Emerson, Alcott and Gray wrestled with Darwin’s explication of the historical development of flora and fauna that had the potential to shatter the prevailing religious ethos.

Fuller’s text demonstrates his fluency as a scholar both in American literature and of the state of scientific study at the time. He writes with genuine erudition, placing Darwin’s theories in context. Fuller’s subtitle—How Darwin’s Theory of Evolution Ignited a Nation—is somewhat hyperbolic, however. America in 1860 was consumed not with natural selection, but with the Nation’s original sin: human bondage. Abolitionists used Darwin’s theory to promote their revolutionary notion that Southern overlords and their African chattel were both humans of the same level and ancient origin.

America on the edge of the Civil War wrestled with the seemingly unsolvable problem of how to address Southern slavery. It had become evident that the status quo was intolerable. Southern slaveholders insisted on maintaining their “peculiar institution,” while a growing number of Northerners found slavery insufferable. Although they were not ready to take up arms to eliminate the nation’s cancer, Northern abolitionists found in the martyred body of John Brown a symbol of righteousness. They found in Darwin’s book about birds, bees and trees a scientific treatise that could offer a justification—not based on individual morality, but on provable scientific fact—that all men were created equal.

Ultimately, even Darwin’s acolytes in Massachusetts and beyond could not avoid the dominant religious philosophy in applying the principles of evolution. Unable to accept fully the notion that natural selection was the result of pure chance, they inserted God into the equation, either as the original force that set it all in motion or as the monitor that insured that change would follow His direction. Thus, Darwin’s book became simply an instruction manual based on scientific observation.

Fuller’s explanation of the effect of Darwin’s theory certainly will stand as a fascinating example of the impact of scientific work on popular theory. More importantly, the clash of fundamental attitudes that he explores has modern day implications. The battle between fact and faith is as contemporary as today’s headlines or tweets. Apparently, America will be ruled by the minority of its population that does not believe there is such a thing as a fact and that all news is “fake news.” Combining this prevailing cynicism with the absence of a sincere commitment to fundamental principles, America is once again on the edge of the chasm. This time there is no text like Darwin’s that will pull us out of the morass.