A Book of Bones: A Thriller (Charlie Parker) 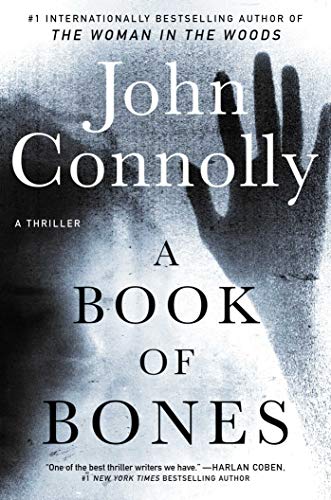 John Connolly’s recent book, A Book of Bones, is difficult reading for several reasons—its extreme length, its wandering story arc, and its disappearing protagonist, just to name a few.

The story is a continuation of his last book, The Woman in the Woods with the same antagonists and the same general idea. The story opens with Connolly’s protagonist, Charlie Parker, called to Arizona by FBI agent Edgar Ross to identify a female body found in the desert. Asked to identify if this woman is Pallida Mors, a woman who stinks of death (one of the antagonists from Parker’s most recent excursion into the dark side of life), he confirms that this is not Mors.

And so, the search begins for a “transcontinental hunt for an apocalyptic fanatic.” It should be noted up front that Connolly has developed two of literature’s most horrific antagonists in Mors and Atol Quayle, a man unable to die; and as a result, a man who “may be trying to bring about the end of the world,” and the man whom Mors takes her direction from.

Placing the body in Arizona is a ruse to throw Parker off the trail, but it only confirms to him that he still has work to do to find these two people.

Ross agrees to Parker’s plan to continue the search, wherever it takes him and at whatever cost, and so Parker gathers his team—Louis and Angel, and he adds a new character Bob Johnston, who arrives as a carryover from the end of the previous book.

At the basis of the story is Quayle’s search for the mysterious Atlas—a book that has a humanity of its own; a book that changes lives every time it is viewed or touched; a book that will determine the catastrophic future of the world—and most important, a book that will allow Quayle to finally die. And Johnston’s value is that he is a book expert whose experience with antiquarian books will prove invaluable in the search for the Atlas.

To prevent Quayle from achieving his goal of world destruction in order to die, Parker must follow the trail of dead women across the ocean. And the dead women are many, and they are not just killed, they are slaughtered. It takes 635 pages to learn why these women must die: “because their deaths might be enough to bring the Atlas’s reality into being.”

As women are murdered throughout The Netherlands and England, Connolly’s cast of characters grows, including the characteristics of locations where the women’s bodies are placed. Each death throws light on religious cults and locations. Connolly has given even the ancient churches a life of their own, each that dabbled in the status of the Atlas.

Although the story follows this general arc, Connolly has created so many new characters and places and organizations, and detailed so much backstory for all of them, that the story wanders through a maze of history and crime that leads the reader off track. The story would have potential were it not for these extensive backstories.

While it might be said that some of the information adds depth to Parker’s chase, one wonders if it could not have been done with less extensive wandering detail. It is not until one reads over 400 pages that the story actually starts to pick up speed.

One of the most discouraging things about reading A Book of Bones is that the main protagonist, Charlie Parker, seems to get lost in the mist – disappearing for too many pages and too many chapters – while other new characters have their own story to tell. Charlie’s role as the major protagonist fails.

It should be noted that Connolly writes grisly murder scenes that can disrupt one’s sleep! Now, thrillers are expected to have some grisly scenes, and that is all well and good, but in this book, one loses count of all the murders that take place—good guys, bad guys, and so many in between.

Connolly’s research of real places is excellent; his description clear and visual. His characters are well-developed, and his writing style creates a good story. Perhaps in the next Charlie Parker adventure, he will shave off a paragraph or two of backstory and give Charlie and his other characters more visibility on a regular basis.