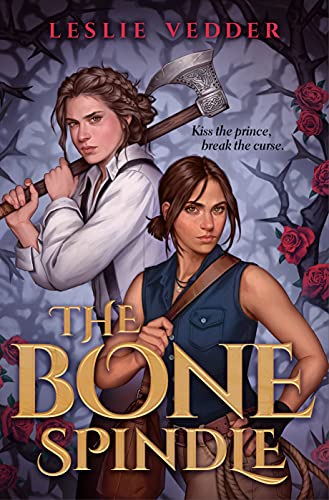 In this genderbending and queer retelling of Sleeping Beauty, treasure hunter Fi finds herself tasked with saving the cursed prince Briar Rose. Unwillingly assisting Fi on her quest is axe-wielding Shane, a runaway princess turned mercenary for hire.

In the decades since Prince Briar Rose pricked his finger on a spinning wheel and fell into a deep sleep, the surrounding areas have moved on. Witches and magic users, once beloved rulers, are now hunted—blamed for the Spindle Witch’s destruction and Briar’s curse. With witches on the run, there are many old, abandoned buildings with lucrative treasure to be found—treasure for those wily enough to decode ancient languages and avoid magic bobby traps.

Fi is a treasure hunter with a love of ancient languages, ancient books, and riddles. Chasing forbidden texts that may hold the key to undoing her butterfly curse, Fi stumbles into an unusual ruin containing a spinning wheel. She pricks her finger and is immediately bound to the sleeping prince Briar Rose, whom she is now tasked with saving.

Although initially disinterested in the prince, Fi finds herself with mercenary-for-hire and ex-princess Shane as a companion. Both women continue running from their pasts and toward an uncertain future, and get tangled up in romance and magic along the way. Not, mercifully, with each other.

The book balances Tomb Raider adventure with two distinct romance lines, and it is in differentiation between these romances that the book truly shines. Books that feature both heterosexual and homosexual love interests often fall to mirroring styles, where the courtship appears functionally the same regardless of the pairing. The Bone Spindle, however, shows a surprisingly intuitive understanding of lesbian and straight girl romance culture.

Shane’s romance is dangerous, mysterious, and filled with bold moves and bold kisses.

‘“So sweet, but I’ll be fine.” Red threw a look over her shoulder. “I’m dangerous, remember?’

“Her voice was playful, but there was something about her that sent a thrill down Shane’s spine, her breath catching as Red’s eyes locked on hers.

“’Shane,’ the girl said again, rolling the name over her tongue like she was tasting it, ‘I won’t forget it.’ Then she sauntered away, her fiery cloak swirling as she disappeared into the trees.

“’See you around, Red.” The name sizzled on Shane’s tongue like a spark.

“Mystery and danger—everything she loved about taking on a ruin, all wrapped up in a stunningly beautiful girl.”

Fi’s, in contrast, is slow, sometimes silly, and almost innocent, letting Fi make her own choices and never once robbing her of agency, despite the curses.

“Briar rolled onto his side, pinning Fi with a solemn look. ‘I could probably glow if you wanted me to, though.’

“’Please don’t!’ Fi spluttered, annoyed with herself for taking Briar seriously for even one second.

“Briar shrugged, that little twitch at the corner of his lips looking suspiciously like a victorious smile. He shifted onto his back. ‘I wouldn’t want to ruin this view, anyway.’”

“Fi glanced up. It was a clear night, but it didn’t strike her as anything special. Still, as she climbed into her bedroll, she couldn’t help stealing another glance at Briar, his eyes fixed on the velvet sky. Without meaning to, she found herself picking out constellations, tracing the invisible threads of connection that held distant stars together. Maybe she and Briar were connected like that, too—part of some larger constellation invisible to them.

Vedder also delivers several outstanding friendship scenes between the two lead characters as they grow to trust one another.

‘’’I won’t let you wear it,’ Shane promised. ‘Luckily, I don’t see your name anywhere on this costume, and his little lordship didn’t think to send a note, so I guess that makes it mine.’ Shane stood up fast, seizing the butterfly outfit and shaking it out. ‘I doubt Armand will get nearly as much pleasure from seeing me in it,’ she said with a grin. ‘And you don’t have to worry, because I will wear the hell out of this dress. I am going face-first into the refreshments, and I am going to work up a hell of a sweat. When I’m through, no one will ever be able to wear this dress again.’”

Although the ending of the book comes abruptly and with resolution only to Fi’s romance (leaving Shane’s arc only partially fulfilled), The Bone Spindle is otherwise an enjoyable YA fairytale book. Readers will delight in the familiar legends woven into a female-centric storyline. Although treasure hunter Fi is the lead character, Shane definitively steals the spotlight with her troubled royal backstory, battle ax, and bad attitude.