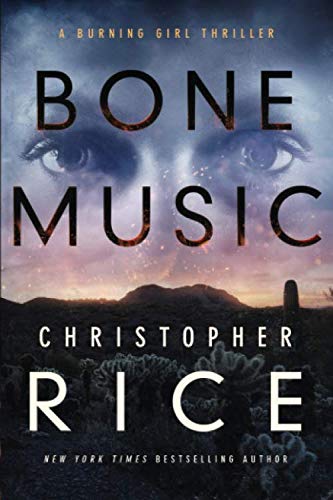 “A fantastic start to a new series that will have the reader wondering how author Rice can top this first entry.”

Charlotte Rowe is trying to live down the first seven years of her life, during which she was abducted and raised by a pair of serial killers.

“People make so much of the fact that two of the most notorious serial killers in American history couldn’t bring themselves to kill a baby. It blinded them to what the Bannings really did to me, which on some days seems much worse.”

Today, she’s struggling for a return to normalcy with the aid of Dr. Dylan Thorne, who’s appointed himself her unofficial psychiatrist.

“The most astonishingly handsome man she’s ever seen. The kind of handsome that seems two-dimensional and unreal.”

Now Dylan wants her to do something she’s avoided. Take a drug.

Against her better judgment, Charley takes it. On the way home, she’s run off the road by bikers. To her surprise, she subdues them easily. When she arrives home, she discovers a so-called admirer, a serial killer in training named Jason Briffel, has gotten inside. She takes care of him as easily as she did the bikers.

“She feels no pain, none of the bone-rattling, stomach-churning agony that should follow a double blow. Instead, she feels the tingling all over her body, and a foreign sensation: bone music. It feels like the bass line of some song is being played inside her very bones.”

She calls Dylan. He admits he put Jason up to attacking her, to see how Zypraxon works. It isn’t really a depressant at all, and she’s his guinea pig.

“It’s a miracle, that’s what’s coursing through her veins. A miracle and it wasn’t put there by someone pretending to be a therapist. It was put here by something bigger than her.”

When Cole Graydon, head of Graydon Pharmaceuticals, is contacted by Dylan about the results of a drug the company had been working on but abandoned when it proved fatal to the test subjects, he’s prepared to ignore him. The temptation of having a test subject that not only has survived, but is doing impossible things, is too tempting, however.

With the weight and money of Graydon Pharmaceuticals behind him, Cole sets out to determine for himself what the drug can do, and what should be done if this young woman turns into a danger to herself and others.

Charley has her own plans, however, and it involves a serial killer called the Mask Maker. Observed with surveillance equipment by Cole, she enlists the help of her grandmother’s old boyfriend and his AA pals, an FBI washout and childhood bully turned repentant friend, and his fugitive-from-justice hacker brother, to track down the Mask Maker and put an end to his reign of terror. She’ll prove to Cole, Dylan, and everyone she can control the drug, and it doesn’t control her.

In doing so, she sets herself on a dangerous quest.

This novel is divided into four very disparate parts that nonetheless make up a very entertaining whole.

Part One is more or less a psychological drama: An infant raised by psychopaths attempts with the aid of a psychiatrist, to fit into the normal world and escape her notoriety. Only when she discovers he’s lies to her by giving her an untested drug does she abandon his advice.

Part Two is more or less an industrial espionage thriller. A pharmaceutical corporate CEO struggles to prove he can run the company as well as his deceased father. He’s seduced by a brilliant employee who absconds with a newly developed drug that has so far killed all those on whom it was tested. When his former employee/lover contacts him with new results on the drug, he has a choice to make: Join forces or stop him. This segues into Part Three, becoming a forceful police procedural with the young woman on whom the drug is tested discovering her new powers and deciding to track down a serial killer.

Part Four? That draws all the threads together in a way losing no momentum between each.

While all the characters are well-drawn, remarkably believable, and surprisingly sympathetic, the character of Dylan Cody immediately draws the readers’ attention. His description: “Brilliant guy. Gorgeous. Superman in scrubs,” sends up immediate signals that this man is going to be either the hero of all heroes to Charley or the most evil villain imaginable. In the end, there are no true “good guys or bad guys.” Dylan and everyone else become more than their initial introduction suggests. They’re all transformed into different characters than as originally portrayed.

If there’s one complaint about this novel, it’s the presenting of most of it in the annoying first-person present tense. Other than that, it’s a fantastic start to a new series that will have the reader wondering how author Rice can top this first entry.