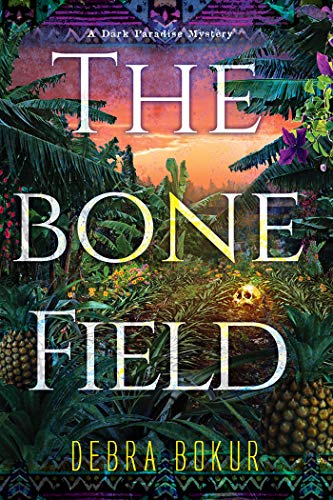 Kali Mähoe, a detective with the Maui Police Department, is summoned to a scene on Lana’i island where a corpse has been found stuffed in a refrigerator that was buried on the grounds of a now defunct pineapple factory. The corpse is nothing more than a skeleton and now several decades old, and its head has been removed and replaced with an ornate wooden carved pineapple.

A good start to a mystery series. But in order to get to the full premise of the story, the reader has to wade through a lot of Hawaiian history, family history, a cock fight that has nothing to do with the story, and a pregnant, drug-addicted young woman who was almost Kali’s stepdaughter but also plays no part in the storyline.

If one sets aside these distractions, the premise is a good one. More bodies are discovered buried in the same property and as Kali and her coworkers further their research to discover the identities of these individuals—two men, one woman, and an infant—they are led down a rabbit hole of red herrings and foreshadowing, and they uncover some good clues.

Their research takes them to a religious cult directed by an overbearing leader. It doesn’t take them long to discover the sexual abuse of the women of the cult, but the women who won’t say anything against the leader.

Bokur develops her protagonist, Kali, and her antagonist, cult leader Abraham Waters, with clarity and dimension; her secondary characters could use more depth. The dialogue between Kali and Abraham in several scenes is very good and goes further into developing each character.

Her detailed Hawaiian history is interesting but at times a bit too detailed, taking the reader away from the story. Bokur’s descriptions of Lana’i island could use more of the other four senses to deepen the descriptions but are visually strong.

During her scenes that focus on the story premise, the pace of the story moves well. The climax scene with the protagonist in a life-threatening position is well developed. The scenes that are disconnected from the story, however, tend to drag the pace.

In addition to Makena, the pregnant drug addict, there is a character who had almost nothing to do with the story: a blogger and podcaster named Chad Caesar. Apparently, he is designed just to be an annoyance to Kali, but Bokur’s development of this character missed an opportunity. He appears far too few times.

Bokur’s fans may not agree with this review, but she missed the mark with this book. She has a good story that needs tightening—delete the scenes that have nothing to do with the story; more character development would improve it considerably and the story would move quickly.

It should be noted that the last 24 pages of the book are the first few chapters of Bokur’s next book.