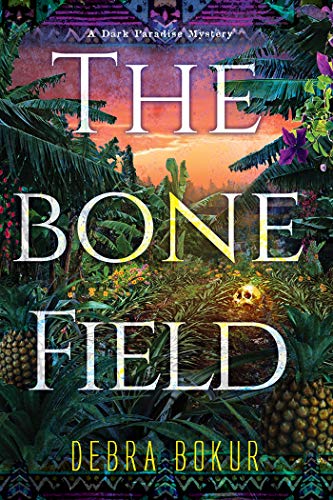 “The truth about the bodies buried in the pineapple field will reveal a convoluted history of abuse, coercion, identity theft, and murder.”

There’s trouble in paradise when a pair of tourists, looking for old coins with a metal detector, instead find an old refrigerator with a headless corpse inside.

“Resting on the corpse’s narrow shoulders, in lieu of a skull, was a large, ornately carved wooden pineapple. A macabre adornment that gave no sense at all of who the long-dead figure might have been.”

Sent to the scene, Kali Māhoe of the Maui Police Department, is well aware that Lāna’i has a dark history.

“Lāna’I, so green and peaceful, was steeped in dark myth and violent legends and whispered of man-eating spirits that stalked the living.”

Preliminary investigation tells her the refrigerator is one manufactured in the ’60s and ’70s, as were the victim’s clothes. Forensics searching the dirt around the hole in which the appliance was buried find a clue: a small anchor charm.

Since the field in which the corpses were buried was once a pineapple plantation owned by the Shandling Fruit Company, that’s where Kali’s investigation starts.

Many people on Lāna’i had worked in the pineapple fields, so Kali tries to find some of them. She interviews Bill Bragden, the father-in-law of one man, Matthew Greene, who was a scientist sent to Hawai’i to test a new soil fungicide.

Bragden has a lot to say—that Matthew mistreated their daughter and might even have killed her, though the verdict was an accident—but he can’t tell them of Matthew’s whereabouts.

“I went to talk to him, but he wasn’t home. His house looked as though he’d simply gone out and forgot to come back.”

Kali recalls reports of plantation workers falling ill, and many cases of cancer with rumors that the sprays used on the crops were the cause, sprays that might have hastened Bragden’s daughter’s death, also.

Could this lonely old man have killed his son-in-law in retaliation for his daughter’s death?

When Kali shows Bragden a picture of the little anchor charm, he recognizes it. Eden’s River, a commune in the area used it as their symbol.

When Kali talks to Bobby Keawe, a retired Maui County cop, she learns more about Matthew Greene’s disappearance, as well as the commune called Eden’s River.

“They were basically a bunch of pains, banging on people’s doors to share their view that native Hawaiians are all godless savages who need to be saved from practicing native witchcraft.”

More investigation will reveal that certain members of Eden’s River also disappeared around that time. Eventually, this information brings Kali face to face with the founder of the group, a disgraced high-profile surgeon, still leading his followers under a new name and in a new location.

Eventually, the truth about the bodies buried in the pineapple field will reveal a convoluted history of abuse, coercion, identity theft, and murder. Along the way, Kali will finds herself the object of a zealot’s wrath, not only an officer of the law, but as the presentative of everything considered hostile to the Eden’s River teachings.

The allusions to Hawaiian history and mythology add a layer of reality to this novel, and as well as being interesting, may pique the reader into doing his own research into the story of the Hawaiian Islands.

Kali’s background isn’t so easily explained. Though references are made to her losing the man she loved—and there’s a subplot in which she tries to care for the man’s druggie daughter only to have the girl fade out of the story at the ending—as well as the teachings of her grandmother, spiritual leader of her family, who passed the knowledge to her granddaughter to carry on the tradition. The reader must gleam what information he can from this, as it’s likely more explanation was given in the first book of the series.

Kali’s respect and beliefs in the traditions of the Hawaiian people is evident through the story, though she never lets it interfere with her investigation.

The descriptions of the chemicals used on the fields causing sickness among the employees may bring to mind similar real cases recently causing notoriety.

Kali’s clashes with Abraham Waters also reveal that the mind of the zealot can’t be changed, even with reality staring him in the face, and it may very well bring about the death of the one bringing that reality to the surface.

This is Book 2 in the series Dark Paradise Mysteries. Expect the next entry to be as atmospheric and entertaining.