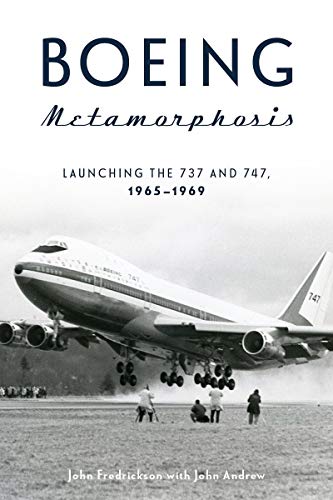 “Together John Fredrickson and John Andrews have put together a fascinating account of Boeing's history with special focus on the dramatic changes necessary to produce the 747.”

Boeing Metamorphosis by John Fredrickson and John Andrew is essentially two books. Fredrickson, who was with Boeing from 1975 until 2011, outlines the company history. Andrew was tasked with building the production facility for 747s. The story of how he accomplished it is fascinating. The building would be, at 205,6000,000 cubic feet, twice the size of the largest building in the world.

Boeing in-house intrigues—and the strategies he used to deal with them—are as compelling as any of the sagas streaming on TV. There is a lot to be said about turning 760 acres of rugged timberland into the site for a ten-story high space expansive enough to contain 300 football fields, goalpost to goalpost. Twenty-six overhead cranes move sections of the planes along 39 miles of ceiling tracks. The project also included building a steep rail spur (5.6% grade) from inside the factory 540 feet down a ravine to connect with the Great Northern railroad system.

The metamorphosis about which they write is Boeing's shift in the 1960s from dependency on military contracts to a self-reliant builder of airliners. Until this shift proved financially successful, those working on military hardware referred to the unprofitable airliner operation as a "hobby shop."

The founder of the company, William E. Boeing, began building aircraft as the result of an accident, the crash of a seaplane he bought from aviation pioneer Glenn L. Martin. Since the parts needed to repair it were not available, Boeing decided to replace it by building a seaplane with his friend, Naval Commander George Conrad Westervelt. Thus, 13 years after the Wright brothers flew their own plane, Boeing piloted an aircraft of his own design on its first flight. Boeing's plane had a remarkable range of 320 miles.

Boeing's consortium came apart in 1934 when Congress separated the manufacture of airframes from the manufacture of engines, and the operation of airlines. While retaining its airframe-building business, Boeing's holding company divested itself of United Airlines and several other companies. Pratt & Whitney, Chance Vought, and Sikorsky became United Aircraft Corporation (later United Technologies) based in Hartford, Connecticut. Boeing, who had prospered during the Depression under the Hoover administration, retired, fed up with the Roosevelt administration.

Boeing turned his attention to raising horses and real estate development that excluded non-Caucasians. The Boeing Airplane Company continued to function under a series of other leaders. A 1935 prototype, the model 299, became the basis for the tremendously important WW II B-17 bomber. A workforce that was 46% female produced as many as 16 B-17s a day.

John Andrew joined Boeing in 1955, an event that took place—as William Boeing's entry into aircraft building did—by accident. At the age of 24, Andrew traveled to Boise, Idaho, with the expectation of being hired by Morrison-Knudsen, the world's largest construction company. He found that hiring in Idaho had been temporarily halted and was told to go to Seattle.

In Seattle, after learning the company's operations in Alaska had been shut down for the winter, he happened to see a sign in downtown Seattle reading "Arcade Building, Boeing Employment." He went in and filled out an application. As he stood in line to present his application, the men in line ahead of him were told there were no openings available today. But unlike the other men in the line, Andrew had an engineering degree. Before the day ended, Andrew found himself with a job he had never envisioned, at a Boeing drafting board. Ten years later he would be in charge of producing the largest factory space in the world.

Together John Fredrickson and John Andrews have put together a fascinating account of Boeing's history with special focus on the dramatic changes necessary to produce the 747.