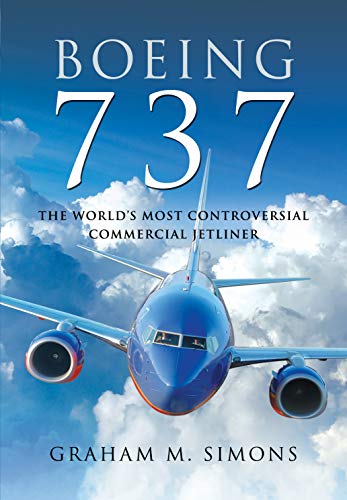 Boeing 737: The World’s Most Controversial Commercial Jetliner is handsomely published on coated paper that allows the amazing number of Boeing 737 photographs to look their best. Graham M. Simons goes into great detail about the aircraft, its design, history, and usage. Astonishingly, the book ends before the story ends. An otherwise comprehensive history of the 737 went to press just as its most important milestone—the MAX returning to service—was about to take place.

It is perplexing that right from the first paragraph the author presents the 737 MAX crashes solely as a design flaw. If the design was flawed, why was there no sign of it in the US, Canada, or Europe? Simons does not mention that problems that led to the Lion Air crash had been repeatedly reported to maintenance. He only obliquely mentions that every Boeing pilot is supposed to memorize the procedure for uncommanded stabilizer trim. But the pilots who crashed did not know the procedure or did not know it well enough to carry it out. A pilot hitching a ride in the jump seat of the plane that crashed the following day had to coach the pilots at the controls through the steps of the procedure they should have memorized.

Simons takes the view that we have entered an era in which we cannot expect pilots to be as capable as in the past, and therefore, a modern airliner should be designed so that intervention by pilots is unnecessary. According to this view, any need for pilot intervention is a design flaw. Since the 737 could not be transformed into a low-quality pilot airliner, Boeing, he suggests, should have abandoned the MAX project in favor of a new easy-to-fly design. He seems to believe the Airbus is such an airliner and quotes Airbus chief engineer Bernard Ziegler as saying the Airbus could be flown by his concierge.

History suggests Ziegler's judgment is not to be trusted. While a fighter pilot in the French Air Force, Ziegler broke every rule in the book by flying into a restricted area and buzzing a ski area where his dad was vacationing. He clipped a cable car line and sent six people plummeting to their death. His folly left 81 others dangling until they could be rescued by mountain guides working through the night. But rather than serving time in prison, Ziegler was soon serving as chief test pilot at Airbus where his father, Henri Ziegler, was CEO.

The Airbus is not a magical plane that does not need pilot intervention. In some cases, it needs more intervention than even a test pilot can muster. The only piloting errors the Airbus fly-by-wire design can prevent are errors no qualified pilot—airline or private— would make. And since the system computers block actions they think are mistakes, the system can cause a crash in a situation the computers have not been programmed for. In an unusual situation, Airbus pilots need to figure out whether the fly-by-wire system is going to do something unexpected. That isn't always possible.

Airbus test pilot Michel Asseline crashed an A320 at the 1988 Mulhouse air show when the fly-by-wire system kept him from applying power. An A330 crashed on a 1994 test flight when attempting to certify takeoff performance following an engine failure. Air France 447 descended into the Atlantic when the pilots at the controls couldn't figure out why it was not maintaining its altitude. An XL Airways test flight crashed after two of the three angle of attack sensors feeding data to the computers failed.

When Sullenberger approached the water in his Airbus, he was unable to outthink the fly-by-wire computers and his plane slammed into the water with three times the force it was designed to handle. The aft fuselage broke open. Frigid water flowed in. Were it not for two pieces of luck, Sullenberger would have been considered a screw-up rather than a hero.

By the luck of the draw, his plane was one of the few the airline had fitted with four slide-rafts, escape slides that doubled as life rafts. Only two slide-rafts could be used. The slide-rafts at the rear doors were under water and inaccessable. Passengers crowded onto the slide-rafts at the front cabin doors. As the cabin filled with frigid water, the remaining passengers were forced to wade out onto the wing of the rapidly sinking plane. Had watercraft not been available to quickly rescue passengers from the wing, only those in the two usable slide-rafts would have survived.

A non fly-by-wire airliner would have fared better. Had Sullenberger been flying a 737, he would have been able to apply his “stick-and-rudder skills” and land in the water without damaging the fuselage. A DC-8 that landed in the water near San Francisco airport floated for days until lifted out of the water by a crane. It was repaired and flew again.

Simons writes, "For about eighty years, Boeing Aircraft functioned as an association of engineers. Its executives held patents, designed wings, spoke the language of aviation engineering and safety as a mother tongue." After Boeing took over McDonnell Douglas in 1997—according to the author—there was " a transition of power from a primarily engineering structure to one of accountancy, numbers-driven powerbase that saw corners cut, and the previously extremely high safety methodology compromised."

That repeatedly stated theme does not hold up to scrutiny. Safety was compromised in the interest of cost-cutting long before Boeing took over McDonnell Douglas. The 1991 crash in Colorado Springs and the 1994 crash in Pittsburgh was the result of Boeing's decision to cut costs by—for the first time—using a single rudder panel controlled by a single rudder actuator. Every other airliner has two independently operated rudder panels so that if one malfunctions, the other can control the plane. Finally, due to F.A.A. demands, Boeing designed a fix so that two independent systems operate the single rudder.

In another early cost-cutting measure (not mentioned by Simons) Boeing used slightly thinner aluminum skin (0.036 inch) on the 737. Testing done on the 0.038 inch skin used on the 727 showed that if damage caused the fuselage skin to peel back during flight, the peeling would stop at the next row of rivets. Instead of testing the 0.036 skin, it was assumed that the slight change would not matter. It did matter. An Aloha Airlines 737 became a convertible when a huge portion of its roof peeled off in 1988. Though Simons holds McDonnell Douglas executives responsible for cost-cutting at Boeing, their company was known for building beefier airplanes. The skin of the Douglas DC-8 and DC-9 is 0.05 inches. And some DC-3s built in the 1930s are still in regular service.

What does this all mean? As a historical record, this a good book. As a book that brings clarity, this book is a dismal failure. For clarity about the MAX, we can turn to a New York Times feature by the well-respected aviation journalist and pilot William Langewiesche titled "What Really Brought Down the Boeing 737 Max?"

In summary, Langewiesche says, "What we had in the two downed airplanes was a textbook failure of airmanship. In broad daylight, these pilots couldn't decipher a variant of a simple runaway trim, and they ended up flying too fast at low altitude, neglecting to throttle back and leading their passengers over an aerodynamic edge into oblivion. They were the deciding factor here—not the MCAS, not the MAX."

Langewiesche goes on to say “Pesident Trump weighed in on the basis of no perceptible knowledge, and the F.A.A. was forced to retreat from its initial defense of the airplane, Boeing had to accept a public onslaught. . . . Boeing has grown largely silent, perhaps as much at the request of its sales forces as of its lawyers. To point fingers at important clients would risk alienating not only those airlines but others who have been conditioned to buy its airplanes, no matter how incompetent their pilots may be."