The Body in the Wake: A Faith Fairchild Mystery 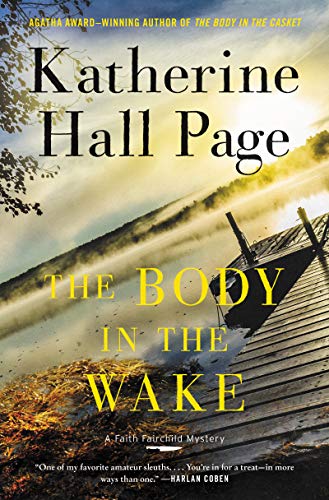 “Page’s humor is delightful, and her descriptions of life on the island bring both the landscape and the characters to life.”

Friends, family, the opioid addiction crisis, the odd murder or two, and a few yummy-sounding recipes blend together by a talented writer into the memorable 25 adventure for Faith Fairchild, everyone’s favorite caterer and amateur sleuth.

It’s high summer on Sanpere Island off the coast of Maine, “the land of boiled dinners and soft bagels,” and Faith Fairchild, minister’s wife, caterer, and amateur sleuth, plans a leisurely vacation visiting her friends on the island with no unwelcome interruptions involving dead bodies and dangerous murderers.

Not that Faith intentionally goes looking for any deceased person whose passing involves knives, guns, or other deadly weapons. She just seems to have a gift for it.

It’s a gift she resolutely hopes won’t ruin her plans. Besides, her minister husband Tom is very much against her involvement in any more amateur sleuthing. Not only is it disruptive, it’s also possibly life-threatening. Murderers do tend to resent anyone trying to ferret out their identities.

Faith is very busy trying to distract her young friend, Sophie Maxwell, from her worries about her fertility—or lack of it. “The big three oh was looming closer and closer, weeks away, and her biological clock was ticking at warp speed.”

There is also good friend, Pix Miller, who is danger of a psychic break, or least a nervous breakdown, while planning daughter Samantha’s wedding later in the summer. When not distracting Sophie, Faith is trying to prevent Pix from nervous fits over the wedding.

Unfortunately, Faith’s plans go awry when she and Sophie go for a swim in a small lake on the island. “She reached the end of the pond and flipped to return . . . Until she saw two bare feet sticking out of a pair of jeans.”

After giving a statement to the police the two friends have a restorative gin and tonic at Faith’s home. Sophie tells Faith that she had seen the victim with three friends at the market the previous week. They were riding motorcycles with Massachusetts plates.

The victim had no identification and no motorcycle. He did, however, have a distinctive tattoo on his arm: “a life-like green adder snaking up his right forearm, its fangs dripping blood and a few Gothic letters . . .”

There are other unwelcome events on the island. The cottage next to Pix has sold to a very unpleasant couple who proceeded to clearing the property of trees and shrubs in violation of local ordinances. The new owners, Cameron and Drew Crane, dismiss Pix’s complaint, with Cameron being especially nasty. “It’s my land and I can do whatever I want with it.”

Sam, Pix’s husband and an attorney, drives up from his office in the city to confront the Cranes. It is a brief conversation and futile. As Pix fixes lunch “Sam expressed his feelings using language never employed in front of the children, even though said children were now adults.”

Upset as she is Pix has other concerns. Samantha’s wedding is as organized as Pix can make it even though she worries about what might go wrong. As well she should be.

Samantha’s future mother-in-law arrives with enough luggage for a large caravan to announce that she has planned the wedding down to the last minute and arranged for a famous designer to make Samantha’s wedding dress. Alexandra Kohn is as close to the mother-in-law from hell as one can imagine, and listens to neither Pix, Samantha, or Zack, her son and the prospective groom.

Faith suggests Pix call Sophie’s mother, Babs, to shut down the mother-in-law. Babs is best described as a force of nature and takes charge of the mother-in-law problem. The two women enroll in a memoir-writing course at a local conference center.

Sophie enrolls in the creative writing course to have something to do besides worrying about not being pregnant and thinking about the dead body she and Faith found.

Meanwhile the Cranes press charges against Pix and Sam for destroying property, namely his chain saw. The situation escalates when the Cranes’ shed burns down. Again Cameron Crane blames Pix and Sam.

More complications occur when the chef at the conference center has an apparent heart attack, leaving Amy, Faith’s daughter, in charge of the kitchen. Reluctantly Faith agrees to help, negotiating a high salary for herself and a raise for Amy.

Intermittent chapters chronicle a young mother addicted to opioids, obviously a friend to Faith, Pix, and Samantha—all of whom are unaware of her problem.

Katherine Hall Page juggles all the various plot elements in this traditional mystery like the skilled writer she is: the wedding, the problem with the Cranes, the mother-in-law from hell, and the matter of the murder.

Page’s humor is delightful, and her descriptions of life on the island bring both the landscape and the characters to life.

To one who is not familiar with the Faith Fairchild series may find to keep track of all the many characters. Sometimes the book seems to have a cast of thousands, but each is likeable, so the effort to sort them all out is worth it.

Altogether The Body in the Wake is easy reading, and the recipes in the back of the book are an added bonus for those who like to cook or just like reading about food. Recommended for the fans of traditional mysteries.