The Body Scout: A Novel 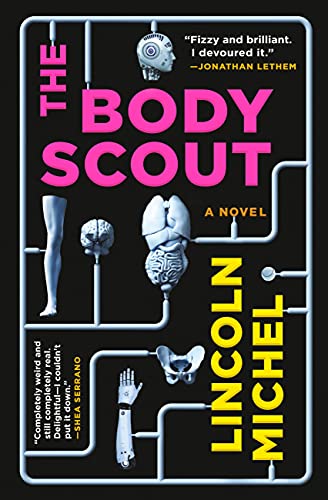 “an amusing, well-written cyberpunk thriller that is paced finely enough to keep the reader turning the pages.”

The future is dominated by corporations, biotech and pharmaceutical giants who have their fingers in every pie imaginable, including professional sports. Monsanto Mets, Pyramid Sphinxes, etc. The players are augmented, athletes with enough chemical upgrades that one can’t really define them as human anymore. It’s a world of the ultra-rich and the ultra-poor, with the few caught in between, numbed by chemical cigarettes called erasers.

Kobo is a scout for the Mets, a cyborg (called an “oiler”) indebted up to his bionic eye in medical debt, a former baseball star gone to seed. The only thing keeping him going is the thought of his best friend/foster brother JJ Zunz who is a superstar at the peak of his career as the Mets’ number one player. That is until Kobo watches him literally die at home plate as he steps up to bat.

Murder? Corporate espionage? An upgrade gone wrong? Whatever it is, Kobo must find out why his brother, the man he’s looked up to his entire life, mysteriously died, and the Mets aren’t being cooperative.

Pursued by a duo of enhanced sisters who want to collect what Kobo owes to the medical corporation responsible for his cybernetic upgrades, he must delve back into a world he left in his rear view long ago. On the way he encounters Neanderthals (resurrected from extinction in true Jurassic Park fashion), an old flame, and a mysterious young girl who always seems to be where she’s not supposed to.

This is a murder mystery in true Robert B. Parker style given a cyberpunk uplift, or upgrade . . . pun intended. It has the brooding, emotionally damaged sleuth, an inexplicable death, hordes of wry humor barbs, and plenty of action. It also reads bit like a treatise on what to expect in a world where corporations have no political or legal boundaries. Much like Fight Club it bludgeons the reader with a satirical look at consumerism, although using body modification to drive the point home.

Dry, wry, and sometimes having tongue firmly planted in cheek, The Body Scout is an amusing, well-written cyberpunk thriller that is paced finely enough to keep the reader turning the pages. Although the big reveal at the end doesn’t shock or surprise, there is enough build up to make reading worthwhile; and while lacking a bit in the Mike Hammer sleuth department (Kobo rather stumbles his way through the story thanks more to blind luck rather than skill), it is still fun.

Sure, there are shortcomings, as most books have a few, but The Body Scout does deliver when it comes entertaining the reader with a bold look at a corrupt, futuristic world far too similar to our own.