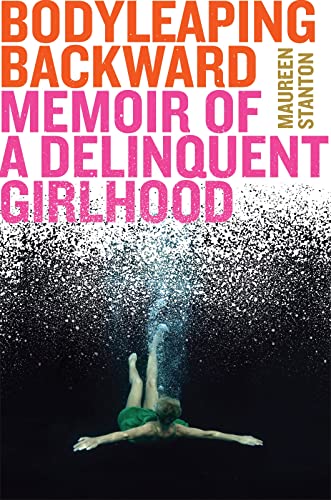 Many young teens turn rebellious as they grow up. They're trying to gain their own individuality to become independent, and many times they do this by bucking the system. This is the situation Maureen Stanton faced. Born in 1960 and one of seven siblings, she and her family lived in Walpole, Massachusetts, a small town south of Boston known for its maximum security prison.

Every time they drove by the facility, Maureen's mom would comment that unless the children behaved themselves, they would end up sequestered behind the high concrete walls topped with barbed wire. Maybe she thought this would keep them in line.

For some reason, the prison fascinated Maureen. "The prison reminded me of the castle we visited in France, in the Loire Valley, where we lived for two years when my father worked on computer systems for the military . . . "

At that castle is where they got lost and locked in a room until a guard discovered and freed them after an half an hour.

". . . For years after I had dreams of wandering in the castle, the damp stone walls, those tall wooden doors. When my mother said, 'If you're not good, I'll put you in Walpole Prison,' I envisioned the castle in France."

Maureen displayed ambivalence toward her deeply religious, Catholic mother. Too young to understand the tenets of the religion, Maureen questioned going to confession. "I realized that no one checked whether you said the prayers, or said them right. The church used the honor system. Why did the priest trust someone he knew to be a sinner, someone who regularly—every Saturday!—arrived with a fresh litany of sins? Did he really think this person, this incorrigible recidivist person, was to be trusted carrying out her own penance? I must not have believed in God, or else I'd have worried that He was watching. Could I have been agnostic at the age of seven, eight? Instead of repenting, I kneeled at the altar for a certain amount of time, studying the intricate frescoes, Jesus on the cross, nails pounded into his living flesh, the ignominy of hanging alongside two thieves, his slow, agonizing, cotton-mouthed miserable death."

When Maureen turned 12 and her parents separated, things fell apart. Not long after, her mom, a strong proponent of the Ten Commandments began shoplifting. Could she be doing this due to lack of money? Maureen, embarrassed by her mom's actions saw this as a case of "do as I say, not as I do," and she, too, took up the act.

In 1975, at age 15, Maureen developed a sudden overwhelming depression. She cried constantly without understanding why. Two visits to a psychiatrist did not help so she refused to return. Before long, Maureen became incorrigible.  Stealing from local stores, as well as drinking, she smoked marijuana and other drugs then escalated to angel dust on a daily basis. She tried any and all substances, and one can wonder, did she hope to self medicate the depression, use this as retribution for her parents' split and the fact that her overworked and overstressed mother did not have time for her, or was this "normal" teenage angst and hormones? Where she had once been a superior student and quite popular, Maureen's world spun out of control.

The friends she associated with yearned for "thrills" no matter how dangerous or illegal their actions. Though Maureen did not actually commit a crime, being in the presence of those who had, made her liable. Hardly ever home, she stayed out most nights, and when her mom was away for the weekend, her home became party central where it often got trashed by other teenagers out of control.

"I didn't see my family as broken, but it was true. Broken was the perfect word to describe what happened to my family when my parents separated; we splintered like a mirror dropped to the floor, the whole broken into individual units."
Maureen's recklessness began at a young age, especially her mother's threats of being incarcerated for wrongdoing. Did the prison, along with Norfolk, a minimum-security penitentiary in the next town, Pondville, a state-run cancer hospital, and Wrentham and Medfield State Mental Hospitals in close proximity to her home incite Maureen's imagination?

This was the era of the assassinations of President Kennedy, Martin Luther King Jr., and Bobby Kennedy, the upsurge in Vietnam, Nixon's war on drugs, hippies, bra burnings, protests, and free love. It's no wonder some of the younger generation went to the extremes. Morals and norms were shifting quickly, and the country was in chaos.

Walpole, MA, and the surrounding areas are very aptly described during that time, and the emotions, not just that the teens experienced, but also Maureen's parents demonstrate how difficult times and circumstances were.

Maureen states: "Sometimes I wonder how I survived those high school years, how I wasn't maimed or killed the hundreds of time I got into car with people so fucked up they could barely stay in the lane, or by getting behind the wheel of a car myself after drinking, smoking pot or angel dust, taking speed or acid. Worse, I might have hurt or killed someone else. I could have been raped by strangers with whom I hitched a ride, or by boys on whose couches or in whole cars I passed out."

One can only empathize with young Maureen, and it would be no surprise if many of her contemporaries suffered the same disillusion as she. To open up and share her story with others must have been difficult, but also cathartic for her with the hope it helps other youngsters who feel alone and disenchanted with their lives.