The Body in the Castle Well: A Bruno, Chief of Police Novel 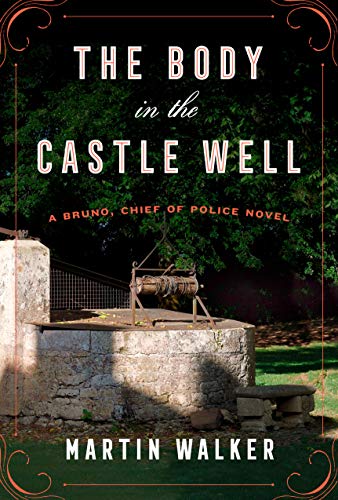 “Brushes aside the extraneous and immediately takes the reader into the investigation and the array of characters and motives with no wasted verbiage.”

St. Denis police chief Bruno’s morning routine is interrupted by a call from his friend Florence who is worried about a friend. The night before, Claudia, an American student from Yale working on her doctorate in art history, left a lecture she and Florence attended after becoming ill. “I’m worried about Claudia. Her landlady says she never came home.”

Florence wants Bruno to find the girl and makes certain she’s all right.

Unfortunately, Claudia isn’t; at the castle in Limeuil where the lecture was held is a well, currently being repaired. The enclosure to the well is uncovered, and Claudia’s body is found floating inside.

The initial conclusion is that she took some medication for her illness, became dizzy, and fell into the well and drowned.

“She had fentanyl and oxycodone in her room, prescribed by an American doctor. She tried to get more here but the doctor refused, saying it was too dangerous.”

Soon, however, this proves not to be the case.

With an American dying in a foreign country, the case has international repercussions. Claudia’s father is an influential man, well-known in political circles. He demands a full investigation, and soon, various members of the US diplomatic core as well as the dead girl’s mother descend on the little French town.

Various people become suspects. Claudia’s friendship with Laurent, a man just released from prison, is blown out of proportion. Her obsession with the possible forging of proof of provenance of various art treasures, discovered during her studies by a well-known and beloved war hero and art dealer, is brought to light.

“She told me she was concerned he might have been profiting from attributions he made on what she thought were suspect paintings.”

Could either man have reason to kill the girl? Claudia was definitely drugged. Is addiction and a drug dealer involved?

Bruno thinks not, but occasionally he has been wrong in his assumptions. In one instance, he may be wrong, in another, perhaps not. Then again, Claudia’s death may have been simply a cold-blooded method of covering up another, more selfish crime.

“You have waited in more dangerous moments, more dangerous places, stood in the shadows with the lives of other men under your orders and depending on your judgment. If you’re wrong, the only price you pay this time will be a little humiliation. It might be good for you.”

Some authors take their time in setting up the crime, lovingly describing step by step as it takes place; others leap right in, beginning their stories with its commission. Walker does them one better. He’s so eager to embroil the reader in the story that he has the crime committed before the story begins, and by the third paragraph of page one, the reader is plunged directly into the investigation.

Though the title tells of the crime, the method by which it is perpetrated is not only coldblooded but devious in conception. Not that this is a bad thing, for it brushes aside the extraneous and immediately takes the reader into the investigation and the array of characters and motives with no wasted verbiage.

Played against the backdrop of a celebration of the life of Josephine Baker, American ex patriate, entertainer and French resistance agent, the usual delightful coterie of Bruno’s colleagues are again present, offering assistance in solving the crime as well as in preparing and eating the usual delightful recipes featured throughout the story.

There’s more revelation of Bruno’s personal life in this one. Now involved with Pamela, owner of the riding stable where he keeps Hector his horse, the police chief is still pining for the ambitious Isabelle who left St. Denis for Paris. Though she’s told him they should break it off, freeing Bruno to find someone to marry, she’s confident he won’t, and when he proves her correct, he finds himself pushed by the intervention of a well-meaning friend toward an inevitable decision.

Bruno himself recognizes what’s coming as he listens to the opening bars of “J’ai Deux Amours”:

“I also have two loves but I wish I felt half as happy about them as Amelie does while singing that iconic song.”

It would appear more interesting times and crimes are coming and readers will wait with anticipation to see what the next Bruno, Chief of Police novel holds.