The Body Artist: A Novel 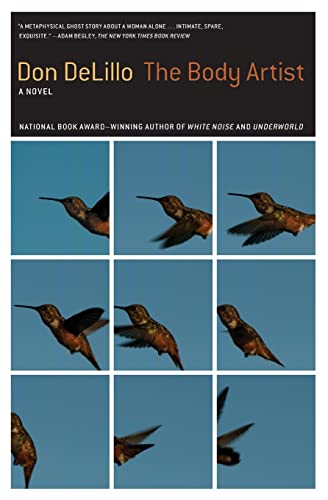 Don DeLillo is a writer of contrasts, and none more so than the contrast between his sprawling, bestselling, summer-long-read Underworld and the lean skeleton-of-a-book, which is The Body Artist. Only 124 pages long, this enigmatic little novel of three isolated characters couldn’t be further from the 827 page, cast-of-thousands “Underworld.” Its meditative style and delicate suspended prose offer the reader a strange perception of relationship and contemporaneity.

The story begins with Lauren Hartke having breakfast with her husband, Rey Robles. They’re staying in a remote rented house, somewhere on the New York coast. Lauren is the thirty-six-year-old Body Artist of the title—not a tattooist or a portrait painter, but a woman who uses her own body to perform conceptual performance art pieces, in which she systematically transforms her shape onstage. Rey is a restless, thrice married, sixty-four-year-old movie director, and they seem to be secluded from the chaos of the outside world, echoes of which only reach them through the newspaper and radio.

The minutely obsessive descriptiveness of the opening chapter, the extreme slow-motionness of it, is suggestive of an altered state, similar to Huxley’s in The Doors of Perception. Sentences trail off abruptly, without an ending and thoughts hang in mid-air. The excruciating dialogue resonates like a mantra and the essential smell of soya permeates the scene —until Rey looks for his car keys.

Then, suddenly, we’re reading Rey’s obituary. We learn that he shot himself in his first wife’s apartment in Manhattan. A brief biography tells us he was a self-made man, working his way through jobs as a trash-man, a street juggler, a chauffeur, and a movie extra, before getting a directing break through the wife of a millionaire industrialist, with whom he was having an affair. He achieved fame for a time, before his eventual decline into alcoholism and depression.

After Rey’s suicide, Lauren returns to the old, ramshackle house alone. She falls into a routine of “meals, tasks, errands” and organizing time “until she could live again.” She resumes her regimen of stretch and contortion and spends hours staring at a 24-hour computer video-feed from a web-cam on the edge of a bleak, two-lane road outside the town of Kotka, in Finland. Then, after hearing a noise, she discovers the manifestation of an eerie young man, sitting on the edge of a bed on the third floor of the house in his underwear. He’s small and fine-boned and looks at first sight like a kid.

Lauren is strangely unafraid of this apparition and she tries to find out who he is, with obscure responses coming from the stranger, who she christens Mr. Tuttle, after a high-school teacher. She knows she will have to call hospitals, clinics and psychiatric facilities, but she never does. Mr. Tuttle can speak with Lauren’s voice, and also with Rey’s. He repeats snatches of conversation she’s previously had with Rey and seems to know things from the past and the future. This is theoretical physics per se, and has its reference in the omnipresence of time, where everything—past, present and future—exists concurrently and can be tapped into, without necessary sequence or linear context.

Lauren continues to work her body hard, “there were always states to reach that surpassed previous extremes,” in an attempt to become the impossible, the essence of life, the bodiless form of existence that is only found outside the existence of the body—invisible—unidentifiable. While the stranger exists only in relation to references of herself and Rey and, in him, time as we know it becomes irrelevant. Then the stranger disappears, just as suddenly as he appeared.

We next meet Lauren in a Massachusetts café, talking about a recent performance of her body-art, in which she became, briefly, something other than herself onstage, in which she became Mr. Tuttle, while striving for the nihilism of Beckett’s Malone. This is something akin to the omnipresence of a religious doctrine, the everybody of everybody—the everybody is everybody—the oneness of all things. In the end, Lauren thinks for a moment that she might be able to take the keys from Rey’s car before he leaves on his fateful journey. But she clings to a sense of what’s human and realizes that, even if this were possible, it would be humanly futile.

The Body Artist is for readers who want their minds to be stretched, just as Lauren stretches her body—beyond recognition. We are forced to look at our own versions of reality from a new and unprotected emotional perspective. The book doesn’t easily give up its inscrutable secrets and each reader will inevitably leave with their own individual conclusions—or maybe not. DeLillo himself asks the question on the antepenultimate page, “Is reality too powerful for you?”—then he advises us to “take the risk.”