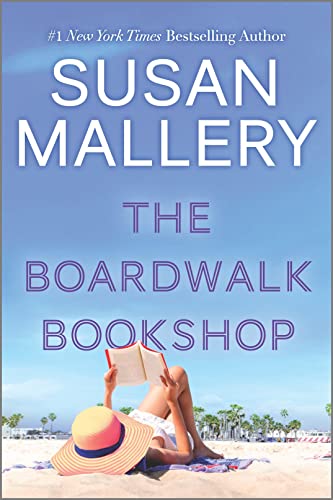 What could be more fun and exciting than being single and having a thriving business located right on the California waterfront? Bree Larton, the only child of two famous literary novelists, has been running Driftway Books three blocks inland when she comes upon a building for rent on the beach. She dreams of moving her shop there, but it would never happen with the exorbitant fee and space much larger than she needs. As luck would have it, she meets two women looking to open their own businesses as well, so they take a leap of faith and sign a ten-year lease while combining three shops in one.

The youngest of the trio, Ashley Burton, owns Muffins to the Max. Mikki Bartholomew, who is nearing the age of 40, opens The Gift Shop, which is targeted toward tourists, and Bree changes her store's name to The Boardwalk Bookshop. Six months into their partnership, all three businesses are thriving. The women have become friends and have started a ritual where every Friday night, after closing, they head to the shore with a bottle of champagne and unwind.

Bree is very reserved, mostly stays by herself, and never shares her life history. She was raised in a dysfunctional family where affection was not offered and had been married to a man who didn't love her, so she trusts no one and prefers a solitary existence.

Ashley lives with her boyfriend, Seth, and the two seem to be perfect together, yet Ashley wonders when Seth will pop the question. After all, doesn't every woman want the wedding, the house with the picket fence, two children, and a dog?

Mikki is three years into her divorce from her ex-husband, Perry. They have a daughter in college and a son in his last year of high school. Since she's been single, Mikki has not dated or tried to meet other men. Is she hoping for a reconciliation with Perry, with whom they have a friendly relationship?

As time passes, the women open up to each other, yet Bree does not share anything about her past. She has a high wall surrounding her that is almost impossible to break down. From the hurt and neglect by her uncaring parents and her now-deceased husband, her vulnerability makes her keep everything inside.

Then Bree meets Ashley's brother, Harding. He is a bestselling author who was hit by a car and left on the side of the road to die when he was young. It was supposed he would not survive, or if he did, would never walk again, but he surprised everyone with his determination and tenacity to live. Though Bree has no interest in any guy, Ashley warns her not to become involved with Harding. She says Bree is just the type Harding goes for, and Ashley knows Bree would end up chewing him up and spitting him out, so her main concern is keeping her brother from getting hurt.

Harding falls hard for Bree, and surprisingly, she is enchanted by him, yet fear rules her heart. How can she trust him when she doesn't trust anyone? She acts cool and aloof, not disclosing she is the daughter of celebrities and will not sell literary books in her shop, showing her indifference toward her parents. She has no contact with them until one day, she receives a phone call from Idalina, her mother's publicist, requesting Bree host a signing for her mother Naomi. When her mom arrives at the store, Bree escorts her to her office to stay until the event begins:

"She walked her mother to the office. It was only after her mother had taken a seat by the desk that Bree realized Idalina hadn't come with them. Which meant conversation would be required. . . .

. . . "She hadn't seen her mother since Lewis had died. They rarely spoke, so it was reasonable to assume after all this time, there would be much to say. Only there wasn't. Naomi had no interest in her life, and the opposite was also true. Excluding their biological connection, they were strangers forced together for a few hours.

"She remembered when she was younger how she'd wanted to talk to her mother. She would come up with what she hoped were interesting topics they could discuss. Sometimes she did research or made notes, but while her mother would occasionally engage on the subject, her interest was fleeting. After a few minutes, she would need to get back to work, and Bree would be alone again. Until boarding school, her world had been small and lonely."

Bree's business partners care for her and try to break her from her shell. When Harding confesses his love to her, this scares her away, for there is no way she would commit to anyone. She cannot take the pain of another rejection and insists she is no good for him. But is she right? She falls for Harding, but her pride and stubbornness will not allow her to take a chance with him.

Soon the women get to know each other better and open up to share their secrets while offering advice. A true lesson in friendship without judgment is the main focus, for they realize everyone has issues and faults, and their goal is to help.

Susan Mallery gets to the heart of women's emotions, touching on the closeness of friends and the problems they face. However, it is unnerving how some can be naïve, foolish, and obstinate about their beliefs and feelings. Specific situations tend to be redundant, slowing the flow to where the reader would want to scream and say, "enough, already!" In addition to exploring the female psyche and highlighting how these three women bond, The Boardwalk Bookshop offers sensuality and steamy sections in this lengthy beach read.