Bluegrass Baseball: A Year in the Minor League Life 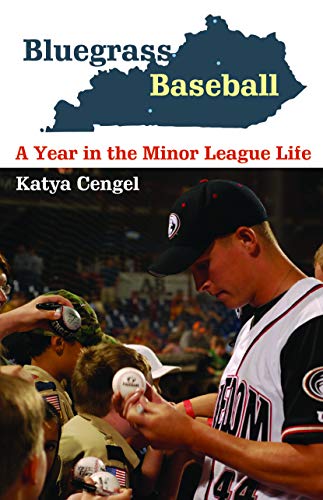 “Bluegrass Baseball performs a reality check for prospective players and owners in the minor leagues.”

Books about life in the minor leagues of professional baseball usually focus on the experience of one player and his success in moving up to the major leagues or his failure to make it there.

Bluegrass Baseball provides a portrait of four Kentucky clubs, along with their players, during one season in their baseball experience.

Author Katya Cengel reveals what it takes to form and run such a club as well as to be a player for this kind of organization. What it takes is great determination.

Baseball in the minor leagues is a precarious business. Author Cengel makes clear that creating a minor league club requires people who have close contacts in the community and can call in favors in order to get the support needed. Those who run the club must also wear many hats, work on many different levels, and stay on the job almost constantly, like those who run mom-and-pop retail stores.

Wives of these managers, unless they also work for the clubs, seldom see their husbands, since they may work seventy to 80 hours a week.

Moreover, owners must constantly think up new promotions to call attention to the club. The sillier they are, the more media attention these stunts receive. Media attention translates to more fans sitting on seats in the park.

Fans of minor-league teams seldom care who wins a particular game. What interests them is a family fun experience. They enjoy, for example, seeing the club owner make a fool of himself.

Minor-league owners and general managers are the spiritual descendants of Bill Veeck, who in the 1940s annoyed other big-league club owners with his nutty promotions. They should see what goes on now in minor-league parks, like owners eating cat food as part of a bet and mascots with huge false heads harassing fans.

The players’ lives are often hectic, too, for different reasons. Living conditions for minor-league players, especially those who are new and just trying to make it at a minor-league level, are less than comfortable. Groups of young fellows from the Caribbean are often jammed into rented apartments furnished only with mattresses, orange crates, a folding table, and their personal cell phones. They need help doing everything because they cannot speak English. Since they seldom have access to a car, they have trouble getting food; not much is provided them in the locker room. They skimp on shopping anyway, since their daily food allowance is so low.

These young men leave school early to sign up for a baseball academy, where they might spend two years. Once they receive a signing bonus and travel to the United States to play with a low-level minor-league team, they live in fear that they will be released. They know nothing but how to play ball, and if that is taken from them, they are lost.

Players who have been with the club the year before are either on their way up or their way down, usually the latter. They and their families are constantly worried about having being traded away to another team, or another league, or out of baseball entirely. They push themselves to succeed, often incurring injuries that sideline them. Minor-league clubs lack the funds for carrying injured players for long periods.

It’s an unpredictable life, especially for those with limited talent, who realize that they may never fulfill their dream of making it to the big leagues. They disappoint their parents, their wives, their children, and themselves. Some of them realize that they must prepare to do something else with their lives; they attend college or try to prepare for another baseball job like scouting.

Ms. Cengel opens with a portrayal of the Lexington Legends, whose colorful president will seemingly do anything to promote his team. Her story about the Louisville Bats features a player who seldom stays in one city for more than a month and knows how hard this shuttling around is on his marriage. Besides a mixture of players going up or going down, this team features one pitching star, a Cuban defector, whose high-quality performance stuns the opposition. But he knows only pitching and nothing else about the game. He has to be taught everything he needs to know as a ball player.

The third team described in Ms. Cengel’s book, the Bowling Green Hot Rods, moved from Columbus, Georgia, because Bowling Green offered a new ballpark and other enticements. Because this small city has never had professional ball before, its presence requires constant promotion.

That means thinking of 70 different gimmicks, one for each home game. Because so many gimmicks are needed, “cheesy and dated” promotions are included.

Even an independent team, the Florence Freedom, rates a description in this book. Florence is unaffiliated with a major-league team, so players have even less chance to make the majors than do the players of the other Kentucky clubs.

On a team like this, says Ms. Cengel, “humility is the rule.” Well put. This is where players learn they aren’t quite good enough for high-level baseball. But as the club’s owner points out, it’s also where young men who has some talent and who have “stumbled along the way for some reason” are given a “second chance.”

In Florence, the expense of carrying players is so much of a burden on the club that local citizens are solicited to provide homes for them during the season. These host families house and feed players for free.

The downside of this program is that the families get attached to their players, and most of the time they get traded away during the season. Florence is a southern town, but Ms. Cengel never mentions possible problems of placing black players with white families. Perhaps these hosts are more up-to-date and sophisticated than many southerners.

All the players on these teams suffer from too much wearing bus travel, tedium, and low pay, which, as Ms. Cengel puts it, “make for an exhausting existence.”

The owners and promoters appear to lead hectic lives. After reading of the great effort required to create fans and promote baseball in these minor-league parks, a reader might begin to wonder if it’s worth that much of a struggle, particularly since the business is hardly a financial goldmine.

Some people love baseball so much that they inspire others to help out, and that seems to be what carries the clubs along, despite the many difficulties in keeping it going.

A reader might also wonder why all this effort can’t be poured instead into the promotion of amateur baseball, where it would improve the lives—the health and the enjoyment—of a lot more people instead of the relatively few who are convinced they have special talent.

So many young men believe (incorrectly, it seems) that they are skilled enough baseball players to make the major leagues that people who want to make a business out of the national game put themselves through a lot of stress in order to promote minor-league baseball. Is it worth it, for the promoters as well as the players? To them it is. To readers of this book, the question might inspire a negative answer.

Ms. Cengel covers her subject well, especially in her descriptions of individual owners and players. If she had failed in Bluegrass Baseball to include the sizable down side of owning a minor-league club or playing minor-league baseball, she would have done a disservice to her readers.

Bluegrass Baseball performs a reality check for prospective players and owners in the minor leagues.