The Blue Touch Paper: A Memoir 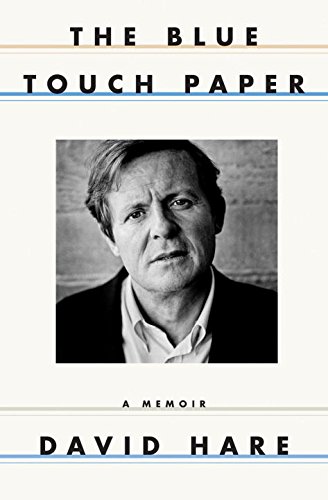 It’s a theatrical occasion when a celebrated playwright gets around to publishing his memoirs and reveals how a play is born. The creative circumstance moves beyond the expected backstage lore of the commercial theater. Playwright David Hare does a measure of that in his just released memoir The Blue Touch Paper, a phrase that means to willfully incite controversy, as he recounts his halcyon days as a nonconformist in the starchy British theater of the 60s and 70s.

Hare is among the vanguard British dramatists that brought a visceral and incendiary naturalism to the West End in Plenty, Pravda, Slag, and Faschen among his many other celebrated plays. He also became a successful screenwriter (The Hours, The Reader), director of the National Theatre, and in 1998 was knighted for his achievements.

He started his theatrical life on a lark with friends, after a lonely upbringing in a provincial British town. Hare's portrait of himself as a quiet rebel in the repressive 50s is first-rate. He recounts his complex and distant relationship with his parents, a long suffering, but loving mother and a merchant seaman father who was away most of the year. His school life was similarly depressing, and delves into the disturbing frequency with which he and his friends fended off pedophiles.

At Cambridge, Hare was rebellious and he started his theatrical career most improbably, almost on a whim in the 60s. He co-founded of the Portable Theatre Company, a renegade troupe that defied all of the bloated West End conventions and was committed to creating one dicey production after another on the road.  The concept of rag-tag theatricals motoring around to bringing avant garde gained quick traction in the counterculture trends of the 60s.

Hare started writing and directing also and had a storybook backstage romance with reporter and BBC producer Margaret Matheson. They married just as both of their careers were taking off and had three children in their years together.

Meanwhile, Hare’s play Knuckle turned out to be his breakthrough hit. The play was a thriller that framed top to bottom corruption in the British government and society. The play was ravaged by most critics in the commercial theater, but championed by his new agent Peggy Ramsey, who represented Joe Orton.

Hare fled the disastrous West End opening night, and Ramsey wrote him “the attack you make is total. Then you disappear to Nottingham . . . David, you have to face the firing squad if you want to change the world.” And Hare did face that theatrical world and in the process Knuckle became a huge hit.

But Hare’s marriage was falling apart; he confessed to Margaret that he was having an affair. The couple separated after Hare fell in love with Kate Nelligan, who was starring in Knuckle and other Hare productions.

By the late 60s, Hare was making huge inroads in the legitimate theater of the time as a writer and director. He was accused of selling out by collaborating with the National Theater, but made the case that what better way to artistically reshape, if not subvert a staid institution that from the onside.

By the mid 70s he had three hit plays running: Slag, a satire; Teeth and Smiles, about a female rock star played by Helen Mirren; and the socialist drama Fraschen, about the Mao revolution, which resonated as England careened toward the economic skids. In the mid-70s, Hare co-founded the Joint Stock Theatre, another unconventional troupe. His hit plays Plenty and A Map of the World were both produced at the National Theater, and he became the Associate Director of the National  in 1984.

This is all fodder for a great theatrical memoir in which Hare, admirably, downplays his achievements. It is refreshingly non-dramatic; however, Hare’s laconic anecdotes can often be meandering and he name-drops quite a bit. The rhythm of the book suffers.

The Blue Touch Paper is recommended for those who are familiar with Hare’s oeuvre and the theater of that era. His views on theory and practice of the theatrical arts, the stuff dreams are made of in a thriving living theater resonate and comprise the guts of his memoir.