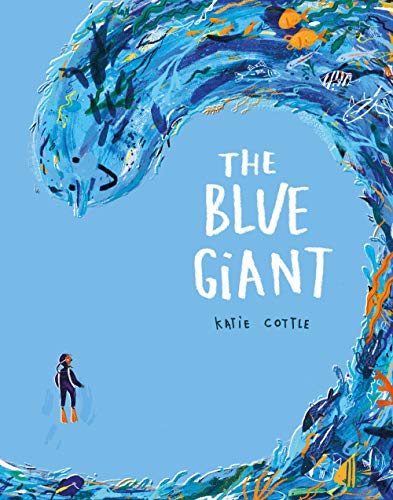 The Blue Giant by author-illustrator Katie Cottle joins a wave of recent titles—such as The Mess That We Made, We Are the Water Protectors, Save The Ocean, What A Waste—to address the enormous problem of ocean pollution. As the story opens, Meera and her mom are going to the beach to relax and spend some time on their boat. The unsuspecting mother and daughter are then greeted by, more like quite surprised, by a tsunami-sized anthropomorphized giant blue wave with a plea, “I have a message from the ocean. We really need your help!”

Cottle does not hold back that this is a book about the garbage that is all around in the sea.  “It’s a huge problem.” So off they go, Meera and her mom, in their boat and into the ocean to start a clean-up effort, “helping each creature one by one.” The impact on marine life of such man-made destruction is boldly illustrated against backgrounds of blue, perhaps in an effort to show how important it is to try and keep the blue sea blue.

The pair find out quickly, “There is a lot more work to do. It won’t be easy and it’s too much for two people.” In a display of environmental stewardship and what teams of friends can do, they show that it takes everybody’s help to turn this big problem around. Inspiring and optimistic, the story concludes that “even the biggest messes can be fixed!” Indeed, Cottle’s on-the-nose message is that humankind made the mess of dumping plastics and other waste into the oceans and now we must fix it.

The Blue Giant is Cottle’s follow-up to her debut picture book The Green Giant; both are a call to action: to show environmental concern and save the planet from human abuse. She does so by telling a simple, yet unapologetic, story with a message as big as the problem itself: Everybody must do their part to end such shameful human behavior. While this message is, of course, important, it does leave out how all of this became a problem in the first place.

Cottle ends her story of being kind to the planet with backmatter suggestions of how we can reduce the use of single-use plastics (e.g., take a canvas bag to the store; carry reusable water bottles). Just like the plea to Meera and her mother, The Blue Giant enlists the reader to take heed of a giant problem and asks for a giant response in return: Let’s keep green green and blue blue.