The Blue Age: How the US Navy Created Global Prosperity—And Why We're in Danger of Losing It 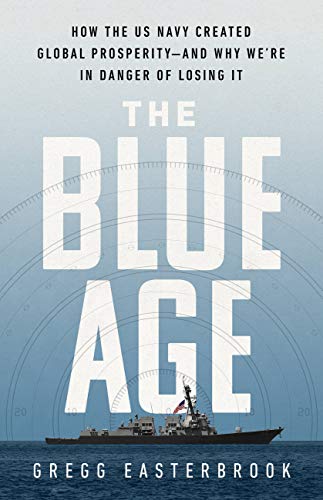 For the last 80 years, global commerce on the oceans has been conducted in a mostly peaceful manner protected by the mantel of the United States Navy. As the author of this volume outlines, this protection has benefited all nations, not merely the US, but is now threatened by rising naval competition among the world’s regional powers, the economic and security challenges posed by climate change, and the global governance structure coming to terms with a rising and increasingly assertive China.

The author begins with a naval history lesson highlighting the evolution of naval power and the sometimes benign, sometimes dangerous influence of naval power on the world order, in particular using the naval race in the years prior to World War I as an example of how the fear of losing naval superiority contributed to German-British tensions prior to 1914. Attempting to meld this with a lesson on current American naval prowess, the author tries to build a sometimes contradictory case that naval power can be useful for world peace and commerce, yet at the same time, the expense of building and maintaining a fleet of warships can be a drain on a nation’s economic growth.

Returning again to the lessons from World War I, he highlights that the entire German High Seas Fleet experienced its only major naval battle at Jutland in 1916, merely to be almost completely scuttled in Scapa Flow, Scotland to prevent its seizure as war prizes under the Versailles Treaty of 1919.

Turning to the major centers of naval competition in the world today, the author examines not only the usual zones of the East and South China Seas and the Arctic Regions, but the Indian Ocean region as a whole, noting that India is also a rising naval power in the region and has its own territorial issues with China that could lead to naval confrontation in the near future.

Throughout his analysis of the shifting balance of power in the Indo-Pacific region, the author takes a rather benign view of China’s rising naval power, almost naively assuming that China will simply fit into the current international rules-based system instead of continuing its current aggressive stance of either attempting to bend international treaties to serve its own purpose or, when international institutions rule against them, simply ignoring them.

Observing the rise and patterns of global trade via the rise of containerized shipping and more automated ports, the author makes the argument that greater efficiencies of modern container ships has allowed countries such as India, China, Vietnam, and others to increase their economic output and lift millions out of poverty, but he also makes two assumptions that have not completely played out as liberal globalists assumed.

First, increased trade and economic liberalization has not been universally followed by global political liberalization and the recent trends out of China in particular show that Chairman Xi is decreasing, not increasing economic and political freedom. Second, the global pandemic and its effects on international trade have shown the fragility of global supply chains that can be significantly disrupted by the same interconnectedness that make them possible. The recent situation of a stuck container ship in the Suez Canal truly shows how a simple bottleneck at one on the numerous maritime chokepoints can have global impacts.

The author concludes with a call for another international organization to police the world’s oceans to fight climate change and offer a more consistent means of resolving the disputed claims of Economic Exclusion Zones and the attendant competition for carbon resources and fisheries that are critical to the economies of developing countries, and which will provide some the major political flash points of the 21st century. The idea may seem sound, but like many other global institutions, it may have difficulty actually resolving major issues in the South and East China Seas.

Overall, the volume makes some interesting arguments about the strategic and often forgotten role navies play in protecting freedom of the seas, but the author’s political asides and overly optimistic view of China often obscure his more useful points.