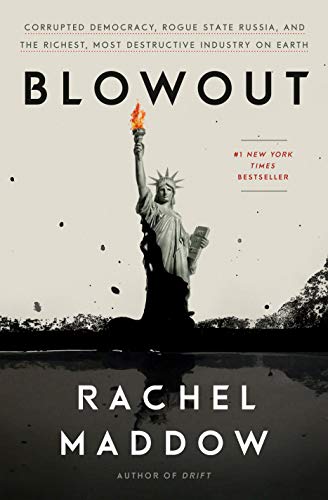 “This is not a feel-good but a get-mad book.”

This is not a feel-good but a get-mad book. Its subtitle reveals the book’s scope and its thesis: the oil and gas industry has corrupted American democracy and financed rogue state Russia. The industry has also managed to stunt developing countries on almost every continent and prop up authoritarian thieves and killers from the Obiang dynasty in Equatorial Guinea to Vladimir Putin’s regime.

The industry has fouled oceans, gulfs, lakes, rivers and streams; induced man-made earthquakes; strewn radioactive waste about the landscape; killed off family pets and farm animals, sickened schoolchildren; and turned state governments into impotent little quislings that rip off their own people to make sure the industry gets everything it wants and more.

Surpassing all this, the industry is the chief driver of the global climate catastrophe. It has funded a decades-long campaign of denial that ensures the climate problem will get worse and that potential solutions are seen as political and economically impossible.

Maddow’s investigations get us below the surface. Does she exaggerate? Not much, if at all. The New York Times on September 24, 2019, reported analyses by thinktank Carbon Tracker and the  Carbon Disclosure Project showing that, despite their ostensible but newfound devotion to clean energy, the major oil and gas producers are rapidly increasing their investment in shale, deep water, and Arctic destruction, while devoting less then 2 percent of investment funds to renewable projects—giant Exxon Mobile, less than one-fifth of one percent!

Maddow shows us how the personalities and plots that have impoverished many have raised raising Rex Tillerson and other fossil fuelers to the top 1 percent and beyond. Her accusations directed at the top echelons of the industry by Greta Thunberg  and other critics are well founded. As she puts it, the fossil fuel industry is destroying human lives and entire ecosystems even as it promulgates “fairy tales of economic growth.”

The author is known as host of MSNB’s Emmy Award-winning Rachel Maddow Show where she often unveils the seamier sides of US and world affairs. The often muck-raking journalist can be sensational, but she does so with the skills of a Ph.D. in politics from Oxford University.

She does not footnote every assertion but provides a wide-ranging bibliographic essay at the end of each chapter. Her sources include, inter alia, the transcripts of US court cases, fact sheets of the US Geological Survey, the website Rosneft.com. books by leading academics such as Thane Gustafson and the late Karen Dawisha; research at the National Chengchi University in Taiwan; and lengthy reports in The New Yorker, The Economist, and The Guardian. Though not all her claims are based on original research, she masterfully integrates information from many quarters.

The book’s 29 chapters examine many facets of the main thesis. A chapter entitled “The Genie” tells how fracking began and how it has evolved. Seeking to tap a huge pool of natural gas more than 8,000 feet below the surface, the Atomic Energy Commission in 1969 used a 50-kiloton nuclear bomb to create a 300-foot high cavern. Tests conducted over 108 days suggested a flow equivalent to ten years of natural gas at conventional drilled sites in Colorado. The gas however was radioactive with tritium and Krypton-85. The AEC tried again in 1973, once more  in Colorado. It exploded three 33-kiloton bombs at three separate levels within 851 feet of each other. But radioactivity proved dangerous and commercial prospects disappeared. The usable gas was valued at only 40 percent of the costs.

Fracking turned a corner in the early 21st century. A combination of slickwatered hydraulic fracturing and horizontal drilling made fracking in many places a profitable enterprise. The United States began to produce more natural gas than Russia, but dangers remain. Hydraulic fracturing often seems to induce earthquakes and to poison water supplies.

The book contains much material to make many readers irate, but also some that is downright entertaining. The chapter on Russian illegals posing as Americans, some for nearly 20 years, records that they proved not just inept but ludicrous. Seeking a graduate degree from New York University, a certain “Richard Murphy” studied for three years under professor Nina Khrushcheva, great-granddaughter of ex-Soviet leader Nikita Khrushchev.

Murphy presented himself with an Irish name ever though his English revealed a heavy Russian accent. All ten illegals were under FBI watch for years. Arrested in 2010 and found guilty of many crimes, they were deported and flew back home in a prisoner exchange. In Moscow they experienced a hero’s welcome, even though they had seldom discovered anything not found in local newspapers.

The final chapter is “Containment.” Left to its own devices, the oil and gas industry will continue to do its thing and make money. It will corrode democratic governance and injure the planet. To contain the industry, regulators could go after some low-hanging fruit. For example, fossil fuel producers should be required to disclose all payments to governments. More problematic but important, polluters should be forced to pay for the damage they cause. To effectively contain the fossil fuel industry will be difficult, Maddow concludes, “but the stakes should motivate us. Democracy either wins this one or disappears. It oughta be a blowout.”

Walter Clemens is Professor Emeritus of Political Science at Boston University. He is the author of more than 20 books, including Complexity Science and World Affairs. His many articles on both domestic and international affairs have appeared in scholarly journals as well as The New York Times, The Washington Post, The Wall Street Journal, and other leading newspapers in various countries. His latest book is The Republican Virus in the Body Politic: How to Reboot America.