Blooms of Darkness: A Novel 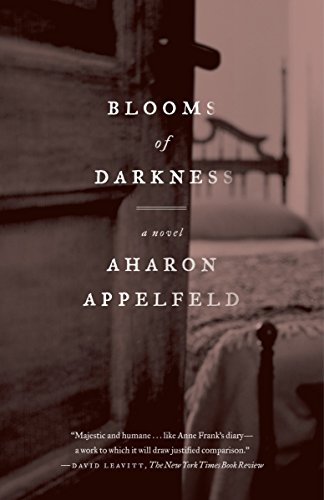 Aharon Appelfeld’s Blooms of Darkness (originally published in 2006 as Pirkhei Ha’afeilah) conveys the Shoah experiences of Hugo, an eleven-year-old Jewish boy who witnesses the arrest and deportation of his father and his neighbors, is separated from his mother, and then spends nearly two years in hiding. In this respect Blooms of Darkness differs from many of Appelfeld’s previous novels which tend to portray either European Jewish communities in the years immediately preceding their destruction or survivors in the years following (and sometimes both), but tend to avoid the actual events of the Shoah itself. This time the plot unfolds entirely during the years 1942–1944, and as it does we share the young protagonist’s senses of fear, loss, loneliness, abandonment, boredom, as well as the comfort, kindness, love, and sometimes neglect he receives from his protector. Like Appelfeld’s boyhood home Czernowitz  (now known by its Ukrainian name Chernitvtsi), the unnamed city in which the novel is set is located in Bukovina, a section of western Ukraine near the Carpathian Mountains that was part of the Austrian-Hungarian Empire prior to the first World War, part of Romania between the wars, and is now part of Ukraine. Hugo’s parents are German speaking university educated secular Jews, vegetarians, and humanitarian pharmacists who provide medicine regardless of their patients’ ability to pay. Hugo has also learned to speak fluent Ukrainian from the family’s servant, Sophia. He and his two closest friends appear to be only children (no siblings are mentioned). He is a polite, emotionally and physically healthy, good-natured boy who is bright but not as intellectually gifted as some of his friends. When the novel opens the Jews are already segregated into a ghetto; Hugo’s father Hans had been arrested and conscripted to a labor brigade a month earlier. His mother Julia and the parents of the children that have not yet been arrested and deported in the German occupiers’ daily “Actions” are trying to find peasant families willing to hide their children. Often arrangements are made and the peasants fail to show up.  Appelfeld conveys the terror that grips the ghetto during its final weeks. When no peasant family is found Julia takes Hugo to a brothel where Mariana, one of the prostitutes and a girlhood friend, agrees to hide him in her walk-in closet that will become both his refuge and his prison. After a brief farewell Julia leaves to try to find a hiding place of her own in another town. Hugo must stay in the unheated closet at night when Mariana receives her customers who are the very German soldiers who conduct house-to-house searches for hiding Jews. In the morning she brings him food, and he can stay in her room until evening. Mariana is devoted, loving, lonely, self-absorbed, undisciplined and an alcoholic with a poor sense of boundaries. The reader fears her emotional instability and drunkenness will cost her her job and Hugo’s hiding place. Hugo emotionally sustains and reveals himself to the reader in reminiscences of family life at home, dreams, daydreams, and letters he writes to his mother in his notebook. He and Mariana emotionally support each other in what becomes a loving but incestuous parent-child relationship. Mariana saves Hugo’s life at the cost of his innocence.  Hugo is not Appelfeld’s first juvenile protagonist. The Age of Wonder, for example, is told initially by a thirteen-year-old first-person narrator during the pre-war years, which helps the reader understand the post-war adult he becomes in the later sections. Blooms of Darkness, however, is told by an omniscient third-person narrator; perhaps the adult author needs this aesthetic distance to discuss his younger fictional alter ego (for a first person account of Appelfeld’s childhood and adolescence see his memoir The Story of a Life; of his own Holocaust experiences Appelfeld claims to remember nothing—perhaps he has successfully repressed everything).  A recurring theme in Appelfeld’s fiction is the sense of loss felt by gentile Europeans after the murder of their upper middle class Jewish neighbors. In Blooms of Darkness this is expressed by Mariana and her colleagues’ fond recollections of their former Jewish customers’ tenderness, consideration, and gentle lovemaking in contrast to the brutal treatment they receive from their gentile customers, especially German soldiers. Are Jewish men really less likely to be abusive to their partners? While this strikes me as stereotyping, it is also true that stereotypes are based on generalizations that are not entirely baseless. I was also struck by the hostility toward prostitutes not only by the Red Army, but by ordinary Bukovinans, a prejudice which perhaps is less widespread after the sexual revolution but unfortunately is still with us here in the twenty-first century United States.  Spoiler alert: Blooms of Darkness’s dust jacket’s hints all but give the plot away—Mariana saves Hugo but he cannot return the favor after the Germans retreat and together they try to evade the Red Army who are arresting all women who slept with the enemy—but that should not diminish the reading experience. Appelfeld’s prose style has been compared to that of early Hemingway short stories, which is evident in Blooms of Darkness’s short direct sentences. I don’t have a copy of the Hebrew original with which to compare Jeffrey Green’s translation, but it reads beautifully; if I didn’t know the book was written in Hebrew I would not have guessed this is a translation. The book is divided into very short chapters, which makes it appropriate reading for commuters. I enthusiastically recommend Blooms of Darkness to all thoughtful and sensitive readers.