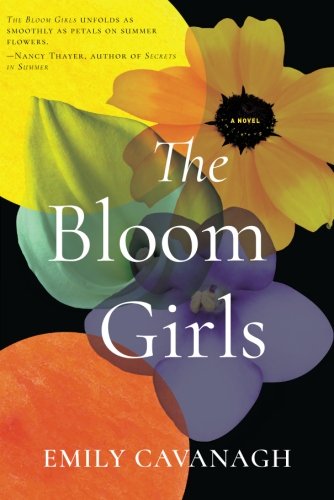 The Bloom girls lost their father when their parents divorced, yet when they learn of his passing from an aneurysm, it's like losing him again. Fired from his much-loved teaching job, he moved to Maine to open a restaurant two years after his marriage ended.

Cal, the oldest of the three daughters, is closest to him. A student at Yale when her parents split, she strived to get ahead and accomplish every goal she set to where she boxed herself into a corner. She is a successful lawyer, married, and with two young girls, always remaining stalwart and commanding. She learns of her dad's passing and becomes inconsolable. Her thoughts revert to their closeness:

"At some point, Cal had stopped having fun. Or, when she really looked at her life closely, somehow had never learned how to have fun . . .

". . . Her father hadn't been 'fun' either, but he knew how to access something in Cal that few others did. He had seen through the external shell she offered up to the world. He had seen her fear and insecurity that lay beneath it. With her father, she could doubt herself, because she knew he would build her back up. Most of Cal's life was about being in control—taking care of 'everything.' But with her father she could be needy and soft because he would be strong and in control for her."

Cal arrives at the cottage they are to share before her siblings. She shuts down by crawling into bed, and the others arrive not knowing what to make her unlikely behavior.

Violet, the middle sister, is ambivalent in her feelings about her father. She remembers him as gentle and loyal, but when rumors acted inappropriate with the young men on the swim team he coached, she became perplexed. When this happened, and he didn't fight for himself, she withdrew from him. At 15 and confused, when the divorce is announced, she considers it his admittance of wrongdoing.

Her life is a hodge-podge of activities as she is promiscuous and carefree. Determined to be a poet, she teaches classes at Boston University and at a high school to support herself. She breaks off a relationship with the only man who seems to love her and crashes at a friend's. This is her observation of her current lifestyle:

"She was tired of the artist's struggle. She was too old not to be able to pay her rent, too old to be living with roommates, far too old to be sleeping on someone's couch. Maybe a little stability wasn't such a terrible thing. And maybe it was time to let go of an identity she created for herself when she was too young to know any of those things would matter. Maybe her father had really known what was best, and Violet had shrugged away his words, too stubborn and angry to bother listening."

Meanwhile, Suzy, the youngest had been kept in the dark regarding her parents' breakup. Young when it happened, Cal, Violet, and their mother wanted to protect her. At her job, she falls in love with her boss, declaring herself a lesbian; however, theirs is a tenuous association, and when things go bad, she runs to the comfort of an old boyfriend and ends up pregnant. She never realized her father's perspective of her, and now upon his death, she ponders the past:

"Suzy often wondered if her father had wished for a boy if maybe her birth had been a final and unsuccessful attempt. He'd never made her feel like a disappointment, but she knew there were times he felt unnumbered and out of his depth with the problems and drama of raising three daughters. As children, they were as close to him as they were to their mother, but as they entered adolescence, each of them slowly distanced themselves from him. It was hard to know how much of this had to do with their divorce or if it would have happened eventually, but the three of them came to rely on their mother, or more often, on each other."

The sisters are now thrown together in an awkward position. Cal sequesters herself to a bedroom not wanting to be disturbed, leaving Violet and Suzy stymied about how to proceed with funeral arrangements. Fortunately, their dad's partner steps in to handle everything, taking this weight off their shoulders, though their guilt prevails.

Through this confusing and emotional situation they share their anguish, while discovering things about themselves and their dynamic, which brings them closer together. The Bloom Girls is a profound story of love and loss while demonstrating how remorse and unleashed secrets can harm a family.