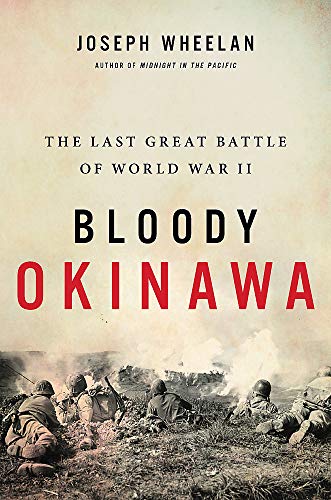 “Joseph Whelan does a deft job of blending ground and naval actions with the Japanese accounts of the battle, writing a gripping and timely account in time for the 75th anniversary of the last campaign of the Pacific War.”

Sandwiched between the final defeat of Germany and the atomic bombing and surrender of Japan, the 12-week campaign to secure the island of Okinawa, the last major battle of the Pacific War, has often been overlooked. However, this grinding and bloody campaign was both strategically vital and tactically horrific, and this new volume provides a balanced and well-written account of not only the ground combat, but the offshore kamikaze campaign against the US Navy and the terrible toll on the island’s civilian population.

Considered the final stepping-stone before the anticipated invasion of the Japanese main islands, Okinawa was the first assault on the Japanese home island chain and the first battle with a significant Japanese civilian population since the Marianas Island campaign of the year before. The island hosted an excellent harbor and multiple airstrips to house the armada of American bombers and fighters to support the invasion of Kyushu planned for that November.

The Japanese were also aware of these facts and prepared for the likely American invasion by constructing a dense and interconnected series of fortifications across the southern part of the island. Lt. Gen. Mitsuru Ushijima, the garrison commander, had studied previous Japanese island defense plans and knew that keeping the Americans from coming ashore was unlikely.  Therefore, he designed a defense to create as many American casualties as possible, trading the lives of his soldiers for what he hoped would be a horrific attritional struggle that would help convince the Americans of the futility of invading Japan proper.

As part of the strategy of trading Japanese lives for a vain hope of a negotiated peace, the Japanese also made plans to attack the invasion fleet with waves of kamikaze aircraft, in effect the world’s first guided missiles where their pilots, many with minimal training, were determined to die for their Emperor. Using numerous Japanese sources, Joseph Whelan does an excellent job of presenting the view “over the hill” at the Japanese preparations and strategy for the campaign.

Once the Americans came ashore, the first part of the campaign was deceptively easy as the Japanese waited in their fortifications and most of the island was quickly overrun. But once the Americans turned south they quickly encountered the massive defensive lines, and the fighting rapidly became an attritional battle of brutal intensity. The American forces could not bring the full weight of their overwhelming firepower to bear, and Whelan recounts the infantry firefights that quickly ground battalions to companies and companies to platoons as the Americans had to reduce the interlocked Japanese defenses and fight off numerous local counterattacks.

At sea, the first of many waves of hundreds of Japanese kamikazes pummeled the US Navy, sinking over 30 ships, and severely damaging dozens more, including several aircraft carriers. This was the costliest battle of the entire Pacific war for the Navy, causing more casualties than even the desperate fighting around Guadalcanal nearly three years earlier. Although the Navy made numerous tactical adaptations to meet this new threat, the constant attacks began to fray the Army-Navy relationship as the Navy continued to provide logistical, gunfire, and close air support to the heavy ground fighting.

As the US forces continued their march down the island, the Japanese defenses finally started to crumble, and the island was finally declared secure on June 22, 1945. The heavy casualties among the soldiers and Marines and the fanatical resistance to the death of nearly the entire Japanese 32nd Army and an alarmingly high percentage of the civilian population no doubt gave US leadership pause as they planned for the invasion of Japan progressed.

The strategic influence of the Okinawa campaign on the American decision of using the atomic bombs to stave off an invasion of Japan is pretty clear. Joseph Whelan does a deft job of blending ground and naval actions with the Japanese accounts of the battle, writing a gripping and timely account in time for the 75th anniversary of the last campaign of the Pacific War.