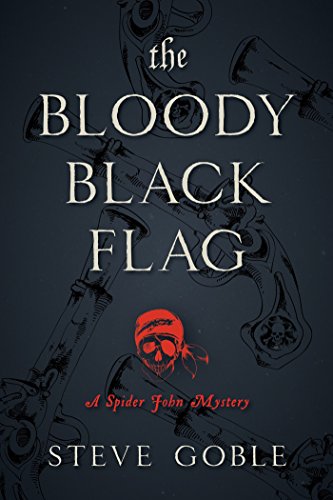 “a murder mystery set on the Spanish Main . . . will entertain for its different view of pirate life.”

Reluctant pirate Spider John Rush and best friend Ezra Coombs are back at sea. Not because they want to be, but because that’s what Fate decreed.  All Spider wants is to return to Nantucket and his wife and son. As his talisman, he carries an ivory heart he carved for his wife to keep him safe until he can give it to her.

This time, they’ve signed on with the Plymouth Dream bound for Jamaica.

“They were all running from something. Blood brothers against a hostile environment. And they were given little choice in the matter.”

Immediately, Spider has doubts about the Dream’s seaworthiness. “‘Surprised this leaky bucket floats at all. I believe there are more worms than wood in this thing.’”

Soon, he’ll have more to worry about. Once aboard, the captain takes their weapons, and Ezra spots an old acquaintance, many-tattooed and very hostile. “‘His name is Tellem and he hails from Salem. He knows . . . he knows of my witch blood.’”

Ezra’s mother and grandmother were executed as witches. So was Spider’s Gram, but he keeps that hidden.

The Dream’s captain is Barlow, fanatical, and nearly, if not completely, a lunatic.

“‘We are outlaws, marked men, and now so are you.’” Barlow’s eyes blazed. “If we are caught, we will swing. But I’ll tell you this. I’ll not hang. No sir. I will run or I will fight but I will not hang and you, gentlemen, you will run or fight with me.’”

Soon there’s dissention among the crew caused by Tellem’s reports of Ezra’s “witch blood.” In its wake, the unbelievable happens . . .

“Ezra stared up at the stars, seeing nothing of this world. But he was not dead drunk. He was dead.
Spider leapt forward, ‘Lord, no!’”

The verdict is that the drunken sailor fell, hid his head and died. Spider knows that didn’t happen for Ezra didn’t drink. So the whiskey flask found beside him must belong to the murderer.

No one will bother saying words over Ezra’s body, and Spider must give his friend last rites as best he can.

“‘Heaven ain’t got no use for him,’ Barlow said. ‘Say your words, then haul him up and over into the deep and out of my sight.’
Spider sobbed as others headed elsewhere.
‘Ezra,’ he said quietly. ‘I’ll avenge this, brother. I swear it.’”

Spider uses a tattered Jolly Roger, the bloody black flag of the title, to wrap his friend’s body before it’s tossed into its ocean grave.

Soon after, there’s theft from the captain, an item he refuses to name. All he’ll say is that he plans to sell the thing to “a Frenchman” for enough money to make them all live like kings. He subjects the men to a humiliating strip search, shooting any who protest, but the item isn’t found.

For the rest of the voyage, through Captain Barlow’s increasing madness and cruelty, the specter of the missing object looms, as does Spider’s anxiety. He knows he must find the killer before they reach Jamaica, for once there the crew will probably disperse.

Behind them, trailing like a nemesis in the Dream’s wake, a phantom ship follows, making the atmosphere aboard the vessel more tense.

Shortly before they reach Jamaica, the Dream is boarded by the phantom ship.

“An explosion rang Spider’s ears, a bright flash erupted from the cargo hold.  The acrid tang of burnt powder filled his nostrils and a billowing ghost of black smoke rose from the hatch.”

In the turmoil of battle, Spider discovers not only the murderer but also the reason behind Ezra’s death, and knows he must survive to exact his revenge.

While not exactly the swashbuckling Treasure Island/Captain Blood-type pirate yarn, this novel is equally exciting in its own way. Detailing the shipboard activities of a pirate crew rather than those bouts of pillaging and plundering, it balances the captain’s growing madness with Spider’s determination to stay alive and find Ezra’s killer.

There’s no romance as in the usual seagoing novel, no comradely banter or nimble derring-do. Nor is there a handsome pirate captain. The men of the Plymouth Dream are unscrupulous and ruthless, lost souls driven to piracy for one reason or another and accepting their fate with grim resignation. Occasionally, a glimmer of humanity shines through, as when Spider attempts to shelter the cabin boy Hob from the fight.

Not to say this different angle of narration is off-putting. If anything, it makes the story that much more intriguing. A murder mystery set on the Spanish Main, The Bloody Black Flag will entertain for its different view of pirate life. Its ending will no doubt lure readers into waiting eagerly for the next entry in the series to be released.