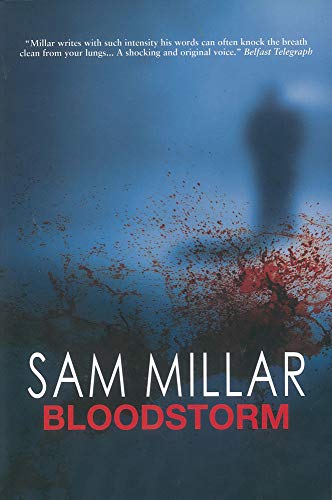 “Dusk was settling into Belfast, curling cat-ways for the night. The streets were deserted—everyone already where they wanted to be—and the city was fast becoming a startlingly quiet wasteland. The iron smell of rain was in the warm, muggy air.”

Innocently lyrical, no? It’s the start of Chapter 23 of Sam Millar’s The Dark Place, a chapter that dragged me through hell. Millar’s likable PI, Karl Kane, is violated by a hideous, deranged, probably disease-ridden creature. What happens pulled me from my comfortable life into the bowels of horror—bringing from my subconscious long-forgotten terrors, real and imagined.

That’s what noir does. And for Millar, it’s his own personal, fearless brand of noir art. I’ve just read Millar’s two Karl Kane novels, Bloodstorm and The Dark Place after learning of his work in an online discussion:

“My favorite noir writer is the controversial crime writer Sam Millar. If you want hard noir, read his critically acclaimed Kane books. But be prepared to be shocked.” —”Noir Fan” Shocked? Interesting.

Bloodstorm started with Bloodstorm. And before Chapter 1—in the prologue—I was, in fact, shocked, as gang of men perpetrate acts of nightmarish violence against a woman. I was almost ready to close the book and not read on.

I thought back to an excellent discussion/debate about violence against women in crime fiction “Getting Re-Sensitized to Violence,” by respected crime fiction analyst Sarah Weinman. One quote from Weinman: “. . . if all the other elements of a crime novel work, then be as violent as necessary.”

(But please do read the entire article; there is a much larger context.)

And Sam Millar himself told me—over email: “Yes, I came under a lot of criticism for the opening scene of Bloodstorm, but strangely not from women’s rights groups who said the scene described rape in all its horrors, and should be read by everyone.”

I won’t try to speak for women’s rights groups. Depiction of violence against women is a serious and controversial issue; but I do know, based on numerous e-mail exchanges with Millar, that he is in no way a misogynist and that the violence in his books (against women or men) is central to the plots and to the upheavals Millar causes in the depths of his readers’ consciousness.

And the horror in the prologue of Bloodstorm has the purpose of making the evil really evil, and the possibility of revenge that much more cathartic for the reader.

Kane, Naomi, and Mr. Munday I read on. The scene is about thirty years after the horror of the prologue. Millar’s detective Karl Kane appears, and he’s a likable, non-sexist and nonviolent guy. He’s an Irish version of Raymond Chandler’s wisecracking Marlowe, only more vulnerable and damaged. He doesn’t carry a gun and hardly knows how to use one. He’s a down-to-earth guy. In fact, the chapter opens with Kane in his office applying ointment to his hemorrhoids.

His receptionist and girlfriend, Naomi, barges in. (We learn later that, as part of Kane’s messy life, his marriage broke up when he found his wife in bed with a woman.) Naomi informs Kane that a Mr. Munday is waiting to see him. This mysterious Munday wants Kane to uncover “discreetly” “as much information as possible” about a body found in the Botanic Gardens. Munday hands Kane an envelope with five hundreds. And another five hundred will come when Kane hands over the information.

Who is Munday? Why does he need this information? As Kane and Naomi prepare to go to dinner, Kane thinks nervously about this “sketchy” case. And his “arse” begins to itch.

A second horror. Chapter 2 starts with a jolt, going back forty years to the horrendous story of a young boy who finds his mother brutally murdered and who himself is then stabbed and abused by the killer. But these unthinkable acts are described skillfully as Millar tells of the boy: “ . . . feeling the filthy knife tearing into him, his mother’s blood mingling with his own. . . . And thus begun his hell and all things dark.”

Soon it dawns upon the reader that this young boy is Karl Kane.

“Pretty Young Woman.” After the story of young Kane, we return to the present. Joseph Kerr, drinking in a pub, meets a “pretty young woman” who “smiles shyly” at him. He introduces himself and they end up having sex at his house. He later awakes from a mysterious drug-induced stupor, tied to his bed. He thinks some kinky sex is about to happen; instead the woman pitilessly tortures and murders him.

Two killings so far. Do they tie in to the brutal events of the prologue?

The Cops. Millar next introduces police detectives who operate at various levels of corruption. Among them are Chief Detective Wilson, Kane’s ex-brother-in-law, and the brutal Bulldog McKenzie, Wilson’s “right hand man.”

Millar says of the group of detectives: “ . . . their banter was casual misogyny, mixed with non-PC racial and religious jokes and blue soundbites.”

These are the cops that Kane must work with in his investigation. There’s one more detective. ”Tall, pretty with thick dark hair tied up in a regimental bun,” she is Jenny Lewis, a timid young officer who Wilson and the other officers insult and demean.

“Real cops have work to do. And as for you Detective Lewis, after you’ve cleaned the coffee machine . . . there’s a tower of files waiting for you.”

Jenny goes along, passive and obedient. Kane is sympathetic, saying that ignorant “old timers” such as these sexist officers should all be “put out to pasture.” But they ignore him and go back to considering the murders.

How will Jenny Lewis fit into this story? Has Millar put in this character to battle misogyny, to prove herself through a heroic act? Keep an eye on her and find out.

Evil Spawned by Evil. The murders continue—each with its own horrors, made even more grotesque by Millar’s uncompromising style of writing:

“ . . . this thing had once been human, but now, removed of all skin, it resembled something from an abattoir, freshly slaughtered with the stench of death and decay on it.”

This repugnant evil keeps the reader really on edge, and it keeps the plot as gripping as a torturer’s vice. Again, that’s Millar’s art, in all its grotesquely imaginative fearlessness.

Then the story races frantically toward its totally unexpected, disturbing, gothic climax. A cathartic climax, although things may not all work out neatly. As in much top-notch noir fiction, the climax drops the reader into a morass of moral ambiguity. Questionable justice may be gained, yet the world remains an unfair place.

Throughout Bloodstorm, Millar drags the reader through the hell of bloody violence, rape, murder, and torture to a not-very-comforting ending, though one that provides glimpses into the wisdom and insight that such hellishness can offer.

So get yourself through the prologue and allow Millar to lead you on this "bloodstorm" of a journey.