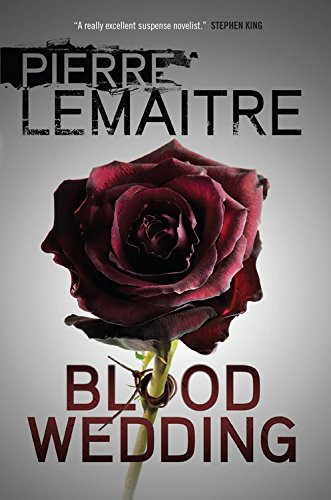 “In a suspense novel that is the literary equivalent of Hitchcock’s Psycho, Lemaitre presents a harrowing look into the link between madness and evil.”

Already a winner of multiple literary prizes for his crime fiction, Pierre Lemaitre exceeds expectations with his novel of psychological suspense, Blood Wedding. In a suspense novel that is the literary equivalent of Hitchcock’s Psycho, Lemaitre presents a harrowing look into the link between madness and evil.

A product of a happy marriage, and happily married herself to Vincent, Sophie Duguet is the epitome of a well-adjusted, gregarious, and mentally stable young woman—until she finds herself slowly going mad.

She loses her keys, misplaces her identity card, reports her car stolen because she forgets where she has parked it, suddenly develops insomnia, believes she has pushed her hateful mother-in-law down the stairs to her death, and has killed her own baby. On the advice of a psychiatrist she begins making extensive notes on her own behavior in an effort to combat her increasing madness.

When she awakens each morning in tears, she is not surprised. “Tears are an everyday occurrence in her life; she has wept every night since she went mad.”

After her husband’s suicide, Sophie has taken a series of jobs for which she is overqualified. At present she is the nanny for six-year-old Leo Gervais. When she goes to awaken the little boy, she finds him strangled with a shoelace from one of her hiking boots. “His face, pale and mottled, is turned toward her, but his wide eyes stare out at nothing.”

Not until the incessant ringing of the telephone “a ringing that cleaves the space, mechanical, maddening . . .” does Sophie react to her horrid circumstances. “Sophie does not know what to do. Call someone? Leave now? She has to choose between two evils. That has been the story of her life.”

Sophie runs, hoping to escape before the police arrest her for a crime she cannot remember committing despite the evidence of her own eyes. She must have done it; there was no one else in the apartment, and it was her shoelace.

Frantic and hardly able to overcome her own indecisiveness, Sophie accepts a stranger’s offer of help. When she regains consciousness after blacking out, Sophie finds a bloody knife in her hand and the young woman’s body on the floor. One more murder she cannot remember committing.

On the run from the police, Sophie works at a series of off-the books jobs, moving from apartment to apartment, sometimes from town to town, always terrified that she will be caught.

Finally she realizes that she do something other than running, so she buys a false birth certificate and signs up for a dating service. If she marries and takes her husband’s name, she will effectively disappear. She meets Frantz, not an ideal man, but he seems not overly intelligent and easy to manipulate. “Meet, marry, move abroad, work, divorce.”

In a plot twist that leaves the reader shocked, Frantz turns out to be not who Sophie believes him to be. He is not a simple soldier, but a controlling monster who is leading Sophie into a further spiral of increasing madness. If she underestimates Frantz, he in turn underestimates her instinct for survival.

Lemaitre ratchets up the suspense to an almost unbearable level as Sophie and Frantz pursue their separate goals: hers to survive and free herself from madness, and his to slowly torture her until he feels it is time to murder her.

As a trained psychologist Lemaitre knows how to portray madness so realistically that the reader never questions his first assumption that Sophie is indeed mad, a psychopath without empathy or remorse. When Frantz reveals himself as the true psychopath, there is a feeling of relief that one was not wrong in liking Sophie despite her murderous actions.

Blood Wedding is a terrifying novel as it reveals how easy one may drive another person into madness. It leads one to ask am I just a little forgetful, or am I mad? If I am mad, is it a natural occurrence, or is someone else responsible?

Blood Wedding is a gripping, troubling novel with believable characters and a watertight plot, an undeniable tour de force of psychological suspense that justifies Lemaitre’s international reputation as a crime writer.