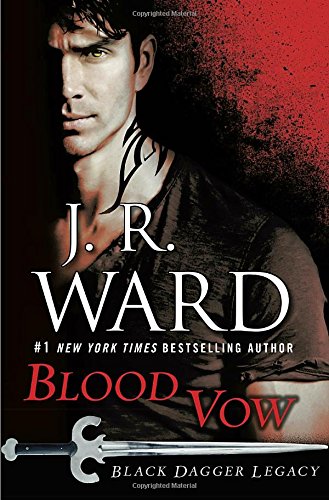 “This novel is sharp, sexy, and funny, with a heart that doesn’t quit.”

As hard as it is to be a massive, enormously strong, terribly ferocious vampire that fights otherworldly murderers, it might be even harder to be the treasured—or ‘blooded’—daughter of the vampire elite.

Elise, the daughter of a vampire aristocrat, wants nothing more than to be allowed to finish her doctorate at a human university. Following the grisly murder of her cousin in the first book of this series (Blood Kiss), though, her father isn’t sure that is a good idea. Enter her new bodyguard, Axe, the low-caste vampire who is rising up through the ranks of the Brotherhood’s new legacy team.

Elise and Axe have to fight a powerful attraction as the facts behind her cousin’s death are gradually revealed. Axe has personal demons to confront, as well. Their relationship seems doomed from the start, but Ward never lets that keep her characters from trying.

A second storyline involving Rhage (who must be Ward’s most popular character, as this is the third book which centers on him and his mate, Mary) and his imminent adoption of the vampire orphan, Bitty, starts almost immediately. He must fight his own anger to avoid jeopardizing the future he and Mary envision for their family.

Rhage’s storyline underlines an aspect that Ward has been ramping up for the last few volumes in both series: her emphasis on the importance of family. Ward set herself along that unusual-for-romantic-fiction road right from the beginning—the heroes aren’t called the Black Dagger Brotherhood for nothing. But with the addition of wives and especially children to the lives of the Brethren, Ward is doubling down on that identity for her vampires and their mates: “The great thing about family, Mary mused, was that they showed up. When it really mattered, your family, be they by blood or by choice, were always there when you needed them to be, even though they had busy lives and jobs and children of their own.”

Ward’s Brothers might be huge and “hot” and scary, but they are also family men, devoted each to their own “shellan” (mate) and to the family unit. This is something that sets Ward’s fiction head and shoulders above others in her field: she’s canny enough to realize that while great sex might be a fantasy for many women, security and comfort are bedrocks for any stable society, be it the vampire society of her books or the human society of her readers.

As astute as Ward’s judgment of her reader’s inner emotional needs might be, her story would have little impact without her strong writing skills. Ward has an easy, conversational style of writing that makes her books easy to read, a “hunker around the campfire and hear this story” vibe. Lovely prose like this: “Outside, the wind was strong and cold as a slap . . . The walkway was illuminated by lampposts, and sure enough, delicate flakes were wisping in and out of the light as if they wanted to dance with each other but were feeling shy,” is set off by one-liners, crude jokes, believable dialogue, and action scenes worthy of a Lee Child novel.

Each J. R. Ward novel, be it in her BDB series, the BD Legacy series, or her Bourbon Kings series, is a master class in fiction. Not just romantic fiction but fiction. Blood Vow is no exception. This novel is sharp, sexy, and funny, with a heart that doesn’t quit. The lady knows her readers, that’s a given, but her writing style would be at home in any genre.