Blood on the Trail (A Jeremiah Halstead Western) 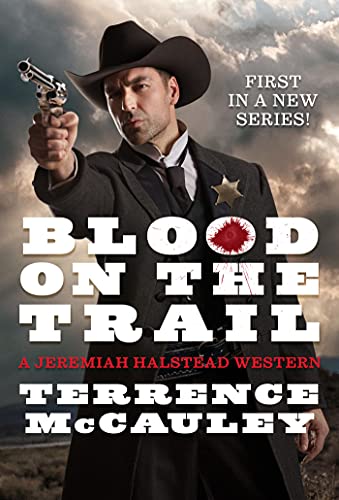 “The lone deputy surrounded by a gang of outlaws determined to rescue their boss while a hostile town looks on may be a cliché, but Terence McCauley gives it several twists.”

Deputy US Marshal Jeremiah Halstead is returning to Helena, Montana, with his prisoner.

John Hudson is leader of the outlaws known as the Hudson Gang, a group “having a reputation throughout the territory as being a brutal determined band of stone-cold killers.”

The gang has taken over the town of Rock Creek and killed the mayor. Bringing their leader to justice is 24-year-old Halstead’s first assignment as a marshal. He succeeds but is now being pursued by Hudson’s men, determined to free their boss.

Stopping in the town of Silver Cloud overnight, Halstead checks his prisoner into the local jail, only to be routed by the sheriff who refuses to believe he’s a marshal.

“He saw Sheriff Boddington aiming a shotgun at his belly. If it had not been for the sheriff star pinned to his vest, Halstead could have easily taken this man for a member of the Hudson gang.”

Halstead has to prove his identity to the sheriff the hard way.

“Boddington and his men were like most of the law he had seen in towns like this time and time again. Bullies with badges and nothing more.”

Eventually Halstead wins the braggart over, which is a good thing when a telegram to his superior in Helena brings the order for Halstead and his prisoner to stay in Silver Creek until further notice—with no explanation.

There are definitely some interesting characters in town: a saloon girl who reads the Communist Manifesto; a gambler acquainted with Halstead’s late father, a former US marshal; and a Mexican family running the only hotel in town.

It doesn’t take long for the town to be surrounded by Hudson’s men and for the townspeople to take sides. Further complicating matters is the fact that the town is owned and run by Emmett Ryan, owner of the local silver mine, and head of the Silver Cloud Mining Concern. Ryan isn’t going to like a stranger riding into town and turning his town into a shooting gallery.

“‘McAlister told me there’s a good amount of money going around about how long I’ll live.’”

When a saloon girl is killed and Halstead gets the blame, it looks like the deputy is going to be fighting enemies both inside the town and out. It’s going to be hard to decide who to trust and who to shoot.

The lone deputy surrounded by a gang of outlaws determined to rescue their boss while a hostile town looks on may be a cliché, but Terence McCauley gives it several twists to keep it more than interesting.

When the Hudson Gang rides into town, the townspeople themselves will have face up to the consequences and make a few serious decisions. There won’t be a classic shoot-out with a lone lawman facing down a bunch of ruthless killers, but there will be a surprise showdown for everyone, because “At least one man in The Green Tree saloon was a man of his word.”

This is an action-filled story with some very good character studies.

Though some of the players may seem a bit stereotyped, McCauley doesn’t let them stay that way. Mineowner Ryan, Sheriff Boddington, and the others have their selfish reasons for the things they’ve done, but they also genuinely have their town’s safety at heart, as well as a sense of what’s right and wrong. Underneath those iron-hard exteriors, there may not be hearts of gold, but they definitely aren’t made of stone, either.

Without having read the Aaron Mackay series, also written by this author, it’s difficult to know for certain, but this series appears to be an offshoot of that one. There are many references to Halstead’s father, and an incident occurring at a place called Dover Station, an incident ending with the younger Halstead going to prison for three years. Apparently, Halstead has just been released and inducted as a US Marshal shortly before this story begins.

The conversations Halstead has with his deceased father during his contemplative moments shows a relationship between father and son that one wishes to know more about.

These tantalizing bits are a good reason for the reader to find that series, also, whether to provide more background for Jeremiah Halstead’s story or simply to enjoy another Terence McCauley series.

Either way, this new series is off to a rousing start, with hopefully many more to come.