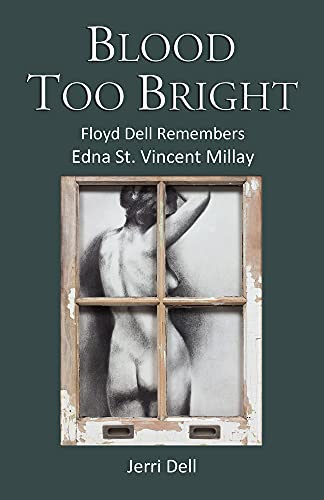 “. . . introduces Millay as a fascinating personality. . . . an iconic American female (and feminist) poet . . . and the book enhances details of her life long overlooked.”

Blood Too Bright by Jerri Dell is a mélange of literary genres. The author interweaves memoir (published and unpublished), letters, magazine articles and other memorabilia by the author’s grandfather, Frank Dell (1887–1969). This mélange comprises Floyd Dell’s writings on the famous poet Edna St. Vincent Millay (1892–1950).

The setting and the times are fascinating—and well portrayed—bohemian Greenwich Village in the early 20th century seething with artists of all stripes including young Floyd and Edna St. Vincent Millay. Millay, an enigmatic, charismatic poet was wedded to poetry and lived as a “New Woman”—she did not believe in the traditional institution of marriage, had many affairs, championed social justice causes especially for women, was anti-war, and already a well-known poet.

This is a book about Millay as told through the eyes of her lover, Floyd Dell, around a hundred years ago. At that time Dell, himself, was an aspiring writer. Their love affair was fraught with moments of genuine communion but mainly wretched misery for Dell, who loved Millay and was spurned repeatedly.

In his autobiography Homecoming he wrote, “Though one could not but love her, one loved her hopelessly, as a goddess must be loved . . . at moments a scared little girl from Maine, and at other moments an austere immortal, was something which drove everyone who knew her to writing poetry in the attempt to express the recognition of her lovely strangeness.”

After their affair ended Dell, himself married, earned his keep writing—as a newspaper and magazine editor, literary critic, novelist, playwright, and poet—in Washington, D.C. He spent much of his creative writing energy on writing about Millay who clearly inspired him throughout his life.

Did he succeed in expressing “her lovely strangeness”? His granddaughter certainly thought so after finding a trove of his letters, the unpublished memoir, and other writings, mainly a lengthy correspondence with Muriel Gurko, who approached him when she was writing a biography of Millay for younger readers. Hence this book was born.

After her affair with Dell, and many other torturous relationships, Millay eventually married and moved to upstate New York to live on a farm near Austerlitz. She became a reclusive figure protected from the glare of publicity and other intrusions by her husband.

Plagued by illness and financial problems, her writing somewhat diminished but she rallied and her later work in the years before her death is considered among her best. Perhaps in rural Austerlitz she found she was the one who could best express her “lovely strangeness” as in this prescient excerpt:

And here a while, where no wind brings
The baying of a pack athirst,
May sleep the sleep of blessed things
The blood too bright, the brow accurst.
(From “Weeds” April 1921)

Happily, Jerri Dell’s mélange effectively succeeds in bringing artistic lives and the milieu of Greenwich Village to life. For a generation of students a hundred years on, and those interested in early 20th century American literature, this book introduces Millay as a fascinating personality. Her reputation as an iconic American female (and feminist) poet is already secured, and the book enhances details of her life long overlooked.