The Blood Telegram: Nixon, Kissinger, and a Forgotten Genocide 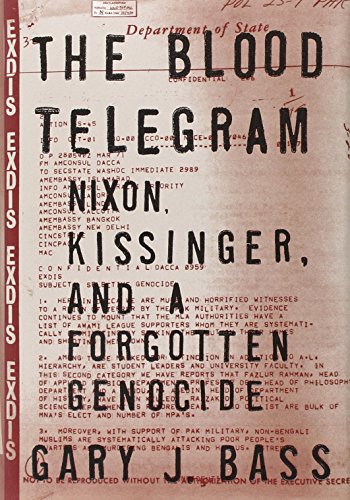 If you thrive on minutiae and have a passion for political history then The Blood Telegram: Nixon, Kissinger, and a Forgotten Genocide is your cup of tea.

Author Gary J. Bass has done extensive research on the topic of the election in Pakistan in the early 1970s that resulted in the genocide of a part of the country, in particular the Hindu population that occupied East Pakistan and how this event lead to war between India and Pakistan and ultimately, the creation of Bangladesh from the ashes of East Pakistan.

Mr. Bass quotes multiple sources—tapes, interviews, letters, and of course, the subject telegram, to make his point. There are times when the book is difficult to follow due to the massive amount of detail.

His story does not always follow in chronological order and he frequently jumps backward to make a point or explain an event. This criticism must be diluted in part because in many instances the subject of a particular chapter requires background in order for the reader to understand how a situation came to be.

The title of the book is a hook, but the subtitle is more accurate to the topic. The Blood Telegram that catches one’s attention is a telegram sent by Archer Blood, Ambassador stationed in East Pakistan during the genocide that occurred after the Pakistani elections. But the book goes further than just the telegram to describe the birth of a new nation.

In the preface, Mr. Bass gives a concise history of the events that led up to election for Pakistan’s president—an election that defied the pundits when the one man who was not supposed to win . . . Sheikh Mujib-ur-Raman (referred to throughout the book as Mujib) did indeed win.

The book continues with extensive background of the hatred that President Richard Nixon had for India, and the almost pathological adoration he showed at the same time for Pakistan and it’s dictatorial leader, General Agha Muhammad Yahya Khan, referred to as Yahya.

Kissinger, in his role as National Security Advisor, maintained an obsessively close relationship to Nixon, often fueling Nixon’s feelings on every topic Pakistani or Indian.

Throughout the book, Mr. Gass emphasizes how Nixon and Kissinger ignored the war that Yahya was waging on his own people and especially directed at the Hindus. The leaders of America buried the reality of the situation under the guise of not interfering with the internal problems of another country; while at the same time, providing the very arms that were used by General Yahya to bear down on the East Pakistanis.

Although the focus of the book is the election and how it resulted in a civil war between East Pakistan and West Pakistan, the situation is not as simple as that, as Mr. Gass details the many layers of actions and how each played a role in Nixon and Kissinger ignoring this catastrophic event.

Behind-the-scenes Indira Ghandi, no fan of the United States government, was faced with an influx of millions of refugees from East Pakistan, rushing across her borders in search of a safe haven.

Add to that the behind-the-scenes efforts of Nixon and Kissinger planning to open conversations with China—an enemy of India. Stir in the close relationship developing between India and the Soviet Union in the middle of a Cold War, while on the home front, the meddling (as Nixon and Kissinger saw it) of Senator Edward Kennedy who visited India at the peak of the refugee influx to see the horror first hand. Stir each of these items together in one great big pot and you end up with a bouillabaisse not fit for even the strongest political palate.

The thread of the story weaves throughout the many secret alliances, deep-seated hatreds, mistrusting relationships, and assassinations until it reaches the only possible conclusion: war between India and Pakistan. That event occurs on December 3, 1972 when Pakistan attacks India and sets in motion the ultimate goal of East Pakistan—autonomy under the name of Bangladesh.

This book is at times difficult to follow, but the underlying story is so interesting that is it well worth the read.