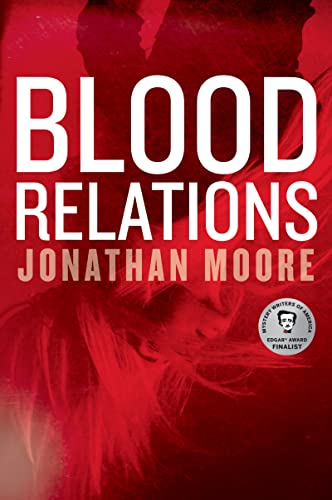 “Blood Relations is a psychological thriller-cum-horror tale trembling on the brink of reality.”

It’s not everyday someone sees a falling body demolish the roof of a Rolls Royce, but that’s what PI Lee Crowe witnesses as he’s returning from a stakeout in the Tenderloin, one of the most dangerous sections of San Francisco.

“She didn’t look like a corpse. She was utterly composed. A woman asleep on a bed of steel.”

A bad way to commit suicide, but Lee, being the resourceful type, sees profit for himself. Utilizing the camera from the stakeout, he photographs the corpse, selling them to the Chronicle.

It’s only later that Lee learns the name of the victim. She’s Claire Gravesend, only child of one of the richest women in California. Olivia Gravesend has his name from those photographs now published in the Chronicle but she isn’t out to get Lee for that. She doesn’t believe Claire jumped, and she wants to hire him to find out the truth.

Lee’s on a bit of a bind right now. Seems that stakeout was successful in framing a material witness in an ongoing trial, and the police would like to talk to him about why their case just went south. Attorney for the defense, Jim Gardner, Lee’s boss when he was a lawyer himself, is also Olivia’s attorney, and thinks taking the case might be best for everyone involved.

Soon Lee’s backtracking Claire’s steps before her fatal swan dive back to Boston where she was going to school. Her investigative journalism teacher explains she was onto a topic for the class but wouldn’t say what, only that it had to do with genetics and cloning.

Something odd: a neighbor swears she saw Claire at her apartment the day before but that can’t be. Claire was already dead by then. Three thousand miles away in California.

Surely she’s mistaken about the time?

Learning Claire bought a house in California, Lee returns to San Francisco to find the house.

It’s occupied, by Claire Townsend—or is it her?

“It was her. It could be no one else. I’d found her on Turk Street, had touched my fingers to her throat, found no pulse, and now she was looking up. Her eyes meeting mine.”

The young woman looks exactly like Claire but she says her name’s Madeleine. She knows Claire. They met accidentally, and together were trying to determine if they are related. DNA tests say they are, but they also reveal something more.

“We’re identical twins,” Madeleine said. “I’m older because Claire was frozen as am embryo. I was implanted but Claire stayed in the freezer. We might have had different mothers, too.”

With that moment, Lee’s case changes from a simple investigation into something nightmarish, the kind of thing found only in Grade-B horror movies.

As he and Madeleine continue their search, they discover the conspiracy causing Claire’s death reaches high into society and government strata.  There’s a missing Korean geneticist, plenty of the rich and famous, even Jim Gardner may be involved—as well as a great many people who plan to live forever, and they don’t intend to let one private investigator and a dead woman’s lookalike stop them.

“For a moment, I thought I understood eternity. What it meant to live forever and what it meant to die, but I had already chosen and I felt nothing but acceptance.”

At one time or another, everyone has probably wished he had a twin, someone whose thoughts, hopes, and plans are compatible with his own because they are so similar. At the same time, one of human’s greatest fears is loss of identity, of one day rounding a corner and coming face-to-face with someone who not only looks like himself but acts the same, that so-called doppelganger, the ghostly image whose stolen his identity. Imagine the terror in discovering this to be true, that you’re not the unique individual you’ve always assumed but only one of many selves, a copy of a copy, as alike as all the others on a genetic assembly line.

At first the story seems the usual crime noir adventure, with the financially powerful but grieving mother, accustomed to getting what she wants, hiring a private detective to prove her daughter didn’t commit suicide. The moment Madeleine delivers her bombshell of an announcement that she and Claire are twins with a three-year age difference, the tone of the story, as well as its theme switches from mystery to sci-fi and from there to horror.

Told from Lee’s point-of-view, Blood Relations is a psychological thriller-cum-horror tale trembling on the brink of reality. It may give the reader a great deal to think about—and cause him to look to the future with dread.