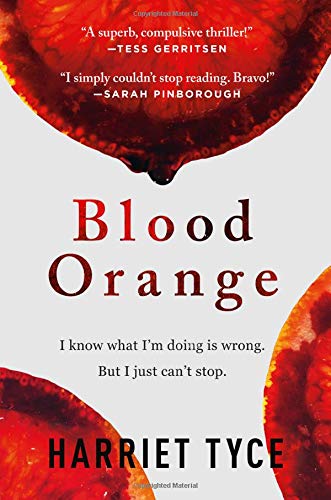 “A hybrid tale of legal thriller, psychological suspense, and ghastly murder . . . dark and twisted, it will keep readers awake well into the wee hours.”

Fast reads are often a sign of quality. Harriet Tyce’s Blood Orange, a debut novel of domestic noir, succeeds where established writers have not. Tyce, a former London barrister, gives us a hybrid tale of legal thriller, psychological suspense, and ghastly murder.

The characters are nuanced. Clues are well planted. Conflict arises steadily. The action through lines are deftly woven as they churn up a toxic brew of passion, jealousy, betrayal, manipulation, hatred, and love.

The frisson extends over 337 pages. The dialogue is a workhorse of craft: “Tequila? Yes, tequila. Another shot. Yes, a third.” The book fortuitously coincides with the #MeToo movement.

Forty-year-old Allison has just been assigned to defend her first murder case after having worked without recognition as a criminal barrister for over a decade. She supports a husband, a therapist specializing in relationships and sex addiction who ironically stopped being intimate two years ago, and a six-year-old daughter who adores her.

The affair she is having with a senior law partner who holds enormous sway over her career is psychologically manipulative, physically degrading, and mentally humiliating. Yet Allison is desperate for his affection and consoles herself with the smallest dregs. She fantasizes having violent sex with him.

Meanwhile at home she has to contend with a controlling husband who berates her blackout-level drinking even as he enables it, and who never misses an opportunity to express his disappointment in her. He forces her to watch video evidence he has filmed of her embarrassing behavior. “Actions have consequences,” is a favorite phrase. And yet he hates it that the daughter demonstrably loves Allison more than him. “I can’t bear that. You’ve set her against me, I know it.”

Allison’s client, Madeline, has been arrested for stabbing her husband 12 times (he is so monstrous that he surreptitiously put birth control pills in her tea to avoid the inconvenience of having to mind another child). Madeline doesn’t deny she did it. In fact she’s inexplicably eager to plead guilty. At the same time, she is maddeningly not forthcoming. The deeper Allison digs the more she suspects something amiss in Madeline’s story.

But then there is something amiss in Allison’s own life, too. She fails to register the parallels in her family life with that of Madeleine’s. Instead, her psychological defenses are honed to perfection: denial, rationalization, attributing her own desires to other. “On the upside, I’m not on bail for Carl’s murder, so maybe things could be worse.”

She idealizes everything, fantasizing a relationship with her daughter that surpasses the real one. “I can see exactly how we should be as a family. It’s going to happen. I’m going to make sure of it.” But of course she gets blindingly drunk again and never lives up to any of her promises. Allison remains willfully blind to her alcoholism and its consequences. “I promise to do better.” “I’m trying, I really am.” “If only I didn’t get so drunk.”

As the affair with her senior colleague degrades, Allison is confronted on her phone by an obsessive, cruel stalker intent on exposing her and pushing her to the breaking point. In an understatement Allison concedes of, “A fear lurking in the corner of my mind that I’ve mishandled it all somehow.”

Blood Orange is dark and twisted, and will keep readers awake well into the wee hours as the plot hurls toward its surprising conclusion.