Blood, Oil and the Axis: The Allied Resistance Against a Fascist State in Iraq and the Levant, 1941 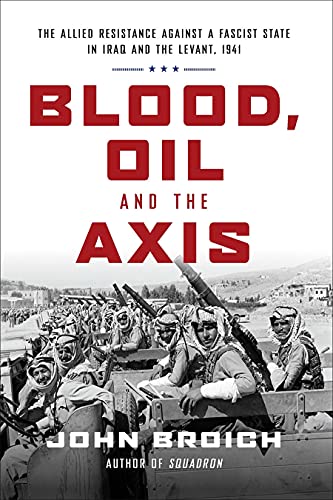 “a campaign that plays out like a John le Carré novel . . .”

Many Americans are familiar with the names Baghdad, Basra, and Ramadi since they have been in the news constantly for nearly 15 years. But these locations were also in the news in 1941 as World War II raged across Europe, North Africa, and the Middle East. In this new book, the almost unheard of story of actual conflict over Middle Eastern oil supplies is brought to life with a cast of colorful characters, intrigue, and shoe-string military operations as both the Allies and Axis seek control over this vital region of the world.

As 1941 opened Britain was on the defensive and reeling from a series of defeats. Not only had Germany conquered most of Western Europe, but that spring a blitzkrieg of panzers and airpower had overrun Yugoslavia and Greece, and once more a British Expeditionary Force was ejected from the continent. More dangerous from a strategic perspective, the newly formed German Afrika Korps and its daring commander, Erwin Rommel, who had pushed a British army out of Libya and into Egypt, threatening the Suez Canal, the vital link between Britain and its empire in the Far East.

As Britain was struggling to find troops and materiel to meet not only the German juggernaut but a rising Japanese threat, a group of pro-Axis Iraqi Army officers threw the entire Middle East into turmoil. Overthrowing the pro-Allied Iraqi monarchy, these officers dreamed of a pan-Arab state supported by German airpower and weapons, perhaps encompassing the modern states of Iraq, Syria, and Lebanon.

Fortunately for the British, the Germans were indifferent to these overtures and never really saw the strategic potential of a Pan-Arab army that could cut off Britain’s oil lifeline, provide an uninterrupted supply of oil to the Axis war machine, and provide additional leverage to potentially bring Turkey into the war on the Axis side.

However, even though the British quickly recognized the existential threat to their war effort, they could only muster a scratch force of polyglot troops that included Australians, British, Free French, Indian, Arab, and Jewish forces that were almost always outnumbered and outgunned by their opponents.

This makes the story even more remarkable as the author weaves together an account of how these forces defeated the pro-Axis forces in Iraq through steadfast courage, more than a little luck, and what today would be called a concerted information operation campaign that used a lot of bluffing and bluster to convince the Iraqis the British forces were stronger than they were, causing them to abandon several excellent defensive positions at the first exchange of fire. As the British closed in on Baghdad, the pro-Allied regent led government was restored and the threat to British oil sources eliminated.

Syria was a tougher nut to crack as it was controlled by Vichy French forces loyal to the collaborationist French government of Marshal Petain. Politics and diplomacy played a significant role in this campaign as General de Gaulle’s Free French forces tried unsuccessfully to get their Vichy countrymen to come over to the Allied side. When most of these troops refused, a strange sort of civil war occurred as Vichy French troops fought Allied and Free French troops that invaded Syria and Lebanon in June 1941 to secure the vital ports, airfields, and oil terminals in the country.

The Vichy French troops fought tenaciously at first, supported by superior air power and a significant set of defensive positions on the known invasion routes into the country. The Allied attacks toward Beirut and Damascus quickly stalled, and there was a real possibility the Vichy forces could have defeated the invaders.  Only the diversion of a significant portion of the Allied forces in Iraq and reinforcements of air and naval power allowed the Allies to resume the offensive and secure an armistice with the Vichy French commander.

By the late summer of 1941 Iraq, Syria, Lebanon, and the vital overland oil pipelines were secure. More importantly, the lines of communications between Britain and India were secure as well, since Indian forces did a significant portion of the fighting in Iraq and Syria.

The 1941 campaigns in Iraq and Syria are almost totally forgotten in World War II history, overshadowed by the legend of the Desert Fox and the German invasion of Russia in the middle of the fighting for the approaches to Damascus. But this book does an excellent job of interlacing the story of a campaign that plays out like a John le Carré novel, with dashing provocateurs, daring soldiers, and covert operatives all mixed into a brew of Arab nationalism and French dismay at having to repel what they considered Allied invaders.