Blood, Metal and Dust: The Wars in Afghanistan and Iraq 2001–14, A Military History 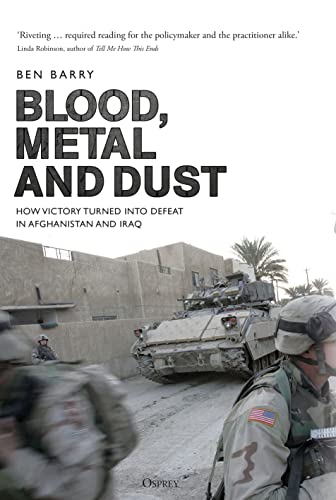 “Reminiscent of the many great narrative histories of Allied military operations during World War II, this book is absolutely a must read on these wars.”

Osprey Publishing has at last provided the one-volume history of the campaigns in Iraq and Afghanistan that readers have been long awaiting. Concise, well-written, and insightful, this is by far the best history of the last 20 years of conflict in these countries.

The author, using both his military experience and background as a Senior Fellow at the International Institute for Strategic Studies, takes the reader chronologically through these conflicts, from the first insertion of Special Forces into Afghanistan in 2001 to the current state of affairs in both countries as the United States considers its future involvement in these conflicts.

The book really stands out for a couple of reasons. First, readers of traditional narrative military history will find all of the major phases of operations in each country well covered, from the initial fall of the Taliban, to the furious march to Baghdad in 2003, the Iraq insurgency and surge, to the Afghan surge and subsequent stalemate in that country. Through it all the author provides just enough detail without getting lost in the tactical minutiae to keep the pace moving and explaining the operational and strategic outcome of each phase of the war in the respective country. More importantly, this book has sufficient maps in just the right detail to support the narrative the author is presenting, something that is often lacking in military campaign histories.

Second, because the author is British, and not American, he brings a unique analysis of the various campaigns that may be surprising to readers accustomed to the recent wave of personal memoirs or unit histories beginning to emerge on these wars.

In particular, the author highlights the significant and sometimes overlooked role that NATO played in the Afghanistan War, particularly those crucial years from 2005–2009 when American attention was almost solely focused on the war in Iraq. The chapter describing the heavy combat operations undertaken by the British military in Helmand Province and the Canadian military in Kandahar Province during 2006–2007 may come as a complete surprise to many readers, particularly as both operations were conducted as “economy of force” operations without the lavish air power and other tactical support enjoyed by US forces operating in Iraq at the time. Indeed, one of the points the author continually makes is that both campaigns were typically under resourced for the corresponding strategic and political goals, since assets such as airpower, aerial unmanned vehicles, and the always critical special operations forces were continually stretched thin in both theaters.

The author is also unsparing in his criticisms of both countries’ military and political leadership during the campaigns, as their inability to grasp the cultural and political landscape in both countries led to disastrous planning assumptions and operational decisions that nearly ended in strategic defeat for both American and Britain. Even so, he makes a compelling case that in the long-term Iran may emerge as the major beneficiary of the Iraq War, and the jury is still out on what will happen in Afghanistan when American troops inevitably leave. His reproach is particularly severe for his own government for their lack of strategic reality about what kind of wars they were asking British troops to fight and what tools they were willing to use to achieve their goals.

History students, military officers, and other strategic thinkers will find this volume both enlightening and thought provoking. Written with an eye to both the casual and serious student of this conflict, the author also provides an excellent bibliography and notes section that takes full advantage of the large amount of source material available on the internet for deeper study. Reminiscent of the many great narrative histories of Allied military operations during World War II, this book is absolutely a must read on these wars.