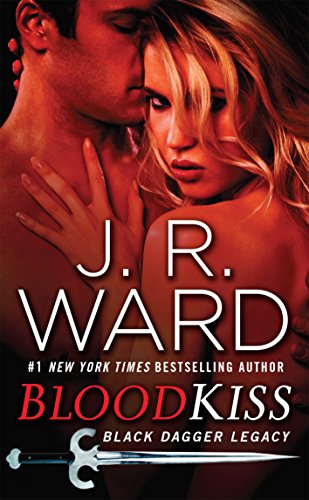 “Blood Kiss is the work of a writer who is a master of her genre.”

“she thought about what happily-ever-afters were about, and decided that true love didn’t mean effortless, and ever-after wasn’t about cruise control.”

Paradise, aristocratic daughter of First Advisor to the King, has decided that the demands of her class and sex are constraints that she no longer will endure. In a quest to find her meaning in her life, she joins an elite team of vampires to train as a soldier and protector of her race. The training is incredibly difficult, the Brotherhood is not prepared to grant her quarter because of her society status, and then there is the matter of her overwhelming attraction to another member of the training class. A commoner.

When a violent death becomes the focus of the Black Dagger Brotherhood (BDB), Paradise is tested physically and mentally, and she’s not the only one. The Brother in charge of the class, Dhestroyer, is having problems of his own, and the murder brings them to a head.

Ward’s training sequences and fights are fast paced and believable; she apparently knows what a real fight looks like, and uses that to inform the action of her characters. Despite being supernaturally strong beings, their movements are firmly grounded in earthly possibility and subject to natural laws. This is a rarity in paranormal fiction in general, and in romantic fiction specifically. Her BDB might be strong, but they are not invincible, and the down and dirty fights are presented so vividly that the reader can easily get caught up in the action.

Sex scenes are similarly graphic. Ward has a lovely touch with her erotica: while she does not shy away from detailed descriptions of sexual acts, she has the good judgment not to make them repetitive, and does not go on so long that they become clinical rather than sensual. Her characters’ encounters are passionate and dirty, but ultimately loving.

Paradise is a heroine on par with the rest of the strong women of the BDB. She’s a young woman pushing against boundaries, and in her struggle Ward takes subtle digs at the walls modern, non-vampiric, women must often scale: job parity, social expectations, the virgin/whore dichotomy that comes paramount in so many modern movies and books. Paradise is strong, funny, and determined to make her own way in the world, even if that means disappointing her aristocratic father in her choice of mate.

Dhestroyer’s mate, Marissa, is equally as strong, and facing many of the same barriers as Paradise. An older, married couple, she and Dhestroyer (or Butch) are a foil for Paradise and Craeg’s new love. In them, one possible future and set of issues for the young couple is presented, and how they deal with those issues is important to Ward’s overall message of the strength in a true bond between a couple.

This book breathes new blood into a series that has been bogged down in the last few novels by labyrinthine plotting and murky secondary stories. The action is fast and hot here, and terribly funny. Again, real humor (not just sexually suggestive dialogue) is not a hallmark of paranormal erotica, but Ward’s characters are wickedly funny at times, poking fun at lifestyles, familial relationships, and everyday life. The sequence where the vampire wives settle down to watch Magic Mike II is not to be missed, and her use of the fallen angel, Lassiter, is very funny.

The denouement, when it comes, isn’t really a surprise, but that’s not the point here. Ward seems to be having fun with her characters for the first time in several years. They are each interesting individuals, no cookie-cutter romantic heroes or heroines here. Ward has found the sweet spot between dreamy and gritty, leaving characters that are, though vampiric, completely human and sympathetic. She wraps her package in dialogue that is natural, humorous, passionate, and ultimately wonderful.

Blood Kiss is the work of a writer who is a master of her genre. There is an ease in Ward’s writing style, a conversational tone, that makes her characters relatable and keeps them floating around in readers’ minds long after the book is closed. These are most definitely “adult” novels: sex and violence abound, but Ward’s talented use of language and knowledge of where to cut a scene keeps them out of the range of pornography. The Brothers are foul-mouthed, but Ward’s ability to create and flesh out realistic characters makes the language feel like an intrinsic part of the characters rather than a play to shock, or even titillate, readers.

It’s good to see the Brothers back, and even better to have a future of new stories about their trainees ahead. There couldn’t be a better read for an escape from Christmas chaos than J. R. Ward’s Blood Kiss.