The Blood: A Jem Flockhart Mystery 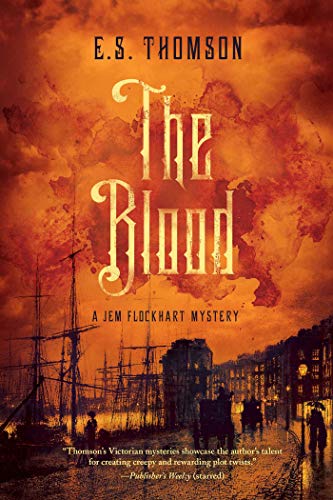 “The Blood is a tale giving a view of what Victorian London was really like, not the prim and proper showcase of a public television set, but a callous and heartless venue where society was broken into immutable classes and death was the only equalizer.”

Jem Flockhart is unique in the apothecary profession, a woman disguised as a man, thus enabling her to succeed in a profession where females would generally be ignored.

“My father dressed me as a boy. He had passed me off as his son from the moment of my birth, condemning me to a life of disguise. It was the only life I knew and I lived it as best I could.”

Their first hint of anything out of the ordinary comes when Jem accompanied friend Will Quartermain to an abandoned building he’s been hired to redesign and restore. A woman’s body is found floating in a culvert called Deadman’s Basin.

The person identifying the body as Mary Mercer, a street girl, declares she’s been murdered. After examining the body, Jem agrees.

“The corpses of men find their way into the river by accident. Women’s arrive there by design.”

When she receives a frantic note from John Aberlady, apothecary aboard the floating hospital, the ship nicknamed The Blood, it’s too late. Aberlady has thrown himself into the river and drowned.

“I had not realized my old friend had sunk so low. Laudanum was one thing, but an opium den? Such places were dangerous, filthy caverns frequented by wretched, lost souls.”

Jem arranges to take Aberlady’s place as apothecary on The Blood. Soon, she and Will are exposed to the pettiness and jealousies among the doctors, the squalor and hopeless illnesses of the patients onboard the boat, and pseudo-benevolence hiding nefarious goings-on at a home for the rehabilitation of “fallen” women.

“One step away from the workhouse, the docks were the only place where a man’s character or his past were of concern to no one.”

Their search for the truths of the deaths will stretch from the holds of The Blood to London’s brothels where lives are ruined, those who survive are more wretched than the dead, and the poison from a small South American amphibian can cause more death than the opium dens combined.

This novel is as full of history as it is of mystery, with a set of characters as interesting as one could wish to find. With a protagonist named Jem who is addressed as “Mr. Flockhart” by one and all, and later revealed to be a woman, how can the cast not be unique?

Raised as a man to thrive in a man’s world, Jem’s gender isn’t at first revealed, and the reader, unless having read previous novels, will be well into the first chapter with no hint beforehand when that revelation is made.

Little is given of her background, other than that her father was arrested and condemned for a crime he didn’t commit and she is longing for and seeking a vanished lover. Her diatribe on being a woman in Victorian times, while too lengthy to reproduce here, is definitely contemporary in its emotion. It’s also not noted whether friend Will is aware of Jem’s disguised gender. Though Jem knows he loves her, and Will confirms this, she later states she isn’t certain he knows she’s a woman. Will’s actual preferences, however, are never commented upon.

Will himself is definitely the more sensitive of the two. In a superb role-reversal, when faced with the squalor of the illnesses within the floating hospital’s wards, or the unpleasantness of an autopsy, he’s liable to lose his breakfast or faint, while Jem is remarkably resilient. Through most incidents in the story, their roles, as far as sensibilities and weaknesses are concerned are switched, often to either faint derision or comic effect.

“Mr. Quarterman?” He slapped Will’s face, reaching for the salts.

“He’ll be well in a moment,” I said. I did not want to leave my task to see to Will. I knew he would revive in a moment or two. He was always fainting, always being fussed over by others; he didn’t need mollycoddling.”

When it comes to determination however, the two are equal to the task, whether it’s carrying through on their investigation into the deaths, venturing into an opium den, or mixing the compounds necessary to run Jem’s apothecary shop.

There’s a great deal of history brought to light, both in the actions of the doctors aboard the floating hospital, with their dosing of the prisoners with dubious remedies that invariably don’t work, as well as their squabbling over the corpses pulled from the river, and destined for someone’s anatomy classes.

Against this background, Jem’s disguise and her search for her missing lover becomes a mere footnote, with the “confessions” of the girls taken to the recovery house providing interesting asides as to what a woman had to go through in order to become “respectable” again.

The Blood is a tale giving a view of what Victorian London was really like, not the prim and proper showcase of a public television set, but a callous and heartless venue where society was broken into immutable classes and death was the only equalizer.