The Blood of Heaven 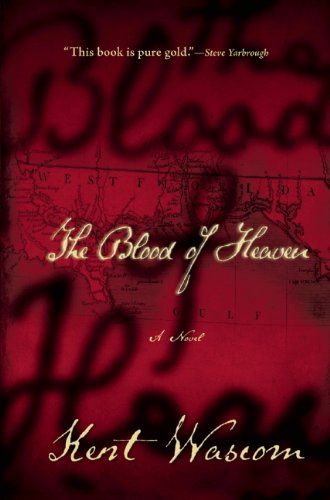 It’s a hard life in the borderlands of West Florida, circa 1800. Folks are so poor they live in hovels that are half house, half ditch in the dirt. Torrential rains, miasmic heat, and bugs turn the air itself into a festering soup. And nobody ever quite knows who’s in charge.

The Spanish rule this part of the world . . . or claim to. A treaty from 1763 gives them a strip of land that runs along the Gulf Coast from Florida to New Orleans, then north into the heart of the continent.

But opportunistic Americans are pushing south, looking to take what they can where they can. And the Spanish have secretly ceded their holdings to the French. And the French will soon surprise everyone by selling most of it to the Americans.

So it’s a world where change is remaking the landscape. And as Kent Wascom demonstrates in The Blood of Heaven, his big, ambitious, first novel, shifting ground is fertile ground for a storyteller.

Mr. Wascom introduces Angel Woolsack as narrator and central character. Angel tells us, “I came from nothing, from damn near nowhere, and moved across this nation piecemeal before it was ever born.” He narrates from old age, as Secession is tearing the nation apart. But his story is from his youth, and in its broadest contours, it’s a familiar one. A boy comes of age after youthful transgression, rebellion, and confrontation with violence, and finally gains a hard education in the ways of the world.

At 14, Angel travels south down the tributaries of the Mississippi with his father, an itinerant preacher so unloving that he punishes his son for “bad word or bad deed” by making him chew on a hot coal. And the father’s question after the boy has burned his mouth and learned his lesson: “Do you taste the Hell in there?”

No surprise that Angel will eventually kill his father with a shovel. No surprise that in a novel about men who preach the word of the Lord but seldom live by it, Angel will become one of the best and most hypocritical preachers of them all. And no surprise that the Lord he carries in his heart is not the forgiving Jesus of the New Testament but the stern and violent God of the Old.

As Angel says early on, his last name “means Death in Scots talk.” Death indeed. The freedom that Angel and those around him will pursue is won through eye-for-eye vengeance, killing, and finally, the enslavement of others. The heaven on earth they seek, a world they will carve out of the bayous and riverbanks along the Mississippi, will be washed in blood again and again.

So make no mistake. This is a violent novel. It’s dark, too.

And in dark places, intrigues of grow. The book begins as a kind of picaresque. Angel and his adopted brother, Samuel, flee the patricidal murder scene and head south to find their third brother, Reuben. They have adventures. They meet interesting characters, some who help them, some who love them, some who try to kill them. And it seems for a time that they will meander for all four hundred and seventy-two pages.

Then . . . enter Aaron Burr, former Vice President, killer of Alexander Hamilton, ambitious intriguer, an American scoundrel if ever there was one. And the plot tightens. Has Burr come to carve a new nation out of this Louisiana Purchase? What will it look like? Who will follow him? And who will benefit?

Angel will hitch his ambitions to Burr. His brothers will turn against him. Their neighbors and political rivals will choose sides based on the oldest human question: what’s in it for me? There will be blood. Lots of it. As the ambush scenes, shootings, stabbings, and other atrocities unfold, Angel comes to realize that he can trust only one person, Red Kate.

She’s the Irish girl he meets in a bordello and marries. She sticks by him during all the fighting. She even packs a brace of pistols and fights beside him when she has to. And she bears him a son who turns out to be the saddest character in the novel, a powerful symbol of the fruits of violence and ignorance.

So Kent Wascom is working fertile dramatic ground, yes. But too much fertility is not always a good thing. Sometimes too much grows. Sometimes a little weeding would help. And that’s how this novel often feels.

Though he’s not yet 30, Mr. Wascom has the gift, the elusive “it” that tells you on the first page that here is someone worth reading. He’s no 20-something hamstrung by the hundred-and-forty-character mindset of his generation. He likes words. He likes their sound, their flow, and the way they create emotion out of imagery.

In one scene, Angel kills a man in his barnyard. The man’s wife shoots at Angel and misses. She tries to reload. She’s not very good at it. “She knelt among the squealing pigs, trying to pour powder and shot into the barrel of a musket, wind whipping the black grain from her shaking hands.”

In a single sentence, he captures the woman’s fury and futility at the same time.

But Mr. Wascom may like words a bit too much. Angel Woolsack may be an avenging angel, but laconic he’s not. In almost every paragraph, he has to offer one more detail, one more image, one more bit of business. And this fecundity extends to the cast as well.

Mr. Wascom has created a strong group of central characters—Angel, Red Kate, brothers Samuel and Reuben—to play against a wide circle of neighbors and rivals. But when the bullets start to fly, it’s sometimes hard to keep track of all the antagonists and the transgressions that have brought avenging Angel to their doors.

Having a too much of almost everything, however, is better than having too little. In time, Mr. Wascom will develop the delicate sense of what to leave out. He will also come to understand what he has to put in.

That would include quotation marks. You have probably read a novel or two in which the author has decided, for whatever meta-fictional reason, that quotation marks aren’t necessary. But The Blood of Heaven is a traditional novel in the best sense. It has narrative structure, forward momentum, characters who engage us as they evolve. In its best moments, and there are many, you will slip completely into Wascom’s fictional world.

So there is nothing meta about this book, no reason for the author and the reader to be winking at the each other and saying, “We get it. No one really said these things. This is all made up, all fake stories set in a real world.”

So why no quotation marks? Why make the reader work on every single page to figure out who’s talking? Is it the narrator? Is it Red Kate? Samuel? Oh, wait, there’s a “he said” dropped into the sentence, so we are reading dialogue here, so . . .

You may grow so frustrated with this affectation of punctuation that you’re tempted to stop reading. But don’t quit. The Blood of Heaven is worth the work.
If it strikes you as a bit too inflated, if you feel that Angel goes on a bit too long about almost everything, if you find that the world he inhabits is unrelentingly dark, all blood and no hope, charge it to the author’s youth or to the narrator’s bitter awareness of original sin.

You will also be in the presence of a young writer whose talent is obvious, whose sense of narrative is classical and clear, whose understanding of the craft is deep and well formed and will only get better. Pray that his view of human nature improves, too.

William Martin is the award-winning New York Times bestselling author of ten novels, a PBS documentary, book reviews, magazine articles, and a cult-classic horror movie. He was the 2005 recipient of the prestigious New England Book Award, given to an author “whose body of work stands as a significant contribution to the culture of the region.”