The Blood Gospel: The Order of the Sanguines Series 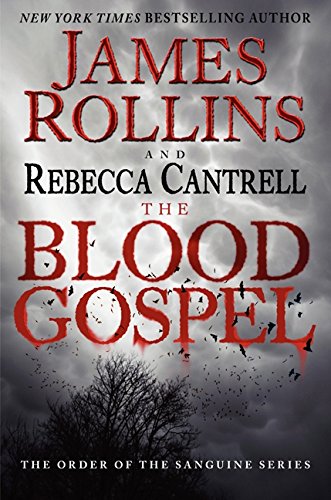 “. . . a thriller of dark subterranean complexity, rather like a rare, vintage red wine.”

The Blood Gospel is a rip-roaring good adventure that combines the headlong pace of Indiana Jones with the religious convolutions of The Da Vinci Code.

James Rollins teams up with a co-author for the first time, combining forces with Rebecca Cantrell, a well-respected mystery writer. All the signature Rollins touches are present—exotic foreign locales, high stakes action scenes, unnatural creatures, and a compellingly twisty plotline—while there is a new richness to the descriptive passages and more layering in the character interactions. Mr. Rollins and Ms. Cantrell seem to be a writing match made in heaven.

When an earthquake splits open the ancient fortress mountain of Masada, three people are brought together by the machinations of the Catholic Church. Doctor Erin Granger is a notable archaeologist and a beautiful young woman who has deeply ingrained issues with the church. Sergeant Jordan Stone of the Ninth Ranger Battalion was pulled out of Afghanistan and brought to the disaster site without explanation. The Vatican itself sends Father Rhun Korza, ostensibly to recover a cardinal’s nephew from the catastrophe.

Unbeknownst to the three they may fulfill an ancient prophecy demanding a Woman of Learning, a Warrior of Man, and a Knight of Christ.

When the trio descends into the damaged mountain to discover the source of a lethal gas, they find a manmade chamber uncovered by the earthquake. Father Korza realizes it once held an immensely powerful artifact, a Gospel written by Christ himself, now gone, apparently stolen by the Nazis.

After battling for their lives to escape this first onslaught, Erin, Jordan and Rhun are recruited by the Catholic Church to find the Blood Gospel before the strigoi do. The leader of the strigoi forces is a stunning redhead named Bathory Darabont who reluctantly answers to a mysterious master. She and Rhun have a connection from their past so the enmity between them becomes intensely personal.

In addition to the various strata of strigoi, Mr. Rollins gives us blasphemares, giant creatures tainted with strigoi blood to give them heightened strength and senses. Bathory’s blasphemares are grimwolves, whom she was bonded with as pups.

Some of the most heart-wrenching scenes in the book occur between Bathory and her deadly canine companions, evoking an almost shocking sympathy for a wicked, violent villainess.

While the quest pits the forces of good against those of evil, Mr. Rollins and Ms. Cantrell skillfully engage the reader with the characters as individuals. Erin and Jordan both have personal histories that complicate the relationship growing between them, adding a human dimension to the grander conflicts they are immersed in. Erin’s childhood sets her at odds with the dogma of the church she finds herself assisting. Finally, there is the history between Rhun and Bathory to ground their epic struggle in human emotion.

The settings come alive with color, scent and atmosphere. When the three protagonists descend inside the mountain, the reader feels the bulk of the dangerously unstable mountain weighing on them. The sense of ancientness and blood spilled long ago is palpable. The scent of cinnamon swirls in the deadly gas. The climactic scene of the book evokes a landmark so well-known, the reader shivers in horror when it is desecrated.

The central motifs of the book are blood and wine, both real and symbolic. Vampires feed on blood, but so do Catholic believers when they drink the transubstantiated wine of the Mass. The authors use this theme to connect vampire and priest and to speculate on how various church traditions arose. Readers of a strongly religious inclination may be offended by these flights of conjecture.

The Blood Gospel is the first in a series The Order of the Sanguines so the ending answers some questions while asking new ones to hook the reader into the next installment; however, this does not make the reading experience any less entertaining or satisfying.

While The Blood Gospel is more mystical than Mr. Rollins’ previous novels, his fans should enjoy the extra dimensions of religious themes and supernatural beings.

These elements are handled with the same skill as the author’s “scientific” stories. The reader is still immersed in the action as clues are unraveled, battles fought, conspiracies formed, and histories revealed. This is a thriller of dark subterranean complexity, rather like a rare, vintage red wine.

Award-winning author Nancy Herkness is a novelist and poet, as well as an inveterate reader of international thrillers. Her most recent book is Take Me Home.