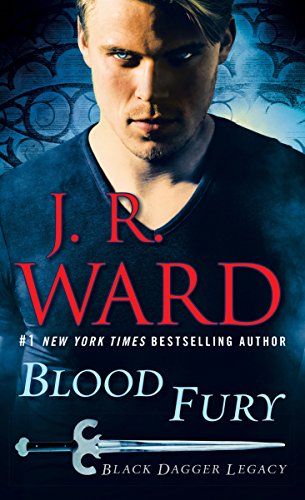 “It is no accident that J. R. Ward’s series are beloved. She is a master writer.”

How many spinoffs of popular series meet or surpass expectations set by the original? Not many. For every Frasier, there are at least 3 Joanie Loves Chachi-level disappointments. It’s difficult to take a secondary character, which by their nature and construction are supposed to support main characters, and flesh them into whole, well-rounded center-stagers in their own right.

It’s lucky, then, for the characters in J. R. Ward’s new Black Dagger Legacy (BDL) series that she is a master craftsman. The first two books in this new series were strong, but Ward truly hits her stride in the latest installment, Blood Fury. It is to be expected that Ward would couple two of BDL’s new protectors, and she does so: Dissipated aristocrat, Peyton, imagines himself to be pining for glamour queen Paradise (herself coupled off in Blood Kiss, the first of this series); however, when rough-edged, wiry Novo is injured in battle, Peyton can’t keep his mind off of her or himself away from her side.

Less expected is when the vampire king’s trusted and competent attorney, Saxton, finds himself powerfully attracted to newcomer Ruhn, the long-lost uncle of another character in this popular series. Though a throwback to a storyline begun in the main series could be seen as a sort of cheat in this new world, Ward carries it off with aplomb by letting the “new” story take the lead.

The Black Dagger Brotherhood (BDB) stories are a mainstay of American paranormal fiction, and it isn’t by chance or strictly because of the sexual content of Ward’s books in this series. The amount and detail of such varies from book to book, and though it is invariably well-written, it is Ward’s ability to write action scenes and believable dialogue that take her books to the next level.

Her characters generally begin as stereotypical tough guys (aside from the vampire aspect, which is honestly extraneous at this point), but gradually reveal layers of vulnerability and humor that make them human and relatable.

Peyton and Novo are no exception to this rule. Peyton especially benefits from having been introduced in earlier novels; continuing readers will be gratified to see how he changes and grows from novel to novel. Readers who start with this book will not be left out in the dark, either—Ward does a nice job of summarizing in quick interior monologue and revelatory dialogue what a reader needs to know about these characters and their pasts.

Ward knows how to write these scenes in a manner that is neither pedantic nor rote—she encapsulates what a reader needs to know in bright dialogue and often has the characters use self-deprecating humor to get the information across in an interesting manner. The ability to use dialogue and vivid imagery is one of Ward’s biggest strengths: “Dimly, [Peyton] wondered if [Paradise] was going to say his name like that for the rest of their lives. Like it was a sob with syllables.”

Blood Fury is refreshing in that its characters act like actual adults. Though the vampire aspect is fantastic, their personal interactions are completely age-appropriate and believable. No misunderstanding tropes that stretch believability by being carried through a whole book.

When Novo hears something upsetting from Peyton’s father, she asks Peyton about it fairly quickly. When Peyton says something to Paradise that leaves him vulnerable, she approaches him right away, and they deal with the matter right away.

No human (well, vampire) doormats populate this story, either: When one character treats another badly, that character has the self-respect to say “no” and calmly walk away. And when apologies are in order, they are made in plain language and with sincerity. These story aspects are regrettably unusual in American romance.

Unusual, too, is Ward’s playful humor. It manifests not in obvious jokes, but in the aforementioned self-deprecating humor and casual asides that read as real life lightness, even in dire circumstances. In that sense, Ward’s characters are some of the most “human” in romance today. When coupled with her ability to write action scenes that jump off the page with their realism, that makes Ward a powerhouse writer.

The secondary couple in this book, though more low key than Peyton and Novo, are just as important. Saxton and Ruhn’s relationship is handled with a sensitivity that will not be a surprise to Ward’s long time readers—Lover at Last and The Chosen both dealt with homosexual couples. Ward does not shy away from discussions about homophobia, pride, exploration, and fear. Though she also does not shy away from the sexual aspect of either relationship, it is clear that she is more interested in portraying relationships than writing a sex manual.

Both couples in the story reflect diversity in socioeconomic backgrounds—not unusual in romance. What is not so common is that the “richer” partner is not automatically either callous or dismissive of their partner, the “poorer” partner is not juvenilized by overreliance on the richer partner, and neither partner in either relationship is subtly coded as the good or bad person because of their economic status.

The skittish reader should be aware that Blood Fury is a jump back to earl BDB novels in terms of sexual content. Though each novel has its fair share, it is low key in some of the later BDB and BDL novels. Blood Fury amps up the caliente factor with some rough sex, including one scene that skates the border of sex and violence in a manner that could disturb some readers.

Blood Fury is a satisfying walk down BDB memory lane, both in Ward’s use of established characters and storylines and in the more upfront sexual content. It is also a refreshingly new type of romance that, even within the massive vampire trope, allows its characters to reflect the real-life behaviors humans should aspire to: self-respect, self-awareness, honesty, and a large measure of humor. It is no accident that J. R. Ward’s series are beloved. She is a master writer.