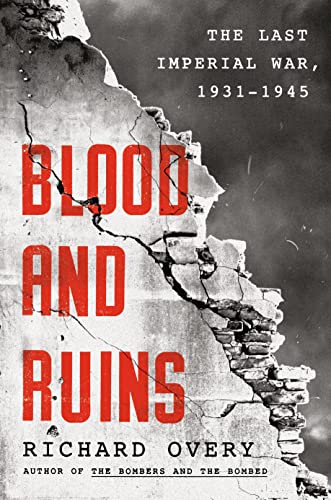 “Blood and Ruins: The Last Imperial War, 1931–1945 stands apart for its unique observations and analysis of the war, focusing much more on both its origins and effects while scrutinizing many under investigated aspects of its conduct.”

Beginning with a background of European colonialism, which reached its peak in the late 19th and early 20th centuries, he examines the background of the war as an effort of three rising powers with imperial aspirations—Germany, Italy, and Japan—to replace the global British and French Empires. The actions of Japan in conquering Manchuria in 1931, the date Overy selects as the beginning of the imperial war that become a world war, as well as the actions of Italy to conquer Ethiopia in 1935, and Germany in central Europe leading up to the invasion of Poland in 1939 are placed in the context of each country’s desire to gain land, people, and resources to economically enrich themselves and create a new global order.

Overy offers original insights into the colonial policies of each Axis power and how they tried to establish political control and conduct economic exploitation of their new conquests, with minimal success in most cases. The promise of empire did not quite meet the expectations of the Axis powers and although Germany and Japan conquered vast parts of Europe and Asia, the economic benefit never quite matched the costs of first acquiring, and then maintaining their conquests.

Moreover, the author shows the contradiction of the Allied powers to professing to fight for freedom and democracy while maintaining their empires. In particular, the strong desire of Winston Churchill to maintain the British Empire put him on a collision course with both Roosevelt and Stalin, who each had their own reason for desiring the end of empires and the notion of national independence for burgeoning countries. This tension actually affected Allied war strategy, as the American military leadership was universally skeptical of Churchill's desire to commit heavy resources to a primarily Mediterranean strategy and nearly broke with the British over their overarching “Germany First” policy until Churchill relented and reluctantly supported the American desire to attack across the English Channel to take the war straight to Germany.

The traditional topics of military strategy and technology also receive a thorough review as the author examines the development of air power, armored warfare, the rise of the aircraft carrier and submarine in naval combat, and the critical development of amphibious warfare that made the eventual victory of the Allies possible as they had to launch a furious counterattack across vast maritime distances to drive back the early advances of the Germans and Japanese. The battle narratives are sharp and well-written as the author weaves these traditional staples of World War II history into his overall thesis of imperial ambitions met and unmet.

However, unlike in many traditional single-volume histories, Overy goes down the neglected path of the darker side of the war, examining the numerous atrocities committed on civilians, especially women, by both sides, and he does not stint on his criticism of Stalin’s regime and their aggression and brutalities on German civilians as the Red Army sweeps into Germany, raping and killing in a state-sponsored revenge against earlier Nazi barbarisms. He also offers some fascinating new statistics on the economic mobilization and impact of the war on the major combatant’s economies and offers many contrarian viewpoints on race and gender relations among the Allies that do not always fit the traditional notion of World War II as “The Good War.”

Finally, and this is where his analysis really comes to fruition, Overy examines the fallout of the war and the chain of events that eventually lead to the end of both the British and French empires even as the Soviet Union and soon Communist China begin to build their own de facto empires within the escalating Cold War.

Other histories have discussed how the humiliating defeats of Britain and France by Germany and Japan in the early years of the war led to the rise of nationalist movements in major parts of their empires, especially India for Britain and Indochina for France, but the author places these events into their proper context within the beginning of both the United Nations and the Cold War, and even foreshadows some of the major conflicts to come, particularly Korea and Vietnam, through his theory of World War II as the last imperial war.

Although there have been some splendid recent single-volume histories of this war, most notably by Andrew Roberts and Sir Max Hastings, Blood and Ruins: The Last Imperial War, 1931–1945 stands apart for its unique observations and analysis of the war, focusing much more on both its origins and effects while scrutinizing many under investigated aspects of its conduct. Although it is a mighty tome at over 800 pages of narrative, even for the most ardent student of the war, it offers a fresh perspective that makes it well worth the investment.