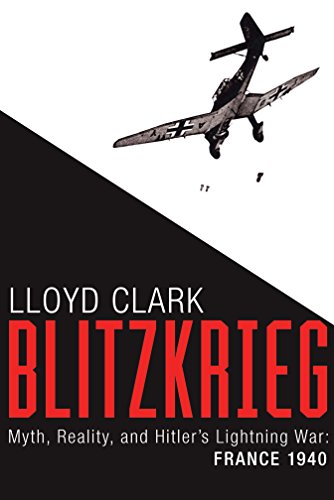 Technology played some part in the 1940 campaign, but the more decisive edge for the Germans was training, tactics, and the spirit of Auftragstaktik. . . .

The German defeat of France in May 1940 stunned the world. In less than six weeks, the newly mechanized and seemingly unstoppable German Wehrmacht had vanquished four different armies and ruled all of Western Europe. The vision of German Panzers rolling over their hapless foes as waves of Stuka dive bombers rain down destruction remains an enduring image of the early years of World War II.

In this new volume, acclaimed historian Lloyd Clark takes a more critical look at this campaign and in this new analysis, paints a very different look at the German victory, noting their ultimate triumph was brought about not exclusively by technology, but a potent mixture of weapons, doctrine, training, and a way of war that was uniquely German, but hardly revolutionary.

The bloody stalemate of World War I trench warfare both traumatized and shaped the strategic thinking of European armies during the inter-war period.   Although there was a tremendous change in military technology with the rapid improvement to tanks and airplanes during this period, the countries of Europe had very different visions for using these improved weapons of war.

Germany was determined to restore the battlefield mobility that had been lost to trenches, barbed wire, and machine guns in order to quickly secure a decisive victory. German generals were very aware that a long attritional war favored their enemies and sought to use firepower, maneuver, and an attack on their enemy’s command and control capability to quickly crush their enemies.

France drew entirely different conclusions. Suffering huge casualties at battles like Verdun, the French assumed both a strategic and tactical defensive posture, sinking huge resources into the ultimately useless Maginot Line and essentially retaining their World War I doctrine of fixed defenses, massive artillery firepower, and a very centralized command structure in an attempt to minimize casualties while fighting a defensive campaign.

As the planning for the Western campaign begins in earnest shortly after the defeat of Poland, Clark describes several “paths not taken” that could have easily changed the entire course of the war. The original German planning was no more imaginative than the French, merely a mechanized version of the failed Schlieffen Plan of 1914.

However, under enormous pressure from Hitler to come up with a more decisive plan, and prodded by Panzer enthusiasts within their ranks, the German High Command finally came up with an extremely risky plan that not only pushed the limits of the Wehrmacht’s capability, but in large part would only succeed if the Allied powers of France, Britain, Belgium, and Holland reacted precisely as the Germans expected.

Fortunately for the Germans, once the campaign begins with an attack into Belgium and Holland on May 10, 1940, the Allies did almost exactly what the Germans expected. As the secondary German force poured into the Low Countries, the majority of the French Army and British Expeditionary Force (BEF)  moved into Belgium in a virtual repeat of the 1914 opening campaign.

But then the Germans launched their main effort through the seemingly impenetrable woods of the Ardennes Forest to launch the decisive attack behind these Allied armies, threatening to encircle and destroy the cream of France’s Army and the entire BEF.

Clark does an excellent job of describing the first critical five days of the campaign, when the Germans had their toughest fighting as they pushed several Panzer Divisions through tough terrain in order to break out into good tank country and race for the English Channel. He highlights multiple opportunities the French and British had to stop the German advance at vulnerable moments, especially the German crossing of the Meuse River at the city of Sedan, the linchpin of the entire offensive.

If the French, whom Clark noted had superior tanks to the Germans, had concentrated their tanks into combined arms divisions as the Germans had, instead of dividing them up as infantry support weapons, there were multiple occasions where they could have seriously disrupted or even stopped the German advance.

But the German generals, given far more latitude to make operational decisions than their French counterparts, reacted with speed, decisiveness, and the willingness to accept extraordinary risks to achieve their breakthrough and prove the worth of the Panzer Divisions. Legendary German commanders like Heinz Guderian, Erwin Rommel, and Erich von Manstein reached their first great heights of fame in this campaign, outthinking and outfighting their French counterparts at nearly every turn.

Ironically, the German’s own fears stopped them from securing a more decisive and war-winning victory by trapping and capturing the BEF, then Britain’s only real army and potential defense force against a German invasion. The Germans feared a nonexistent French counterattack into their long and vulnerable flanks that never materialized as the French Army was defeated both morally and physically by the time the German Army reached the English Channel. If Hitler and his high command had allowed the Panzers to drive into the rear of the Allied forces and capture the Channel ports, the miracle of Dunkirk would have never happened.

Lloyd presents a well-balanced narrative that highlights the knife edge victory of the German forces. Technology played some part in the 1940 campaign, but the more decisive edge for the Germans was training, tactics, and the spirit of Auftragstaktik, or mission orders, that allowed generals like Rommel and Guderian to keep the offensive momentum going in spite of the fears of their superiors.

However, in his postscript, Lloyd also notes that although the Wehrmacht had decisively changed the operational way of war forever, ultimately, prowess on the battlefield had to translate into strategic victory, and here the German military was to finally fall short.