Blitzkrieg: From the Ground Up 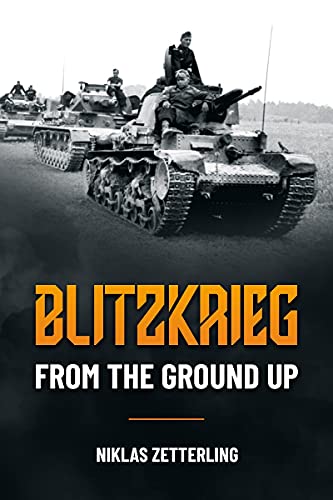 Most histories or operational analyses of the German Blitzkrieg of 1939–1941 put a heavy emphasis on the role of the tank and airplane in creating this new method of waging war. However, author Niklas Zetterling, a former historian at the Swedish Defense College, provides a very different perspective by examining blitzkrieg not as a revolutionary means of waging war, but as a logical extension of exiting German operational art brought to its fullest capability. Using a number of small unit battles as case studies, this volume looks at how blitzkrieg was actually conducted at the company and battalion level, highlighting that many of these battles were not decided by tanks or aircraft, but infantry exercising initiative and small unit tactics.

Like all the European powers in the aftermath of the costly warfare of World War I, Germany tried to create a new means of restoring maneuver to the battlefield and avoid the bloody battles of the Western Front that produced no decisive result. Taking their cue from the traditional German emphasis on initiative, offensive spirit, and delegation of authority to junior commanders, the Germans tried to fit the new capabilities provided by more reliable tanks and aircraft into new doctrine and tactics to restore mobility to the battlefield and achieve a quick and decisive victory over an opponent.

However, as the author shows, even with the quick rebuilding of the German army and new Luftwaffe in the late 1930s, there were significant shortcomings in the vaunted German war machine that invaded Poland in September 1939. The German army was still heavily reliant on marching infantry and horse-drawn equipment in this campaign, and many of the German tanks were under-armored and poorly armed.

In spite of the propaganda put out by the Germans after the unexpectedly quick campaign against Poland, aided significantly by the treachery of the Soviets in overrunning the eastern half of the country, the blitzkrieg was anything but the smooth war machine depicted by Nazi boasting. Between the winter of 1939 and the spring of 1940, the German army absorbed a tremendous number of lessons learned and underwent a significant amount of training and reorganization prior to the campaigns of 1940.

Interestingly, the author spends a great deal more time analyzing the German seizure of Norway than many narratives covering the blitzkrieg and makes the fascinating point that the German operation was the first truly combined operation of the war, involving not only the German army and Luftwaffe, but the only significant campaign carried out by the German navy. The ensuing hard-fought German victory against both terrain and the Allied forces that eventually included British, French, and Polish troops was in many ways the ultimate depiction of blitzkrieg in its true operational nature, since tanks played a minimal role in the harsh Norwegian terrain, and most of the actions fought were small unit actions that showcased the German emphasis on initiative and offensive mindset of junior officers.

The German offensive into Western Europe also receives a more critical look. The Germans were, in fact, outnumbered by the combined Allied forces of France, Britain, Holland, and Belgium, but the lack of coordination between the Allies and the desire to defend territory as far forward as possible, similar to their World War I strategy, made possible the ultimate German breakthrough from the Ardennes Forest that drove to the English Channel, trapping most of the Allied forces in Belgium. But even under these circumstances, the Germans did not realize the true potential of their potential victory, halting their Panzer units while marching infantry caught up to protect the extended German flanks, giving the Allies the crucial time needed to organize the Dunkirk evacuation, allowing the British to carry on the war after the defeat of France.

However, now the Germans were stymied. Their Luftwaffe was not designed as a strategic air force to bomb England into submission or prepare the way for a German invasion across the Channel, and ultimately Hitler turned his attention to the Soviet Union where the fatal flaw of their blitzkrieg doctrine became apparent.

When the Nazis invaded the Soviet Union in June 1941, they expected to quickly overwhelm and defeat the Russians as they had the rest of Europe. However, the Russians had vastly more territory to maneuver and after several significant encirclement battles that captured thousands of Russian troops, the Germans simply became casualties of time and distance—challenges that wore out machines, strained logistics, and prevented the annihilation of the Red Army before the atrocious Russian weather become the deciding factor in the 1941 campaign. The inability of the Germans to capture Moscow would soon doom the Germans to a long war of attrition they could not win.

The author does a tremendous job offering this different perspective on the first two years of World War II in Europe. The Germans were able to integrate tanks and airplanes into their training and doctrine better than their enemies at the beginning of the war, merging traditional German operational art with these new weapons, but ultimately, the Nazis suffered from the same challenges their predecessors did—how to achieve decisive results that lead to terminating the war on favorable terms. Hitler had no intention of stopping the war before dominating all of Europe, and when his military reached the limits of its logistical and operational capabilities, Germany ultimately found itself in a resource war it could not hope to win.